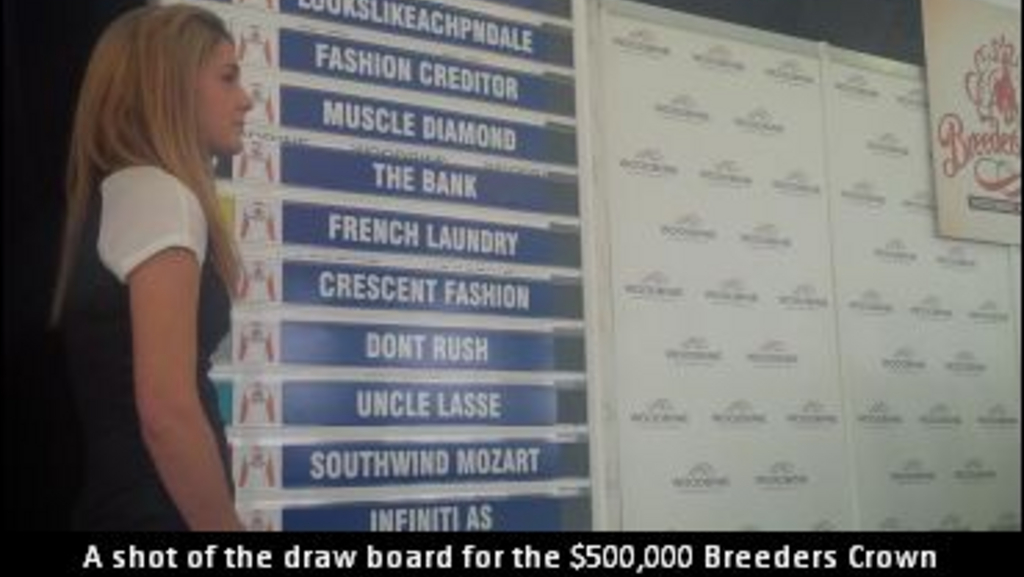 The post positions for the three-year-old colt trot appear below.

The post positions for the three-year-old colt pace appear below.

For the first time in three years, Woodbine Racetrack will again host the Breeders Crown, harness racing’s most spectacular evening, when 12 championship finals, offering more than $6 million in purse money, will be staged on Saturday.

It’s the richest day of horse racing in Canada as North America’s best two-year-olds, three-year-olds and older pacers and trotters will be in the spotlight seeking to claim divisional and possibly Harness Horse of the Year honours. TSN2 will air a special one hour telecast across Canada from 9:00 – 10:00 p.m. and will televise two of the 12 Crown finals live, the $500,000 Three-Year-Old Colt Trot at 9:19 p.m. and the $531,250 Three-Year-Old Colt Pace at 9:44 p.m. ET.

The Breeders Crown concept was unveiled on October 5, 1984 at The Red Mile in Lexington, Kentucky with a Two-Year-Old Colt Trot, while a number of other tracks, including Mohawk, also staged one of the divisional races that year.

Since then, not only have the number of Crown finals increased, but certain divisions were contested at specific tracks, such as the Meadowlands and Woodbine, which hosted eight Crown races for two and three-year-olds in 2009. However, in 2010, Mohegan Sun at Pocono Downs in Wilkes-Barre, Pennsylvania became the first track to stage all 12 Crown races. Woodbine became the second such track to do so in 2011 and 2012. In 2013, the 12 Breeders Crown finals returned to Pocono Downs while the Meadowlands hosted the 2014 edition.

Woodbine Racetrack will have hosted a leading 88 Breeders Crown races at the conclusion of Saturday’s card.

Also on hand for Tuesday’s draw was driver Yannick Gingras, who will drive in nine of the 12 Crown races and is heavily-favoured in several of them. Gingras has won 10 Breeders Crown titles (11 overall) in the past three years, including four last year at the Meadowlands.

“It’s a great thrill, not only to be in the Breeders Crown, but the last few years I’ve had great horses to drive in it,” said the 36-year-old Gingras, a Quebec native who now lives in New Jersey. “To be able to win some of the races makes it very enjoyable. This is as big as it gets. It all comes down to the Breeders Crown; that’s the old saying, but it’s the truth. Thankfully and luckily, I’ve been able to do well in it lately.”

Last year, Gingras set a career high with 556 wins and led all drivers in North America in purses with $17.29 million, the fourth highest total in history. He was voted Driver of the Year by the U.S. Harness Writers Association.

Three of Gingras’ drives in this year’s Breeders Crown are with past champions: Mission Brief, Pinkman, and 11-year-old Foiled Again. “Every win is special with him,” Gingras said, about Foiled Again. “He’s the greatest horse I’ve ever driven.”

Last Friday and Saturday, eliminations were held for many of the championship finals, with the winners being guaranteed a post position between 1-5 before the balance of the field was drawn.

No eliminations were required for the $500,000 Three-Year-Old Colt Trot. Pinkman (PP1, Yannick Gingras, 3/5), trained by Jimmy Takter, has dominated his division this year, highlighted by a victory in the famed Hambletonian in August at the Meadowlands. Since then, he’s also taken the Canadian Trotting Classic at Mohawk and the Kentucky Futurity at Lexington, his 11th win in 15 outings this year. Overall, Pinkman has won 17 of 23, including last year’s Crown Two-Year-Old Colt Trot and has earned over $2.4 million.

While the $531,250 Three-Year-Old Colt Pace does not include divisional leader Wiggle It JiggleIt, who was not eligible for the Crown, it does have Freaky Feet Pete (PP4, Trace Tetrick, 9/5), a winner of 21 in 24 career starts, who upset Wiggle It JiggleIt in the ISS Superfinal at Hoosier Park on October 10, then won his Crown elim last Saturday in 1:49.4.

Wakizashi Hanover (PP3, Tim Tetrick, 5/2) has earned over $1.2 million this year while winning 11 of 18, including the Pepsi North America Cup in June. Artspeak (PP5, Scott Zeron, 3/1) upset Wakizashi Hanover last week in the second elim, scoring by a neck in 1:51.3, his sixth win in 16 starts this year and is the field’s money leader with $1.6 million.

Some of the other stars showcased on Saturday include 2013 Harness Horse of the Year Bee A Magician, who is also a two-time Breeders Crown champion, older pacer Foiled Again, the 2013 Crown winner and richest harness horse in history with over $7.1 million in earnings, once beaten two-year-old colt trotter Southwind Frank and a trio of undefeated juveniles - two-year-old filly pacer Pure Country, two-year-old filly trotter Haughty and two-year-old colt pacer Control The Moment. Other former Crown winners competing Saturday night are Anndrovette, Mission Brief, Shake It Cerry, McWicked and Intimidate.

The evening gets underway at 6:30 p.m. with the $250,000 Mare Trot. D One (PP6, David Miller) is one of three millionaires in the field, a winner of five in eight starts this year, including the Fresh Yankee at the Meadowlands and Muscle Hill at Vernon Downs. Shake It Cerry (PP7, Johnny Takter) is a two-time Crown winner as a two and three-year-old and boasts career earnings of over $2.3 million. Both are daughters of 2007 Horse of the Year Donato Hanover. Classic Martine (PP3, Tim Tetrick) has earned over $1.1 million.

Next up is the $600,000 Two-Year-Old Filly Pace at 6:53 p.m., topped by elim winners Pure Country (PP3, Brett Miller) and Yankee Moonshine (PP5, Yannick Gingras). Pure Country, a daughter of 2008 Horse of the Year Somebeachsomewhere is a perfect nine-for-nine for trainer Jimmy Takter, including an easy two and three-quarter length win last week in 1:52.3. Yankee Moonshine, a Ron Burke trainee, took her elim by two lengths in 1:53.4.

Southwind Frank (PP5, Yannick Gingras) heads the $600,000 Two-Year-Old Colt Trot at 7:17 p.m. A winner of 10 in 11 outings for trainer and co-owner Ron Burke, the son of Muscle Hill took his elim in effortless fashion last Friday, by five lengths in 1:55.2. He also won the $373,000 William Wellwood at Mohawk on September 19. Tony Soprano (PP7, John Campbell) has starred in Ontario Sires Stakes this year for conditioner Bob McIntosh, while Lagerfeld (PP6, Johnny Takter) has won three of nine, including a rich Pennsylvania Sires final at The Meadows on September 11.

The $600,000 Two-Year-Old Filly Trot at 8:06 p.m. has elim winners Haughty (PP5, Dave Palone), All The Time (PP4, Yannick Gingras) and Caprice Hill (PP10, Tim Tetrick). Haughty, another Donato Hanover filly, is unbeaten in seven starts and scored by three lengths last Friday in 1:59 for trainer Jimmy Takter. Caprice Hill, trained by Tony Alagna, was upset last week, at 1-5, by All The Time but has won seven of nine, including the $410,000 Peaceful Way at Mohawk on September 19 while earning a race high $509,223. All The Time, a Muscle Hill filly, won her elim by four lengths in a snappy 1:56.1.

The $500,000 Three-Year-Old Filly Trot at 8:30 p.m. is headed by Mission Brief (PP7, Yannick Gingras), a winner of 17 in 24 starts, over $1.4 million in earnings and runner-up to Pinkman as the favourite in this year’s Hambletonian. The daughter of Muscle Hill, trained and co-owned by Ron Burke, was upset by Wild Honey in the October 10 Kentucky Futurity, though, in her last outing. Wild Honey (PP3, John Campbell) has won six of 13 this year for trainer Jimmy Takter and sports career earnings of over $1.2 million.

The $600,000 Two-Year-Old Colt Pace with a 8:54 p.m. post time is topped by the undefeated Control The Moment (PP3, Randy Waples), a perfect eight-for-eight, including the Metro, and $453,673 for trainer and co-owner Brad Maxwell. The son of Well Said scored a hard-fought elim win by a neck in 1:52.1. Racing Hill (PP1, Brett Miller) took his elim by almost three lengths in 1:52, his fifth victory in nine starts for trainer Tony Alagna.

Following the Three-Year-Old Colt Trot at 9:19 p.m. and the Three-Year-Old Colt Pace at 9:44 p.m., the $250,000 Breeders Crown Mare Pace goes postward at 10:09 p.m. and includes Anndrovette (PP4, Tim Tetrick) and Venus Delight (PP9, Jason Bartlett). Again, no elims were required. Eight-year-old Anndrovette, a two-time Crown winner, has earned over $3.4 million while winning 44 races in her remarkable career. Venus Delight has won two in a row, including the $300,000 Milton at Mohawk on September 26.

The $531,250 Breeders Crown Open Trot at 10:34 p.m. has attracted an elite field of seven, including two-time Crown champion Bee A Magician (PP4, Brian Sears), a career earner of over $3.7 million. The five-year-old daughter of Kadabra, trained by Nifty Norman, has won 41 races overall. This year, her victories include the $680,000 Maple Leaf Trot September 19 at Mohawk. She comes into the Crown off a sixth place finish to Papagayo E in the $1 million International Trot at Yonkers on October 10.

Her competition includes two other millionaires, Creatine (PP6, Johnny Takter), a career earner of over $1.8 million who was third in the International Trot and Intimidate (PP5, Sylvain Filion), the 2012 Crown champ as a three-year-old but winless in 11 starts this year.

The last of the 12 championship races will be the $400,000 Breeders Crown Open Pace at 10:59 p.m. and brings together seven millionaires, headed by the sport’s all-time money winner, Foiled Again (PP4, Yannick Gingras). Now 11, the gelded son of Dragon Again has only won two of 18 this year, including his elim in 1:50. Overall, he’s won 85 races, including the 2013 Crown Open Pace.

Always B Miki (PP3, David Miller), although not a millionaire yet, will likely be the favourite off his elim win in 1:49.4 last Saturday, only his second start of the year. Trained by Jimmy Takter, Always B Miki also won a Crown elim last year as a three-year-old, but was forced to scratch from the final, which was won by Mcwicked, another rival on Saturday.

Since 1984, including eliminations, John Campbell leads all drivers with 47 wins and over $21.7 million in Breeders Crown purse earnings. Jimmy Takter heads all trainers with $9.4 million in purses, including 21 wins, while Kentucky’s Brittany Farms is the leading owner with $7.1 million in purses while winning 16 races. Pennsylvania’s Hanover Shoe Farms tops all breeders, with 22 wins and $14.5 million in purses.

Among the marketing activities on Breeders Crown night are WEG’s First Bet On Us $2 voucher and a free toque (while supplies last), available on the 3rd Floor; $10,000 in Instant Cash Giveaways (wager through a self-serve wagering terminal at Woodbine for 100 chances to win $100) and a mandatory Jackpot Hi 5 payout on Race 13 (the carryover pool is currently at $557,000) scheduled for 11:27 p.m.