Breeders Crown Elims In The Books 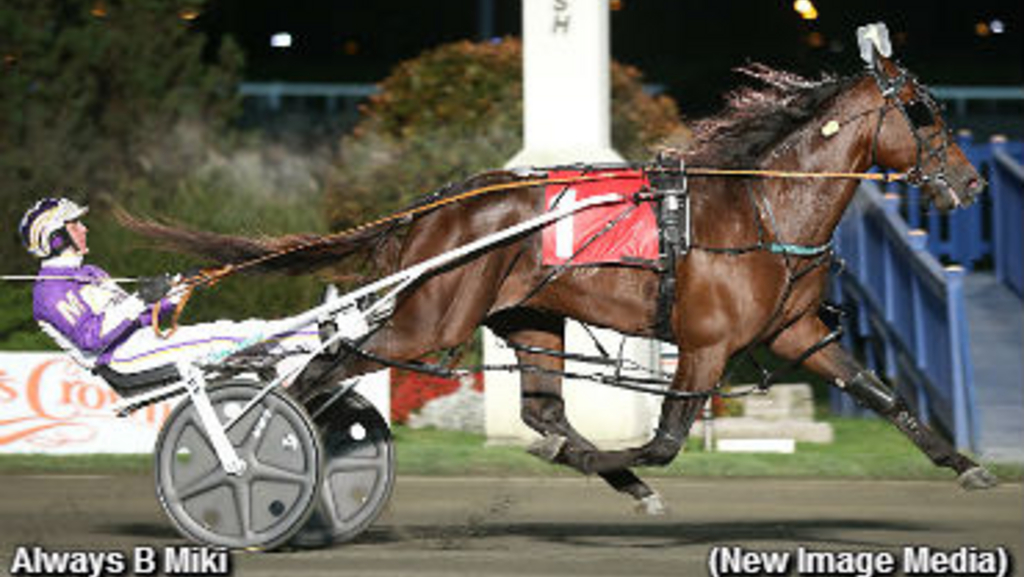 The sport’s brightest freshman stars were in the spotlight Friday evening at Woodbine Racetrack, but Saturday night belonged to the older divisions and the sophomore class.

Trot Insider has recapped all of the elimination action leading up to next Saturday's Breeders Crown championship night.

Here's how things played out on Saturday evening at Woodbine Racetrack:

Always B Miki was triumphant in the second elimination in what was just his second start of the season for trainer Jim Takter, who had high praise for the pacer following his facile win in 1:49.4.

David Miller landed fourth in the early going with the lightly-raced speedball, who watched State Treasurer supply first-half fractions of :27.1 and :55.2. Miller right-lined Always B Miki in the backstretch and started to cut into the lead with every stride. State Treasurer was still the boss at the three-quarter pole in 1:23, but he drifted off the rail in the lane while starting to tire. Always B Miki, on the other hand, was just starting to go to work. The 2-5 favourite fired home in :26.2 and drew clear to win by three lengths over Bettors Edge. The final cheques were earned by State Treasurer, Mach It So and All Bets Off.

“He’s a fantastic horse,” Jimmy Takter said. “We had a long journey here; we had a big bump in May when he got reinjured in the other leg, so I’m really, really pleased to see this horse [win], because he’s really a special animal, and he’s a very popular horse in the sport, with so many people asking about this horse. Seeing him come back, I thought he looked pretty darn good. I’m so pleased to be a part of his life.

“This horse has the right determination, an extremely great set of lungs, and, like David [Miller] said last year, he had some problems steering him, but the horse never got tired,” Takter also said. “Like in the Meadowlands Pace, he was three-wide and finished second; the whole race he was outside. Standing here, I was nervous; I didn’t like post one. But when they went off, I knew he was going to be right there.

“You’ve got to be patient with them,” Takter also said regarding Always B Miki’s return to racing. “An injury takes time [to heal], and you have to listen to him [the horse]. He did very well; he was standing in his stall for a long time, and a lot of horses get frustrated doing that. He was able to keep his weight, so it’s a heck of a story really. For this horse, he won the Breeders Crown elimination last year [in the three-year-old colt pace], and never got an opportunity to show what a great horse he was in the final.”

The four-year-old son of Always A Virgin-Artstopper won for the 16th time in his career while pushing his bankroll to $962,817. He is owned by Bluewood Stable, Roll The Dice Stable and Christina Takter.

Foiled Again came first-over and drew away from a much younger group of foes in his Breeders Crown elimination for the team of driver Yannick Gingras and trainer Ron Burke.

Gingras landed the charismatic campaigner into the three-hole while Melmerby Beach fired to the front and threw down first-half fractions of :26.1 and :54.2. Foiled Again was first over and driving on the way to the three-quarter pole, which belonged to Melmerby Beach in 1:22.1. Gingras asked and Foiled Again gave all he had in the lane, and the veteran fired home in :27.2 to win by 1-1/2 lengths over race favourite JK Endofanera in 1:50. Arthur Blue Chip, Melmerby Beach and Mcwicked also punched tickets to next week’s final.

"Every win is special with him," said Yannick Gingras the winning driver. "He's the greatest horse I've ever driven.”

The driver suggested that the wins have come with more spacing this year in parts due to Foiled Again's age and an abundance of poor post positions.

"When he draws outside you have to use him too much early and he just can't finish after that. Usually I know how good he's going to be when we come through the final turn," said Gingras. "Tonight he latched on to me and I knew they weren't going to beat him."

Sent off at odds of 8-1, Foiled Again won for just the second time this season and for the 85th time in his career. The 11-year-old son of Dragon Again-In A Safe Place, who owns a bankroll in excess of $7 million, is owned by Burke Racing Stable LLC, Weaver Bruscemi LLC and JJK Stables LLC.

Divine Caroline catapulted off cover in her elimination for driver David Miller, and she drew away from the competition with the greatest of ease en route to posting a 1:51.3 triumph and extending her winning streak to three-in-a-row.

The daughter of Rock N Roll Heaven-Loving Caroline got away sixth while Sassa Hanover led the field through fractions of :26.2, :55.4 and 1:24.1. Miller worked out a second-over trip in the backstretch for Divine Caroline, and she tracked her cover all the way to the three-quarter pole before tipping wide in the drive to the line. She uncorked a :26.4 closing panel to win by 2-3/4 lengths over Bedroomconfessions. Rounding out the cheque earners were Sassa Hanover, Mosquito Blue Chip and Stacia Hanover.

“She’s very good in coming off the pace,” trainer Joe Holloway said.”She’s blossomed inside of the last month and it’s a good time of the year. It’s tough for horses to stay good all year.”

“Earlier in the year Bettor Be Steppin was the better of the two and right now Caroline’s racing great,” Holloway added. “Earlier in the year she wasn’t winning, but she wasn’t getting beat by much. She seemed to put it together as of late. She’s gotten bigger. Through the course of the summer, she’s grown almost a hand. She’s a tall mare, starting to fill out. I think she’s going to be a force next year because she’s going to be so much bigger and stronger.”’

The seven-time winner races for Val Dor Farms, Ted Gewertz, Rojan Stables and Michael Ouriel. The partners watched the filly go 1-for-11 last season, but she’s taken her game to a whole new level this year as noted in her 6-for-19 record. She’s banked more than $472,000 to date.

Solar Sister was treated to a ground-saving trip in the opening half of $32,465 elimination, and she went on to post a one-length triumph in 1:52.1 for Team McNair.

Doug McNair got away third with the recent OSS Super Final champ, while Southwind Roulette stole away with soft fractions of :27.1 and :57. McNair had his charge first-over going into the final turn, and together they applied serious pressure on Southwind Roulette to the three-quarter pole in 1:24.3. Solar Sister then used a :27.1 closing panel to secure the win. The previously undefeated Frost Damage Blue was a game runner-up, with Southwind Roulette fading to finish third. Also advancing to the final were The Show Returns and Bettor Be Steppin.

"I was able to sit with her for five-eighths of a mile. She's actually very good coming from off the pace," Doug McNair said.

The homebred daughter of Mach Three-Cabrini Hanover hangs her harness bag in the barn of Gregg McNair, who trains the sophomore for Ontario partners David Willmot of King City and Clay Horner of Toronto. The win was her eighth of the season from 15 tries, and the lion’s share of the loot lifted her cash stash to $722,323.

Artspeak rained on Wakizashi Hanover’s parade even though the Pepsi North America Cup winner managed to steal away with a pedestrian first half of :57.3

Scott Zeron tucked Artspeak into the five-hole early while Wakizashi Hanover did his best to lull the field to sleep through fractions of :28.2, :57.3 and 1:25. Artspeak latched onto cover while racing second over in the backstretch, and when Zeron swung him wide coming off the final the Tony Alagna trainee grew wings. The son of Western Ideal-The Art Museum uncorked a :26-second closing quarter en route to winning by a neck over the heavily-favoured Wakizashi Hanover. In The Arsenal, Lost For Words and Dealt A Winner nabbed the remaining cheques in the $32,465 tilt.

“I’ve gone on record many times saying that this horse had a lot of things not go his way earlier in the year,” Alagna said. “[There] were too many weeks in a row in his schedule; weeks that you couldn’t pass up for the amount of money they were going for. But, he’s as good right now as he’s ever been. Scott [Zeron] said today he was better in [1]:51[.3] than he was at Lexington in [1]:47 and change.

“Concerned was probably the best way to put it,” Alagna also said in regards to his reaction towards the slow fractions in the race. “When the race is setting up that way, you know your horse can sprint, but it’s so important to win these eliminations so you have a chance at a decent draw. Just that he was able to get up for the win means a lot.”

“Earlier in the year, when he had the North America Cup, the [Max] Hempt, Meadowlands Pace, and the New Jersey Classic, that was seven weeks in a row and the horse just doesn’t recover like a standardbred,” Alagna also said. “He’s very much more like a thoroughbred; if he can just have a week off here and there in his schedule, he’s as good as ever.”

Sent off at odds of 3-1, Artspeak improved his 2015 record to 6-4-1 from 16 starts with the win. He’s earned more than $1.6 million to date for the partnership of Brittany Farms, Marvin Katz, Joe Sbrocco and In The GYM Partners.

Freaky Feet Pete, who was a $62,500 supplement to this year’s Breeders Crown, was a dominant winner in 1:49.4 in his $32,465 elimination for the team of driver Trace Tetrick and trainer Larry Rheinheimer.

Tetrick got away third with the son of Rockin Image-Skyway Lori while Reverend Hanover fired to the front and supplied the field with first-half fractions of :27.1 and :56. Tetrick right-lined Freaky Feet Pete in the backstretch, and he applied heavy pressure on Reverend Hanover to the three-quarter pole in 1:23 before putting away that foe in deep stretch. Freaky Feet Pete’s final quarter of :26.2 propelled him to the win by 1-1/4 lengths over Artistic Major. Reverend Hanover, Dudes The Man and Penji Hanover also advance to next Saturday’s final.

“We’re pretty proud of him,” trainer Larry Rheinheimer stated. “We’ve always liked him real good and we’ve always been high on him. We’re giving him a chance.”

Anyone who has watched the development of this colt had to feel good that Rheinheimer opted to pay the supplement and showcase him to the racing world.

“We talked about it earlier, then it got a little bit harder, but then he raced good,” Rheinheimer said.

It was the convincing win over Wiggle It Jiggleit, who had beaten him earlier in the season at Hoosier Park, that convinced Rheinheimer to take the shot and literally buck up.

“I was hoping to get a trip with him,” Rheinheimer said.

The homebred races for Indiana partners Mary Jo Rheinheimer of La Grange and Marty Rheinheimer of Howe. The victory improved his 2015 record to 12-2-0 from 14 starts and it pushed his lifetime earnings to $633,082.

The draw for the $500,000 Breeders Crown Three-Year-Old Colt and Gelding Pace will take place on Tuesday, Oct. 20 at a press conference hosted by Woodbine Racetrack.

(With quotes from Breeders Crown)