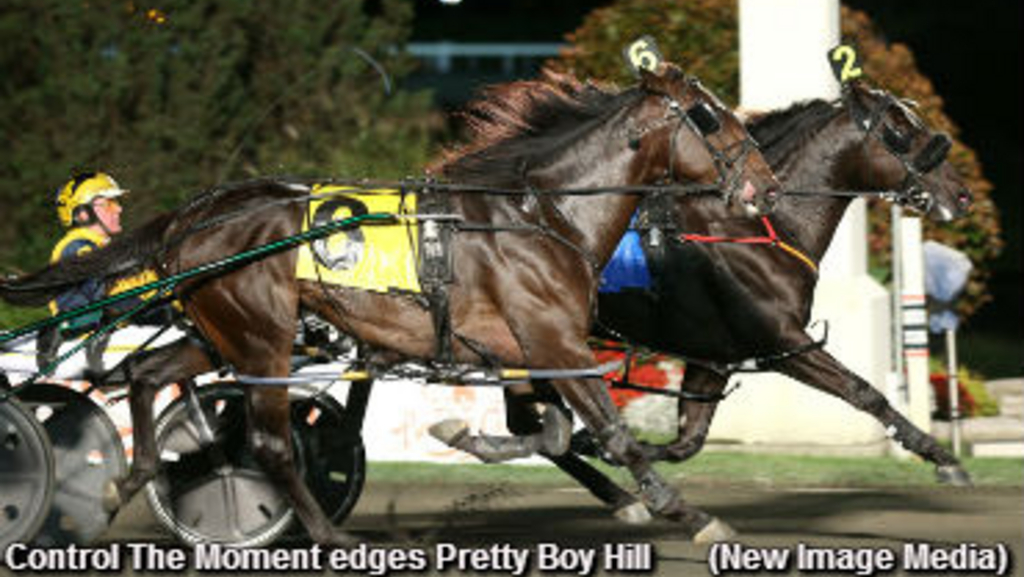 The first round of Breeders Crown eliminations was contested on a chilly and windy Friday evening at Woodbine Racetrack, and a long list of rookie stars strutted their stuff.

Here's what transpired over the course of the 12-race card:

Control The Moment, who was making his first start since winning the $685,000 Metro Pace at Mohawk Racetrack on September 5, fended off late pressure to capture his elimination in 1:52.1.

The son of Well Said-Lifesliltreasure entered the $25,972 contest with a 7-for-7 record, and Randy Waples called on the colt to lay down the speed in his quest for an eighth straight win. The pacer ripped through fractions of :27.1, :55.3 and 1:24 before digging in for a final frame of :28.1. He prevailed by a neck over Pretty Boy Hill. Rounding out the top five finishers were Betting Line, American Passport and Nvestment Bluechip.

"He was getting tired at the end," said winning driver Randy Waples. "It's a windy night and I had to cut it. I would rather have Yannick (Pretty Boy Hill) on my back than Scott (Zeron behind the streaking American Passport) but he nearly beat me.

"It's tough to have that kind of break between races with this type of horse. They need to be raced to be tight," Waples continued.

Trainer Brad Maxwell co-owns the photogenic rookie with partners Howard Taylor, Edwin Gold and Ben Mudry. The group has watched the freshman stash away more than $450,000 to date.

Racing Hill has taken his game to a whole new level since being added to the Lasix program by trainer Tony Alagna, who watched the speedy colt power to a 1:52 decision in his $25,972 eliminations.

Brett Miller rolled the rookie to the lead and had the field chasing them past the quarter pole in :28. Spider Man Hanover blasted out of the three-hole in the backstretch and reached the lead going to the half in :56.3. He proceeded to the three-quarter pole in 1:23.3 before being confronted by Racing Hill once again. Miller tipped his charge off the rail and used a :28-second closing quarter to win by 2-3/4 lengths over Boston Red Rocks. Rounding out the top five finishers were Spider Man Hanover, Big Top Hanover and Travel Playlist.

“He’s just getting stronger every start,” Alagna said. “You couldn’t have put any better series together. He couldn’t be coming into these races any better.”

“There for a little while he wasn’t just quite as sharp, and every time I’d scope him he’d have a lot of allergy mucus, so I put him on Lasix just basically to dry his head up a little bit and it really seemed to do the trick,” Alagna added. “Now he’s getting his confidence back.”

The homebred son of Roll With Joe-Chasing Ideals is owned by Tom Hill of Hamilton, ON. The victory improved his record to 5-0-2 from nine starts this season and his share of the loot lifted his earnings to $139,628.

All The Time went to the front and didn’t look back en route to posting a decisive score in her elimination in 1:56.2 for driver Yannick Gingras and trainer Jimmy Takter.

Gingras hustled her to the lead from 6 and after whacking out fractions of :28.1, :58.1 and 1:27 she stormed home in :29.1 to win by four lengths over race favourite Caprice Hill. Black Broadway, Tymal Tempest and Dewdle All Day also advanced to the final.

The victory was the fifth of the season from nine tries for the homebred daughter of Muscle Hill-Cantab It All. The career winner of $148,010 is owned by Ontario partners Marvin Katz of Toronto and Al Libfeld of Pickering.

Haughty kept her perfect record intact winning her $25,972 elimination in 1:59 for driver Dave Palone and trainer Jimmy Takter. She was 6-for-6 going into her assignment, and she rallied past the tired leaders to win for the seventh time in her career.

Palone got away fifth with Haughty while Kathy Parker led the field through first-half fractions of :28.3 and :58.1. Broadway Donna, who was 9-for-9 going into the race, circled up to take the lead shortly past the half, and after opening up a comfortable lead around the final turn she rolled into a break. Kathy Parker recaptured the lead at the head of the lane, but she was overtaken late by Haughty who only needed a :30.4 closing panel to win by three lengths. Magical Wonder rallied for second, with Kathy Parker taking home third prize. Also advancing to the final will be Womans Will and Emoticon Hanover.

“She was really late to get ready,” Takter said. “She’s got a long way to go still, but one thing about her is she has the right desire. She likes to win and she’s got good lungs. It’s terrible weather here – it’s cold and windy – but she knows how to do it. This to me on paper was a very deep and good class field. She’s going to be all right. I think she has a heck of a shot for the final.”

Al Libfeld of Pickering shares ownership on the filly with Toronto partners Marvin Katz and Sam Goldband. The youngster has banked $72,236 to date.

Pure Country toted her 8-for-8 record into the $25,972 first elimination, and she had no problem remaining perfect for the team of driver Brett Miller and trainer Jimmy Takter.

Miller tucked the 1-5 favourite into the three-hole while Lyons River Pride rolled the field through fractions of :28.1, :56.2 and 1:24. Pure Country was first-over and pressing the leader at the three-quarter pole before rocketing home in :28.2 to win by 2-3/4 lengths over Darlinonthebeach in 1:52.3. Lyons River Pride was third. Also advancing to next week’s final will be Mayhem Seelster and Shezarealdeal.

Diamond Creek Racing of Wellsville, PA bred and owns the daughter of Somebeachsomewhere-Western Montana, who lifted her lifetime earnings to $392,954 with the victory.

Yankee Moonshine captured her $25,972 elimination in come-from-behind fashion of the tandem of driver Yannick Gingras and trainer Ron Burke.

The daughter of Yankee Cruiser-Bootleg Yankee was buried on the rail near the back of the pack for most of the mile while Call Me Queen Be, Soft Idea and Blue Moon Stride took turns on the lead through panels of :27, :56.2 and 1:24. Gingras angled his charge off the pylons coming out of the final turn and his filly exploded home in :28.3 to win by a pair of lengths in 1:53.4. Call Me Queen Be, Soft Idea, Blue Moon Stride and Skinny Dipper rounded out the top five finishers heading to next week’s Breeders Crown Final.

“She’s a really nice filly,” Gingras said. “She was good in (Pennsylvania) and then she tailed off a little bit, but the last three weeks she’s been really good. She was good in Indiana. She was vicious last week in Lexington. She was first up against a really good filly, but she never quit. She was still trying in the stretch. She proved tonight she belongs with the top of the class.”

The race featured several lead changes, but it was Yankee Moonshine, seemingly emerging from nowhere, that finished on top.

“I was in a pretty back spot there,” Gingras said of his position heading into the stretch. “But she was running in pretty hard around the last turn, so it was hard for me to get her out three wide around (Rock Me Baby), so I took a chance to go back to the inside and hoping to be fifth. But they weren’t pacing that strong up front and she was loaded with pace, so once I got daylight she did the rest.”

Sent off as the 8-5 favourite, Yankee Moonshine improved her rookie record to 3-3-4 from 11 starts with the victory. The career winner of $139,337 is owned by Burke Racing Stable LLC, JT45 LLC, Larry Karr and Weaver Bruscemi LLC.

Southwind Frank barely broke a sweat in winning his $25,972 assignment in 1:55.2 for driver Yannick Gingras. The photogenic son of Muscle Hill-Flawless Lindy marched to the top and after chopping out fractions of :28.2, :58.3 and 1:27.1 he used a :28.1 closing quarter to win by five lengths over Marion Marauder. Will Take Charge rounded out the top three in the lone eliminations. Also advancing to next week’s final are Milligans School, Deep Impact, Sliding Home, Dupree and Muscles For Life. Accepting byes to the final were Tony Soprano and Lagerfeld.

“He was good here at Mohawk about a month ago [in the $373,000 William Wellwood Memorial], but Ronnie [Burke] thought he was getting a little tired,” Yannick Gingras said. “He gave him a few weeks off and freshened him up before the second week of Lexington. He was vicious there last week, and he was just as good here tonight. He completely wrapped up; he could not have done this any easier.”

(With quotes from Breeders Crown)