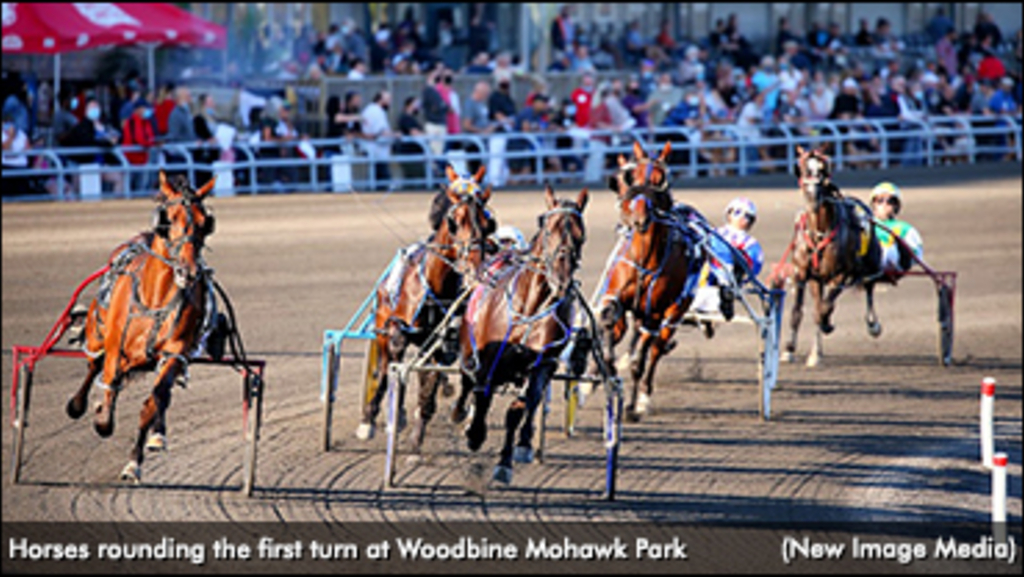 The September to remember at Woodbine Mohawk Park powers into the Saturday (Sept. 11) program with more than $3 million in purses up for grabs in several stakes events, highlighted by the $1 million Pepsi North America Cup.

Its sister event, the $425,000 Fan Hanover final, goes as Race 8 on the card and features a match up between 2020’s freshman champion and the 2021 rising star among the sophomore pacing filly division. Fire Start Hanover, the Dan Patch Two-Year-Old Pacing Filly of the Year, picked Post 4 after storming through traffic to win a last-to-first scenario in 1:51.1. She scores to the right flank of Hot Mess Express, who ran a seven race win streak up to the $250,000 James Lynch before rebounding with a 1:50.3 victory in her elimination last week. Dexter Dunn drives Fire Start Hanover for trainer Richard “Nifty” Norman while Andrew McCarthy steers Hot Mess Express for Tony Alagna.

Glamour boys also star on the trot in the Cup undercard with the $240,000 Goodtimes final, which also features 2020 William Wellwood champ On A Streak. However, leading the charge into the final are Locatelli and Fashion Frenzie, each entering off victories in the eliminations. Locatelli’s was an off-the-pace trip, ranging into the mix before sliding by the field to win in 1:53.2, while Fashion Frenzie fronted his competition to post a 1:53.2 win over Dancinginthedark M. Andrew McCarthy drives Locatelli from Post 3 for trainer Nancy Takter and Louis-Philippe Roy gets the call on Fashion Frenzie from Post 5 for Richard Moreau.

Freshmen will also fight on the stakes-laden card, starting with the trotting fillies in the $392,000 Peaceful Way final. Venerable leads the pack from a facile victory in 1:54.2 by 5-3/4 lengths as the 1-9 favourite. The Richard “Nifty” Norman trainee brings an unbeaten record to the final, having won all six of her starts including the $326,850 Jim Doherty Memorial, and will have David Miller in the sulky from Post 4. She pins her record against another, with Adare Castle risking her pristine card from Post 3 with James MacDonald driving for trainer Mark Etsell. Adare Castle cruised in the other elimination, holding off a late challenge from American Beauty to win by three-quarters of a length in 1:55.4.

The $640,000 William Wellwood Memorial serves as the final appetizer on the stakes card before the million-dollar classic, pinning some of the continent’s top two-year-old trotting colts against one another. Elimination winners Duly Resolved and Temporal Hanover lead the charge – Duly Resolved holding a neck to the beam to win his elimination in 1:55.1 and Temporal Hanover grinding from the pocket to land a neck at the beam with a 1:55.1 effort in the other elimination. Those two also contend with King Of The North, whose unbeaten streak cracked when he gave way in the other Wellwood elimination to Periculum in a 1:54.3 mile. The aforementioned elim winners picked Posts 3, 5 and 4 respectively while the previously-unbeaten King Of The North landed Post 2.

Pacing two-year-olds will get their preps in for the Metro Pace and Shes A Great Lady with a pair of Champlain divisions on the undercard. The colts and geldings go first led with a $213,170 dash by Stonebridge Helios, the John Pentland-trained Sunshine Beach colt who has already won thrice in Ontario Sires Stakes (OSS) Gold competition. Bob McClure steers from Post 8 in a field including Nassagaweya division winner Bob Loblaw, who starts from Post 4 for trainer Ken Middleton Jr. and driver Sylvain Filion.

The division for pacing fillies precedes the Wellwood final and puts Silver Label’s record to the test. The Nick Gallucci trainee has won all five of her starts, including three divisions of OSS Gold – the most recent a 1:51.4 effort. James MacDonald has the drive from Post 5 which includes a pair of runner-up performers from the Eternal Camnation in Smuggle Tina, Post 3, and Big Bettor Hanover, Post 7.

Saturday’s card also features a $40,000 Open Handicap Pace, in lieu of the typical Preferred, as well as a $50,000 Three-Year-Old Open Pace, which gathers several horses who competed in the North America Cup eliminations last week. The card also features a mandatory payout in the Jackpot Hi-5, which is available on the last race on the 13-event card. The Jackpot was frozen after September 4 with a carryover of more than $300,000 rolling into the pool.

Entries for the Saturday card, along with complimentary past performances, are available below: