Parade Of Stars On Display At Hoosier Park 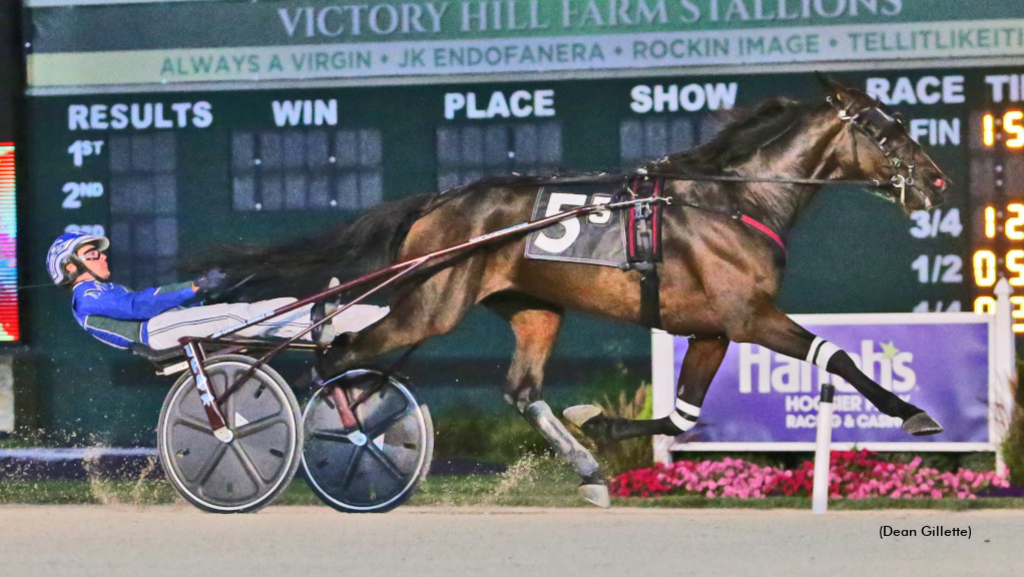 On an evening that featured wins by world’s fastest Standardbred Bulldog Hanover and mare Bella Bellini who defeated males in one of Harrah’s Hoosier Park’s marquee events, the supporting card was far from disappointing as many of the sport’s brightest stars sparkled at the Anderson, Indiana oval.

Hambletonian winner Cool Papa Bell and Hambletonian Oaks winner Fashion Schooner scored in their respective contests on a card that offered more than $1.5 million in purse money and some of the most talented horses in the sport.

Ponda Adventure led the field for the first quarter in :27.1, but Cool Papa Bell was not content to remain in second for long. The son of Chapter Seven-Blk Thai Optional assumed command before the half-mile marker, clicking off fractions of :57.1 and 1:26.3. Ponda Adventure came down the lane with a full head of steam, but Cool Papa Bell would not be denied and used a :26.3 last panel to hit the line in front.

The loss was Ponda Adventure’s first of the year and snapped his 10-race winning streak.

Trained by Jim Campbell, Cool Papa Bell is owned by Runthetable Stables. The colt was bred by Belmar Racing and Breeding.

The win was Fashion Schooner’s fourth in a row and provided with his second win on the evening.

The daughter of Walner-Broadway Schooner took control right after the wings on the gate folded and set fractions of :27.1, :57.2 and 1:25.4. Misswalnerfashion sat in second for the entire mile and applied pressure in deep stretch on the inside while M Ms Dream did the same on the outside.

Fashion Schooner proved too difficult for her rivals to overhaul.

Dexter Dunn and Talent Scout slid along the rail to defeat Jailhouse Dance (Michael Oosting) in the $100,000 for freshman filly trotters in 1:54.1. Texsong Soprono (John De Long) was third.

Talent Scout is a daughter of Swan For All and Prettysydney Ridge. The filly is trained by Doug Rideout for owners Julie Rideout, Alan White, and Dave Gamble.

The filly paid $4.60 to win as the public’s top choice in the field of nine.

Heart On Fire and Dunn parlayed a pocket trip into a 1:55.2 head triumph in the $240,000 Kentuckiana Stallion Management division for two-year-old trotting fillies. Kayleigh S (Brian Sears) was second and Helpoftheseason (Peter Wrenn) was third.

The daughter of Father Patrick-Corazon Blue Chip is trained by Tony Alagna and owned by Crawford Farms Racing. She was bred by Spring Haven Farm and Doug Millard Holdings.

Earthwindfire (Tim Tetrick) pulled away from her rivals in the stretch to capture the $200,000 division of the Kentucky Stallion Management for two-year-old pacing fillies in 1:51.3. Sleazy Mama (Trace Tetrick) was second and Queens Reign (Oosting) was third.

Trained by Brett Pelling, Earthwindfire sat in second behind Nevertellmetheodds (Aaron Merriman) before following Vivians Dream (Jordan Stratton) in her take over of the lead behind splits of :26.2, :54.3 and 1:23.2.

When her driver gave the daughter of American Ideal-Road Bet her cue, she sailed by her competitors and strode to the finish line.

Trained by Aaron Stutzman, the son of JK Endofanera-Sunflower set fractions of :26, :54.3 and 1:22.1. The colt never really encountered an anxious moment throughout his mile.

Yannick Gingras and Ervin stopped the clock in 1:50.4 over nine rivals to capture the $110,000 Elevation for freshman male pacers. Cant Stop Lou (Dunn) was second and Coach Stefanos (Trace Tetrick) was third.

Ervin led the field through a first quarter of :26.3. He and his driver then yielded the lead to Coach Stefanos who paced in :55.3 and 1:23.3. Ervin made his bid just prior to turning for home and out finished Cant Stop Lou with a :26.4 final split.