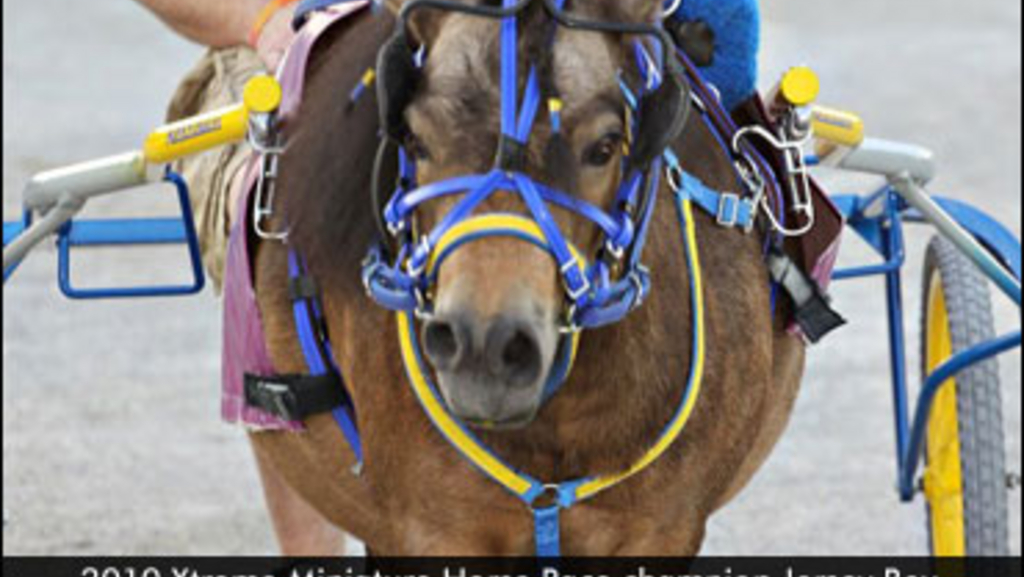 The replays have now been added to Saturday’s recap of the Xtreme Horsepower events and are available below.

The small but mighty Ike fanned wide around the final turn to come on for the victory in the Miniature Horse Race for driver Laurel Williams. Donny Boy Quick overtook reigning champion Jersey Boy down the backstretch but he was collared by Mullingan down the lane with Ike motoring home on the far grandstand side to steal the glory. At 16 years old, Ike was the oldest mini in the 5/8-mile race.

Jimmy Shin and rider Marielle Enberg led from start to finish in the first ever $4,500 Xtreme Trot Under Saddle exhibition race in 1:59.2 over Friendly Amigo (Riina Rekila) and Its On My Tab (Anita Valstad).

“Most of us girls that were riding tonight have been riding before. Most of us are from Europe,” said Enberg, a Swedish native who works for Luc Ouellette and Chris Beaver. “The horse is stabled at their farm so I rode him once before to prepare.”

The new Xtreme event, which is a popular form of racing in Europe, was organized by Emma Burgess, the daughter of trainer Blair Burgess, with the help of Kathy Wade Vlaar, Manager of Industry Marketing at Standardbred Canada, and Jackie Warner, Manager of Marketing & Public Relations at Georgian Downs.

“We were training our horses under saddle. Some of them go out everyday and just enjoy it a lot better than going out in the jog cart so we said why don’t we try to set up something. My mom’s from Sweden so we’re obviously very familiar with the concept," said Emma Burgess. "We just wanted to see if we could get it going and we thought Xtreme Horsepower was a great place to get it going. We just wanted to put together something for the fans to see how versatile standardbreds are and what’s popular everywhere else, and maybe even in the bigger picture open up a second career for some standardbreds who aren’t good at the sulky racing or are older. I know they bet on it in Europe so it could become quite popular here.”

In reply to I was pretty pumped after by Blair Burgess

I just saw it for the first

I just saw it for the first time! I liked it a lot so your right Blair bring this race on a regular basis on the mutual. The girls did a pretty good job! I wouldnt lol but kudos for them.

I was pretty pumped after

I was pretty pumped after watching the under saddle race. With more time and better classification we could put together some pretty competitive races with room for large fields that bettors seem to appreciate. I don t think it's too crazy to make this a regular occurrence and maybe even go pari-mutual with it. Racing needs to stir up all the Interest we can and this angle should certainly be explored. In Europe horses switch back and forth from sulky to under saddle, with the chart indicating such. It's just the same as turf and dirt in the runners. Standardbred Canada and ORC would probably have to create a new Licence category for the riders with a qualification process. Being a driver or trainer is probably not enough in itself. I was amazed how good the riders on Sat. were. They were pretty "game" too.