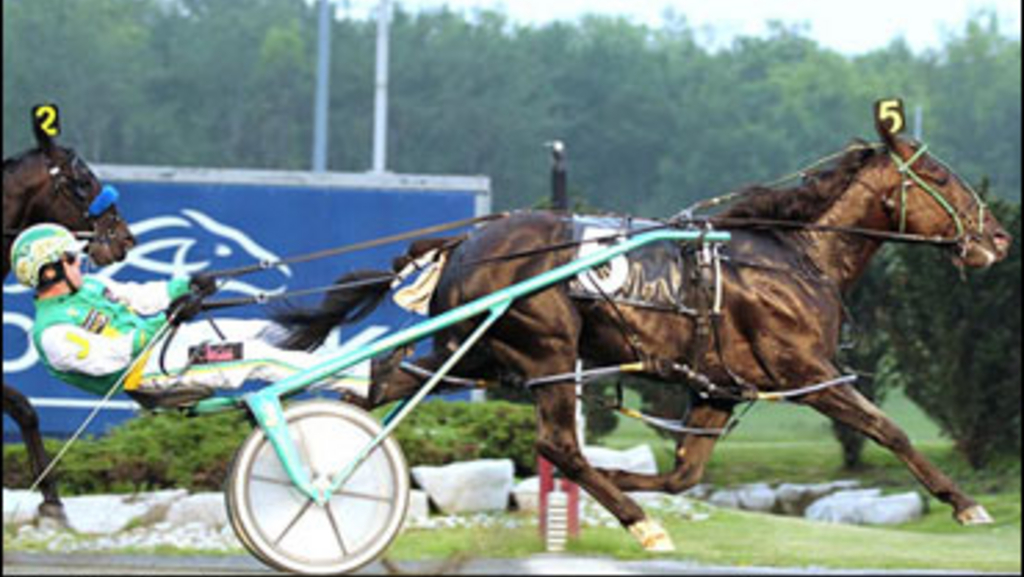 Up The Credit kicked past heavy favourite Big Jim in late stretch to win the first of three $100,000 Somebeachsomewhere Stakes divisions for three-year-old pacing colts in a 1:49 stakes record clocking on Saturday at Mohawk Racetrack

Prodigal Seelster (Randy Waples) took control of the field off the gate with Powerful Mist (Tim Tetrick) firing from Post 7 and tucking into the pocket ahead of 1-9 favourite Big Jim (Phil Hudon).

As Prodigal Seelster raced to the opening quarter in :26.1, Big Jim swept to command and led the way past the half in :54 and three-quarters in 1:21.3 with Rock To Glory (Dave Miller) advancing first up from fifth and Up The Credit and driver Jody Jamieson following cover after sitting sixth in the early going.

As the field rounded the final turn, Powerful Mist had tipped out from third and Up The Credit rolled wide in the stretch. The son of Western Terror-Cantbuymehappiness kicked into high gear and powered past Big Jim with a :26-second final frame to score in a career-best 1:49 flat by one and quarter length. Big Jim settled for second and Powerful Mist finished third.

“It’s better to have a sound horse and a fresh horse than a lame one that’s hurting a bit and can’t go so I just didn’t bother racing him [since The Diplomat], gave him three weeks off, trained him a couple of slow trips and he showed up tonight,” said trainer Carl Jamieson, who co-owns the winning colt with Thomas Kyron of Toronto, Ont., Joanne Morrison of Beeton, Ont. and Brian Paquet of Quebec.

Last year, Up The Credit won two of five races -- defeating Big Jim in a leg of the Dream Maker Pacing Series -- and earned $42,690. At three, he has now won three of four races, finishing second by a nose in his other start. The lion's share of the purse pushes his 2011 bankroll to $105,750.

"We are putting him in the North America Cup," confirmed Jamieson. "That's where we're headed for. He's New York eligible and you won't likely see him in New York stakes this year because we are planning for all the big ones this year if things go right and he stays sound. He's a real good horse. He was good last year, but he had some issues last year and we had to stop with him. He's back on his game right now and we've got our fingers crossed that he hangs on for the summer."

Up The Credit has been assessed at odds of 45-1 in Trot Magazine's 2011 Spring Book.

The second division of the Somebeachsomewhere Stakes produced another upset as Bestofbest Hanover unleashed a :26.4 final frame to prevail in 1:51.2.

Driver Jack Moiseyev settled the Western Hanover-Bunny Lake colt into fourth place off the gate while Rockabillie (Sylvain Filion) took control of the field and posted the first quarter in :27.2. However, pocket-sitter On The Radar (Tim Tetrick) brushed to command down the backstretch before hitting next marker in :56.1.

At the half, 5-2 favourite Drain Daddy (Rick Zeron) moved underway from fifth, but could not get close enough to the leader leaving room for Lookinforadventure (Brett Miller) to move out from third as they neared the third quarter mark in 1:23.4.

With Drain Daddy gapping the cover, Moiseyev maneuvered Bestofbest Hanover out around the turn and sent him wide down the stretch to come on for the 1:51.2 victory, one and three-quarter lengths over Rockabillie. Lookinforadventure (Brett Miller) finished third.

Despite finishing a distanced 10th in his last start at Mohawk on May 30, Bestofbest Hanover rebounded tonight thanks to some equipment adjustments.

“There were a couple of horses leaving on the inside chirping behind the gate and he just went wild and he flipped a palate in his throat,” explained Moiseyev, who drove the winning colt last year when he was at Mohawk. “They put pull out plugs and a mini bit on him tonight and it made a big difference.

“He had a nice easy trip [tonight] and just busted the last quarter. That’s what everyone likes to do when you're starting out at the beginning of the stakes season."

Trained by Daniel Martin for owner L Ecurie Triple P Inc. of Quebec, Bestofthebest Hanover earned his third win of the season in four outings boosting his seasonal earnings to $57,100. As a freshman, he won three of five races and earned $22,640.

Bestofbest Hanover is a 65-1 shot in the Spring Book.

Roll With Joe offered up another surprise in the final Somebeachsomewhere Stakes division, prevailing in a stretch duel with 3-5 favourite Betterthancheddar in 1:49.3.

Driven by Randy Waples, the Ed Hart trained-Roll With Joe made his move from third, sweeping to command ahead of early leader Eighteen (Paul MacDonell) after the :26.2 opening quarter.

At the :55.1 half-mile mark, Betterthancheddar blasted to the top from fourth with Foreclosure N (Sylvain Filion) and Shadyshark Hanover (Tim Tetrick) following that move.

Betterthancheddar reached three-quarters in 1:22.3 and turned for home with Roll With Joe gearing up for a stretch duel from the pocket. Waples sent his charge after the leader and edged away to score the 10-1 upset in 1:49.3, with his final quarter clocked in :26.3. Betterthancheddar finished three-quarters of a length behind in second and Shadyshark Hanover was third.

“I’ve driven horses for Ed before and they’ve always been really nice horses. I didn’t know anything about [Roll With Joe] and he just said that he likes to be up in the mix and it just worked out that way,” said Waples. “I thought I could get around to the front and I kind of figured Brett would be coming with Casie’s horse [Betterthancheddar]. It really worked out well, he swelled right up on Casie’s horse’s back and came off of his back and raced really well. He’s a really nice colt. I’m surprised; I hadn’t really heard all that much about him. Usually you hear about ones like him. He’s really nice -– handy and good gaited and just a nice horse to drive.”

With the cool temperatures and rain earlier in the day, Waples provided some insight on the 1:49.3 winning effort.

“That’s a great mile regardless,” said Waples, “but I thought even just before that race they came out with the water trucks and watered it and made it a little more dead going to the gate there so I kind of thought we were looking at a 1:50 and change mile, 1:51 and change, something like that. To go 1:49.3, I was very impressed.”

Roll With Joe paid $22.60 for the upset. The son of Cams Card Shark-Classic Wish, a full brother to 2001 North America Cup champion Bettors Delight, won two of nine starts at two, including the Champlain Stakes, to earn $157,740. Tonight's victory was his second in a row as a sophomore and boosted his seasonal earnings to $57,500 for owners Blue Chip Bloodstock Inc. of Wallkill, Stephen Demeter of Tarrytown and Not To Worry Stable of New York, New York, and breeder Winbak Farm of Chesapeake City, Maryland.

Roll With Joe has been assessed at odds of 48-1 in the Spring Book.

MacGrath offered an update on the retired pacing sensation.

“[His retirement is going] good. He had a full book his first two years. This year has slowed down a little bit, but that’s typical of the third year,” said MacGrath. “He’s been healthy and strong and bred a great book of mares. We’re extremely happy with him. His in foal rate was great. I haven’t heard anybody say anything bad about any of the colts or fillies he’s had. It’s terrific, he’s at the right place and things are good.”

“They look a lot like him. He had a bit of a course head on him and he’s been bred to some very beautiful mares. They’re coming out with very sharp looking heads and are good sized horses -- colts and fillies. In fact, Bridgette [Jablonsky, Farm Manager] at Hanover was telling me that they have some beautiful fillies and that’s a good thing. I’d like to have a filly.”

It looks like it should be an exciting season for the 3 year old colts this year.

A wise horseman once

A wise horseman once said,"Time only counts when you're in jail". (eg. The losses suffered by Big Jim & Betterthancheddar.)