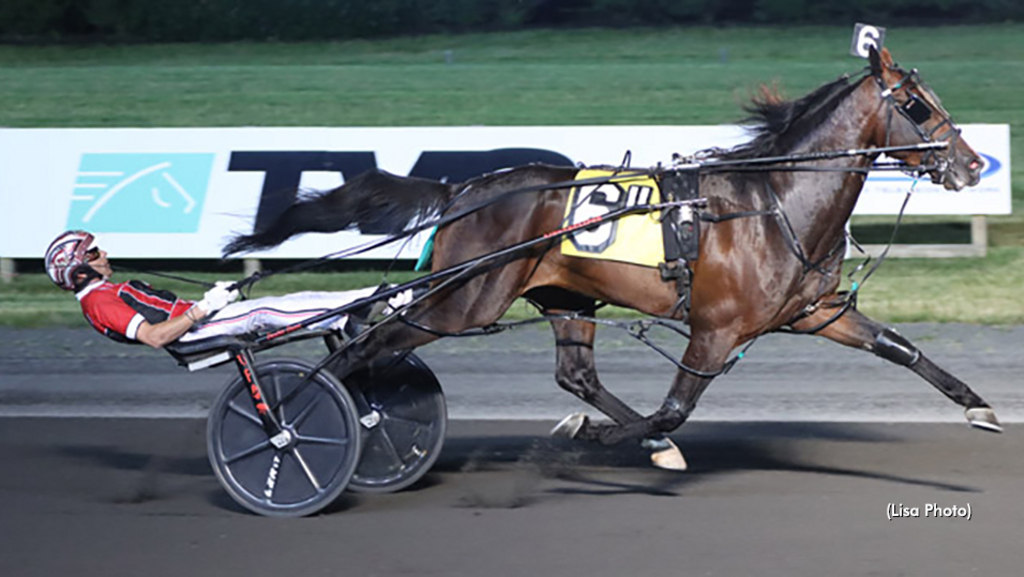 On a sweltering summer Saturday night (June 25) at The Meadowlands, tremendous performances were the norm as six divisions of the third leg of the Graduate Series for four-year-olds were sprinkled throughout a high-powered 14-race program.

Of those performances, one stood out from the rest – at least from a speed perspective – as Bulldog Hanover won the second of two $50,000 splits for open pacers in 1:47, equalling the fastest mile of the year in the sport. Nicholas Beach was the first to do it on May 21.

After traveling down from his home base of Ontario, Bulldog Hanover landed in the Noel Daley barn and the son of Shadow Play-BJs Squall lowered his previous lifetime best by a full second with Dexter Dunn at the controls.

Bulldog Hanover nudged past Linedrive Hanover just after that one hit the quarter in :27 and had little trouble from there, reaching the half in in :55 and three-quarters in 1:22.1 before an incredible final quarter of :24.4 completed the mile. Linedrive Hanover was two lengths back in second with Rockyroad Hanover third.

“I was most surprised by his last quarter,” said Dunn. “It was very impressive. I asked him at the top of the stretch and he set me back in my seat. He’s got a big, powerful stride. It doesn’t even feel like he’s doing what he’s doing.”

But that was just one of the incredible performances on this star-studded night.

Bella Bellini, the 2021 Hambletonian Oaks champion, sat fifth and last to three-quarters before sprinting her final quarter in :25.4 to record a three-quarter-length win over Herculisa in a $40,000 division for trotting mares in a lifetime-best 1:51.

“Last week [when third in the Armbro Flight] she raced great coming from a long way back,” said Dunn. “With only five horses, we went to the back because I believe in her speed, and she showed it. She likes a target.”

The daughter of Bar Hopping-Bella Dolce, who is trained by "Nifty" Norman, returned $2.60 as the 1-5 public choice, and raised her career numbers to 13 wins from 32 starts, good for earnings of just over $1.2 million.

In a thrilling two-horse battle to the wire, Rattle My Cage got past the speedy Cuatro De Julio by a neck in 1:50.3 for driver Yannick Gingras and trainer Ake Svanstedt in the first of two $50,000 splits for open trotters.

Rattle My Cage upped his win streak to three while paying $4.40 to win as the second choice. The son of Love You-Caress The Senses is now seven-for-21 in his career, good for earnings of $163,279.

The biggest upset of the night came in a $40,000 division for mare pacers as defending Horse of the Year Test Of Faith, the 1-9 favourite, came up a head short of taking down speedster Mikala and driver George Brennan.

Mikala, a Nik Drennan student, took the lead at the half and lasted to the line in a lifetime-best 1:48.3 to remain perfect in four seasonal starts. The daughter of Always B Miki-Shes Some Treasure paid $12.80 as the second choice.

Talk about your tough beats. Test Of Faith’s final quarter of :24.3 tied the record for fastest-ever quarter time at The Big M (Mach N Cheese did it first) and it still wasn’t enough.

Ahundreddollarbill surged off cover to win the other $50,000 dash for open trotters in 1:51.1. The gelded son of Chapter Seven-Swinging Royalty, who was driven by Todd McCarthy and trained by Tony Alagna, held off the late-charging Ambassador Hanover by a head while upping his resume to 12 wins from 23 lifetime starts, good for earnings of $808,397. He paid $3.40 as the 3-5 public choice.

In the other $50,000 event for open pacers, Charlie May out-gamed 39-1 longshot Whichwaytothebeach by a neck in a lifetime-best 1:47.1 for driver Dave Miller and trainer Steve Carter.

“I am blown away by that mile,” said owner Don Tiger. “But it was the right trip. He got to sit second and got to pacing in the lane. He loves to chase. Loves the competition. He is eligible to the Roll With Joe [next week at The Meadowlands], but after this 1:47.1 mile, we may keep him out to get his legs back. We will be in the [July 9] Graduate Final.”

A LITTLE MORE: Dunn led the drivers with three winners on the card.  Travis Alexander had a training double.

Jessica Otten’s $50 win and place bet on Charlie May proved to be enough for the Big M TV personality to record her second win in the track’s Battle of the Masterminds handicapping contest. She finished the night with a mythical bankroll of $645.60.

Racing resumes Thursday (June 30) at 6:20 p.m. (EDT), kicking off the first three-program week of the year.

Despite 5 trotting races on the program, I think last night's racecard at The Meadowlands was the first card in history in which 3 horses won in sub-1:48. I also think that Bulldog Hanover's race was the first race in history in which "Hanover" horses placed, first, second, third, and fourth. Jeff, you're the Hollywood Heyden of SC. If you disagree with me, please feel free to post a reply.