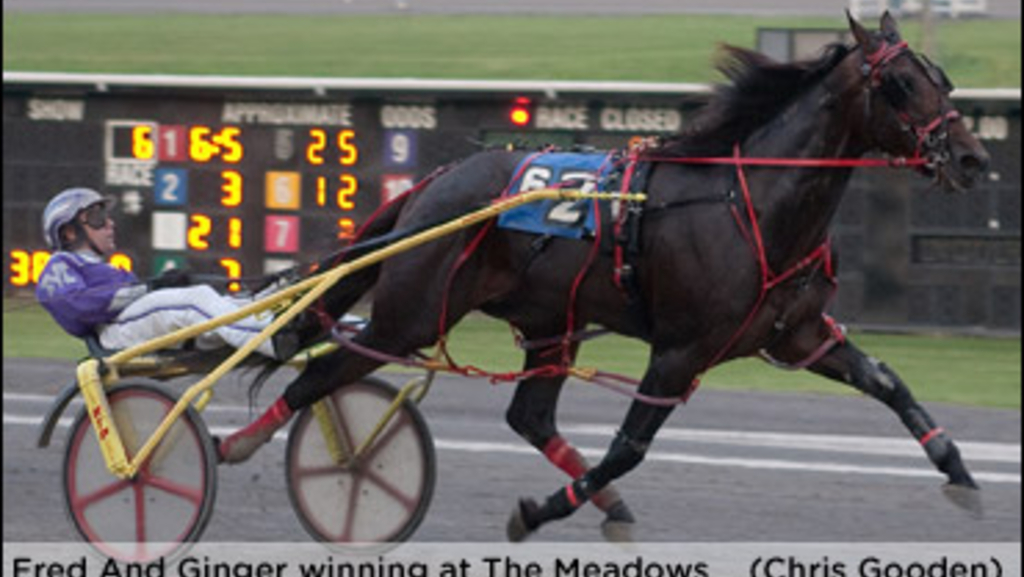 Driven by Dave Palone and trained by Ron Burke, Fred And Ginger stopped the timer in 1:49.4 in winning by a neck over a hard-closing Pang Shui (Jim Morrill Jr.)

“I felt confident and pretty comfortable after the second quarter breather,” said Palone in the winner’s circle following the race. “I really did. My horse is not the best in the turns but certainly was the best in the race.”

Fred And Ginger, a three-year-old Real Artist colt out of Graceful Motion by Beach Towel, now has won three of five starts this season with one second-place finish and one third-place finish. The 2010 Hempt victor is owned by Howard Taylor and Robert Feldman and Edwin Gold, all of Pennsylvania, and Jerry Silva of Long Beach, New York.

“This is a great horse,” said Taylor in the winner’s circle. His sister was a great horse and Dave did a great job for us tonight.”

Following Fred And Ginger were Sharks Legacy (Joe Pavia Jr.), sitting in the pocket throughout the mile with Pang Shui (Jim Morrill Jr.) in the third spot.

Morrill Jr. and Pang Shui put on a late charge up the passing lane (Pocono Pike) to lose by a neck with Sharks Legacy three and three-quarters of a length back of the Hempt winner.

The 1:49.4 bested the old stakes record of Badlands Nitro (Brian Sears) of 1:50 established in May of 2008. This also was a new life mark for Fred And Ginger.

Shadow Play (David Miller) owns the all-time pacing three-year-old colt mark at Mohegan Sun at Pocono Downs with a time of 1:48.2. That mark came in August of 2008 in an Adios elimination race. The Northeastern Pennsylvania track hosted the Adios that year because of on-going construction at the Pittsburgh area plant.

One More Laugh(Tim Tetrick), second-half of an entry with Fred And Ginger, went on two nasty breaks in the race and never threatened.

That was some strange race.

That was some strange race. Tetrick seemed troubled to say the least....