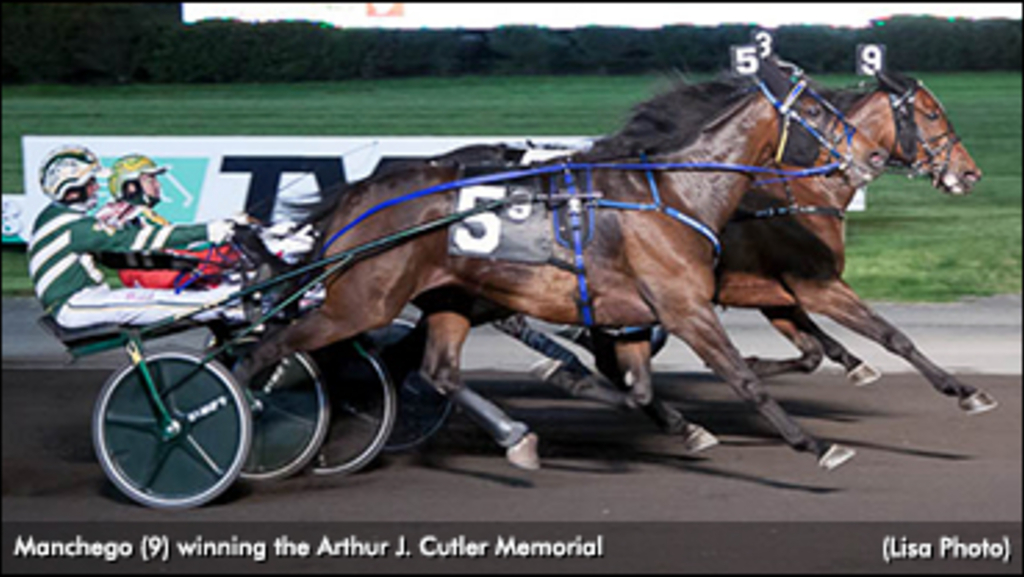 Driver Dexter Dunn employed a methodical first-over grind for the six-year-old mare Manchego and survived late pressure from a game pacesetter and a surging closer to win the $141,250 Arthur J. Cutler Memorial in 1:51.1 on Saturday (May 15) at The Meadowlands.

In her first start of the season, Dunn floated the Nancy Takter trainee into fifth as Guardian Angel As gunned for the lead to a :26.3 opening quarter. Felicityshagwell S, also flaunting early foot but from an outside post, raced parked and pressed forward into the backstretch to take the lead. Manchego meanwhile crept forward on the rim, forcing the hand of Guardian Angel As to circle from the pocket and retake the lead by a :54.4 half.

“Obviously I’ve seen every one of her races, and I was saying to my daughter ‘She’s getting tortured,’” said Barry Guariglia, who owns Manchego through Black Horse Racing. “When she was still head and head at the half, I said ‘If we get a cheque, I kind of think we’re lucky.’ And then I knew the way Dexter was sitting when they were turning for home, I said ‘She’s not done.’ I mean, the words I was using I wouldn’t say on here, but I was totally impressed to say the least.”

“I’m lucky she’s got the turn of foot she’s got,” Dunn said after the race. “She was truly brave tonight.”

The victory for Manchego comes in her first start following her retirement in Nov. 2020 when she won the $320,000 TVG Mare Trot. Her connections, upon considering the mare’s success racing off the lead, decided to shelve their breeding plans for the Muscle Hill mare and bring her back for another year.

“Nancy [Takter] said that he’s really happier on the racetrack than she is in the paddock,” Guariglia said. “And it’s kind of what I said right here – this beats kind of chasing her around a paddock. Obviously, it’s so far so good to say the least.”

GREAT GRADUATES: A pair of divisions for the Graduate Series’ second preliminary sandwiched the evening’s feature.

Speedy fractions paved the way for Poseidon Seelster to scoot through a narrow seam at the pylons and nail pacesetter Warrawee Vital in the opening division of the Graduate.

With a few taps of the whip, driver Tim Tetrick landed 8-5 favourite Warrawee Vital on the point past a :26.2 opening quarter. Tattoo Artist, who hustled off the gate from post 8, yielded for the pocket entering the backstretch while Poseidon Seelster sat third. No Lou Zing, positioned fourth, soon edged uncovered into a :53.4 half and inched closer to the pacesetter circling the final turn.

No Lou Zing’s first-over grind came to a halt as Warrawee Vital remained revved on the lead passing three-quarters in 1:21. Room opened for Tattoo Artist to pop pocket while Poseidon Seelster stuck to the inside, with both making ample gains as the leader grew leg weary. Warrawee Vital gamely fought his late challengers from in between, but Poseidon Seelster snuck a nose in front at the finish of a 1:47.4 mile with Tattoo Artist finishing third. Captain Barbossa, from off the pace, rallied for fourth.

“Going into the race, I was in the room back there and I looked at the program, and I legit just said ‘I don’t know what I was going to do,’” winning driver George Brennan said. “I know he’s got good gate speed, so I figured if I could establish good position, just sit there [and] try to be in on the last turn. The trip couldn’t have worked out any better.”

Ruthless Hanover swept to the lead and held firm to the finish to take the second Graduate division in 1:48.

Sandbetweenmytoes tipped off the pylons again as the field entered the final turn but gained little ground first over as Ruthless Hanover motored to three-quarters in 1:20.4. Allywag Hanover popped pocket straightening for the finish but levelled off as a contingent of closers kicked into action late. Though the quick fractions proved taxing, Ruthless Hanover hit the finish in time as Save Me A Dance split through the competition to finish a fast-closing second while Chief Mate surged at the pylons for third.

“I was trying to be a little nice to him in the first quarter, but I guess he had to pace some kind of middle half to get to the front,” winning driver Andrew McCarthy said after the race. “He’s an incredible horse, really. He kind of just does what he has to – he kind of turns his head, watches the horses on the outside. Just does enough to get the job done.”

BLAZING A TRAIL: One week after equaling Stars Align A’s national-season’s record of 1:48, American History lowered that mark by stopping the clock in 1:47.2 in a high-end conditioned pace as the 1-2 favourite.

“He’s been terrific,” said McCarthy, who was in the sulky behind the Tony Alagna trainee. “He’s starting to find his rhythm now.”

HUGE HANDLE AGAIN: All-source wagering totaled $4,088,468, the fifth time in 2021 that betting has busted the $4-million barrier. It also marked the seventh time this year that weekend action exceeded the $7-million plateau.

A LITTLE MORE: For the third time in the last four race cards, McCarthy registered four wins, giving him 13 victories over that span. The 35-year-old pilot now has 60 wins on the year, good for second in the standings behind Dunn, who has 79.

Even with 3 trotting races on

Even with 3 trotting races on the card, there were 9 races last night that went in sub-1:50. And by virtue of finishing 4th in last night's 2nd race, Caviart Lotus now holds the dubious distinction of having earned over $100,000 in his career without having ever won a single race!