“We believe this bill is an important step and one that will ensure, just as the OLG Slots at Racetracks Program has done in the past, that only communities that support OLG gaming facilities will host them,” said Sue Leslie, President of the Ontario Horse Racing Industry Association.

Both the NDP and PC have spoken in favour of referendums prior to the approval of new gaming facilities, and OHRIA hopes that both parties will unite to push this bill through the legislature prior to the spring recess.

“The Slots at Racetracks Program is a $1.1 billion profit generator for the government of Ontario that was created as a result of wide spread opposition to hosting gaming facilities. The seventeen tracks proved to be willing hosts, in willing communities and the government has reaped the benefit ever since,” said Leslie.

MPP McNaughton’s bill will be voted on at second reading on May 3, 2012 and if passed at that stage referred to committee for further consideration. New Democrats or Liberal MPPs support will be required to pass the bill.

A release from McNaughton's office appears below. 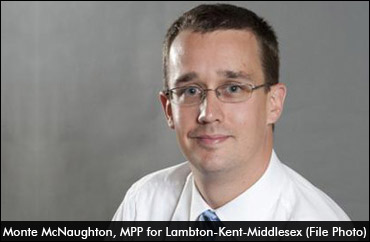 “We have heard from residents throughout Ontario that they would like to have a direct voice as to the potential development of new casinos in their community,” said McNaughton. “This bill legislates a mandatory municipal referendum before any new casino development can occur.”

With recent plans to modernize the OLG announced, it is widely expected that there will be additional casino site development proposed throughout Ontario. Further casino development provides great opportunity but it also raises great debate amongst portions of the population.

“As a former three-term municipal councillor, I believe strongly in working with our municipal and local partners. This bill will ensure that local communities are willing partners and hosts for new casino development.”

“It has long been our Party’s position to ensure local decision making before casinos move forward and we believe that collectively, local communities and residents are best suited to make important decisions on issues like these,” said McNaughton.

Now Dalton is slick, he has

Now Dalton is slick, he has convinced a PC MPP to take a job as the highest paid public servent in the provice and force a bi-election. If Liberals get the seat, guess what, they are back to the majority!

i hope that the referendum

i hope that the referendum options for the people to select are these 3 choices...

2) Yes to casino in downtown

3) Yes to a casino at the racetrack only!