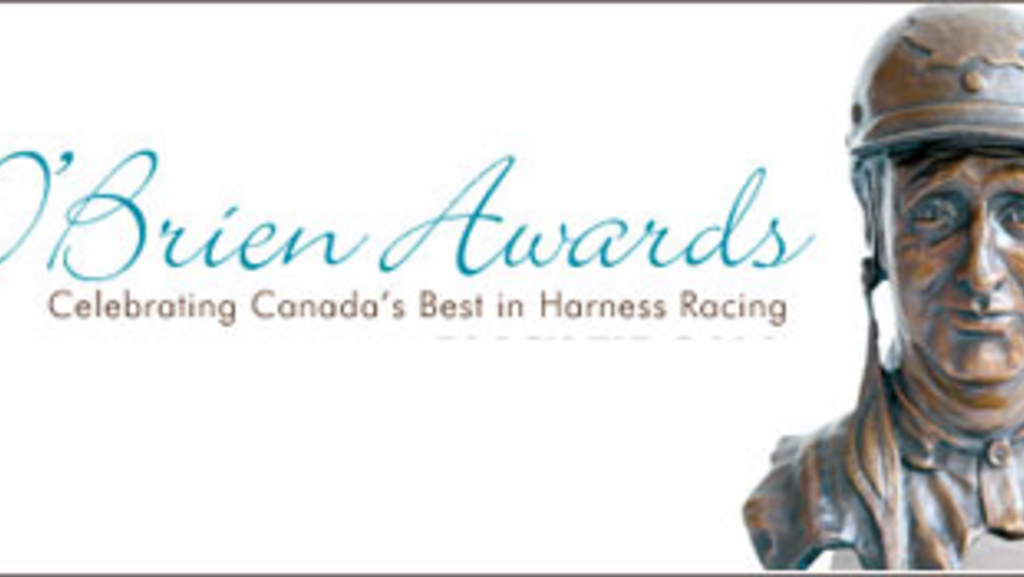 Standardbred Canada today announced the finalists for the 2010 O’Brien Awards, which honour Canada’s best in harness racing over the past season

. The awards are named in honour of the late Joe O’Brien, an outstanding horseman and a member of the Canadian Horse Racing Hall of Fame. The winners will be announced at the annual O’Brien Awards Banquet on Saturday, January 29, 2011.

The 2010 roster of O’Brien finalists includes many past champions, both human and equine along with nominations for a father and son, and a first time nomination for a female in the O’Brien Award of Horsemanship category.

Coleman, 30, of Cambridge, Ontario, is looking to take home her fourth title as Canada’s trainer of the year following another outstanding season. To date, she leads all Canadian trainers in the earnings column with $4.6 million, along with 108 wins. Her North American earnings are in excess of $6.5 million. Three O’Brien nominees are conditioned by Coleman; two-year-old trotting filly Idyllic, two-year-old pacing filly Western Silk and three-year-old pacing colt Sportswriter.

McIntosh, 58, of Windsor, Ontario, has trained 147 winners and horses to earnings in excess of $3.7 million to date which puts him in second in the earnings column for Canadian trainers. McIntosh last won the Trainer of the Year award in 2008. His three-year-old trotting colt Text Me, a horse that McIntosh bred, co-owns and conditions has been named an O’Brien nominee while McIntosh also gets the nod in the Breeder of the Year category, a title he won in 2007.

Rick Zeron, 54, of Oakville, Ontario, and his son, Scott, 21, are both finalists for O’Brien Awards. For the second consecutive year, Rick is nominated for the O’Brien Award of Horsemanship, while Scott is a first time nominee as Canada’s Driver of the Year.

Rick Zeron has been posting solid training and driving numbers for over two decades, and posted some of his highest statistics ever in the 2010 season on the tough Woodbine Entertainment Group circuit. As a driver he’s made 257 trips to the winner’s circle and driven horses to $5.7 million in earnings to date. On the training side, he has 94 wins and $1.7 million in earnings to his credit, which includes contributions from Peach Martini and A Ps Money Maker, both O’Brien nominees.

Finnish born trainer-driver Riina Rekila has earned a nomination in the O’Brien Award of Horsemanship category, the first woman to achieve that honour. She has racked up an impressive portfolio of wins since arriving in Canada less than four years ago and has made a name for herself this past season with the exploits of her star performer, three-year-old trotting filly Random Destiny, who has been nominated for an O’Brien. Rekila owns, trains and drives a string of horses based out of her Campbellville, Ontario farm. In 2010, she’s driven 25 winners and horses to earnings of over $857,000 while training 27 winners and horses to in excess of $900,000 in purse money.

Scott Zeron is en route to a career best season. He currently tops the Canadian driving charts in wins with 592 victories to date and has driven horses to $4.3 million in earnings. One of his most memorable victories on the season was his Gold Cup and Saucer victory with Part Shark at Red Shores Racetrack and Casino at Charlottetown Driving Park. Zeron was recently invited to represent Canada in an international driving competition at Vincennes Racetrack in Paris, where he finished second in a field of 14 of the world’s top reinsman.

Randy Waples is looking to add a third O’Brien trophy to his repertoire as Canada’s Driver of the Year. Waples was honoured in 1998 and 2001. This season, he has won 318 races and driven horses to earnings of over $7.8 million. He was the regular driver for top stakes performers and O’Brien nominees, San Pail, Dreamfair Eternal and Text Me.

A number of horses are looking to add to their owners’ trophy collections, having won O’Brien accolades in previous years. San Pail, Dreamfair Eternal, and Sportswriter are all past O’Brien Award winners.

Two fillies that exemplified consistency throughout their freshman campaigns are nominated in the two-year-old pacing filly division. Idyllic, a winner of eight of nine races and over $805,000 took a mark of 1:51 in her final start of the season, the Three Diamonds. She is up against Modern Connection, a winner of over $456,000 who posted 10 top three finishes in 13 starts including a perfect five for five record in Ontario Sires Stakes events.

Big Jim and Mystician, North America’s leading money winning two-year-old pacing colts are O’Brien Award finalists for their division. Big Jim won six of 10 races and over $834,000, including the final of the Dream Maker, the Nassageweya, a Metro Pace elim, Champlain, Breeders Crown and finished the season strong with a 1:49.1 season’s best in the Governor’s Cup at Woodbine. Mystician had nine top two finishes from 12 races and earned over $808,000 while cashing in on the lucrative Metro Final and three of six Ontario Sires Stakes events.

A pair of millionaire fillies will compete for divisional honours in the three-year-old pacing filly category. Put On A Show won 12 of 16 races including the Breeders Crown, and netted over $1.1 million in purse money while Western Silk won 11 of 15 for $1.1 million in purses with numerous stakes, including the Jugette, six Ontario Sires Stakes events, the SBOA Stakes and the Fan Hanover to her credit.

North America’s top two money winning three-year-old pacing colts are nominated for an O’Brien Award. Rock N Roll Heaven won 16 of 21 races and banked $2.1 million during a stellar sophomore campaign. From Aug. 22 through Nov. 28, he reeled off a 10 race win streak, cashing in on victories in the Little Brown Jug, the Breeders Crown, Tattersalls, Messenger and Matron in the process.

Sportswriter’s three-year-old season was an abbreviated one, as the son of Artsplace was retired due to a training injury following the Meadowlands Pace. Before sustaining that career ending injury he was able to capitalize on his talent by winning the 2010 edition of Canada’s richest harness race, the $1.5 million North America Cup in a career best 1:48.3 and ending his season with $774,000 in earnings.

Dreamfair Eternal is back to defend her title as Canada’s Older Pacing Mare of the Year. In 2010, the homebred daughter of Camluck won 16 of 22 starts and over $942,000 for John and Mary Lamers of Ingersoll, Ontario. She racked up wins in the Masters, an elim of the Roses Are Red, elim and final of the Milton, the Breeders Crown and Forest City Pace elim and final. A Ps Money Maker, the other nominee is a winner of six races and over $273,000.

Bigtime Ball is looking to repeat in the Older Pacing Horse category following his O’Brien trophy for his 2009 efforts. He enjoyed a very productive season that included 14 of 18 top two-finishes and a bankroll of over $283,000 for owner-trainer-breeder Gord Irwin of Cobourg. Bigtime Ball won the Masters Final at Georgian and was second in an elim of The Canadian Pacing Derby. The winner of the Derby, Won The West, is the other finalist in this category. The six-year-old son of Western Hanover hit for 18 of 19 top three finishes for $1.3 million in purse earnings. He swept the Molson Pace at Western Fair and also scored a victory in the Breeders Crown.

Crys Dream was almost perfect in her juvenile campaign, winning seven of eight races and almost $600,000 in earnings, which included victories in the Peaceful Way and Goldsmith Maid. She is a finalist in the two-year-old- trotting filly category along with Peach Martini, a winner of five races, all Ontario Sires Stakes, and almost $296,000.

The nominees in the three-year-old trotting filly division are Random Destiny and Ultimate Cameron. Random Destiny won $490,000 and six races, including the SBOA Stakes and OSS Super Final. She finished the season strong with four straight wins, highlighted by her Super Final win, her last start on the year. Ultimate Cameron won five races, $585,000 and scored victories in a division of the Casual Breeze, elim and final of the Elegantimage along with a win in an elim of the Breeders Crown.

Break The Bank K and Text Me are nominated in the three-year-old trotting colt category. Break The Bank K won five races and over $785,000 in a profitable season that included wins in the Simcoe, an elimination of the Canadian Trotting Classic, a division of the Bluegrass and the Breeders Crown. Text Me dominated his competition in Ontario Sires Stakes action, winning six events including the season ending OSS Super Final to give him $554,727 on the year and nine wins.

The finalists in the Older Trotting Mare category are Kandor Hanover and Windsong Soprano. Kandor Hanover raced primarily in the upper conditioned ranks, scoring nine wins and $163,140 on the season while taking a mark of 1:53.4 at Mohawk. Windsong Soprano won four races and netted $263,485 on the year and was runner up in a number of stakes engagements including the Armbro Flight Final and the Conway Hall.

The Armstrong Breeder of the Year Award nominees are Robert McIntosh, of Windsor, ON and Reve Avec Moi Dreamwithme from Knowlton, QE. Horses bred by Reve Avec Moi won 46 races and earnings of almost $1.5 million for an average of $93,622 per starter in 2010. O’Brien nominee Crys Dream, along with Easy Dream, Kirty Dream, Intense America and Fortunes Dream, were all $100,000 plus winners bred by Reve Avec Moi.

McIntosh is looking to take home his second Armstrong Breeder of the Year Award. Some of the 2010 star performers bred by McIntosh and contributing to his 281 wins and $3.5 million in earnings as a breeder include O’Brien finalist Text Me, Strike An Attitude, Stonebridge On Ice, Day To Ponder and Good Bad Lucky. Horses bred by McIntosh averaged $32,360 in 2010 earnings.

One of the 24 horse nominees will be recognized as Canada’s Horse of the Year. The winners will be announced at the O’Brien Awards banquet on Saturday, January 29, 2011, at the Delta Meadowvale Hotel in Mississauga, Ontario.

Many ommissions and many

Many ommissions and many questionable nominations

I am very, very surprised

I am very, very surprised that Mark Macdonald is not up for an O'Brian award as canada's top driver. He not only won the NA CUP but won many other major stake races combined with the fact that he is the leading money winner on the weg circuit which is the
the toughest and top circuit in canada. The people who are responsible for the nominations need to wake up. This is not meant to take anything away from the two who were nominated, Randy is a top money winning driver and Scott is a young driver with a very. very bright future in the sport but to not have Mark up for this award does not seem right to me.