On Thursday, October 12, Puslinch Firefighters were dispatched to a ‘public assistance’ call for a horse stuck in a horse trailer at roughly 9:30 a.m.

Ten Firefighters were in attendance for the nearby horse farm on Wellington Road 34 in Puslinch Township. The crew responded quickly and was at the scene within seven minutes from the initial pager activation.

A 14-year-old mare named ‘Heidi’ was trapped halfway through the side door of the trailer and could not move forward or backwards. The owners and bystanders assisted in keeping the horse calm and relaxed while fire personnel quickly derived a plan of action to free the trapped horse.

It was determined that the best and safest option was to use hydraulic spreaders above the horse to spread the opening apart. It was quickly determined other hydraulic devices and cutting options were out of question due to safety and noise that could further hinder the stuck mare. Dealing with a matter of inches, Heidi was quickly and successfully freed. Miraculously, she sustained zero damage or injury throughout the entire event – not even so much as a cut or scratch. The horse trailer also sustained minimal damage. The entire process from arrival on scene to complete extrication of the horse took a total of 13 minutes.

Among the firefighters who responded, three of them had recently attended the Technical Large Animal Emergency Rescue (TLAER) course only eight days earlier, organized by Equine Guelph, University of Guelph through Susan Raymond, PhD. Communications & Programs Officer. The TLAER course, instructed by Dr. Rebecca Gimenez (TLAER Inc.) was conducted over two days (October 3 and 4) at Grand River Raceway in Elora, Ont. The course was very informative and covered both in-class sessions and practical scenarios on both artificial and live animals.

"Utilizing the information from this course proved valuable both in maintaining personal safety zones around the animal and scene while coming up with an effective plan to quickly and safely extricate the large animal," said firefighter Michael Dailous.

The incident was the second horse rescue call for the month of October – both calls came only days after several firefighters in attendance had taken the TLAER course. 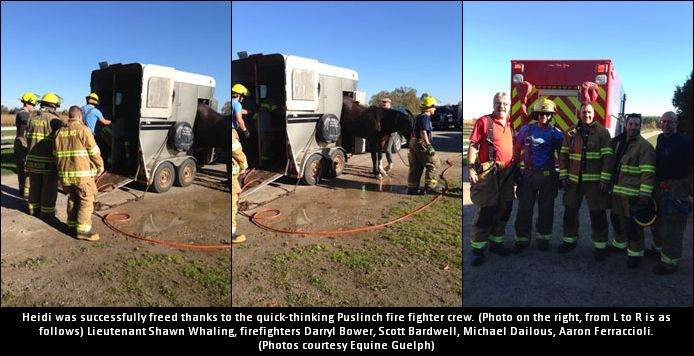 Good work guys. It is great

Good work guys. It is great to know that the fire department is there to help in equine situations like that.