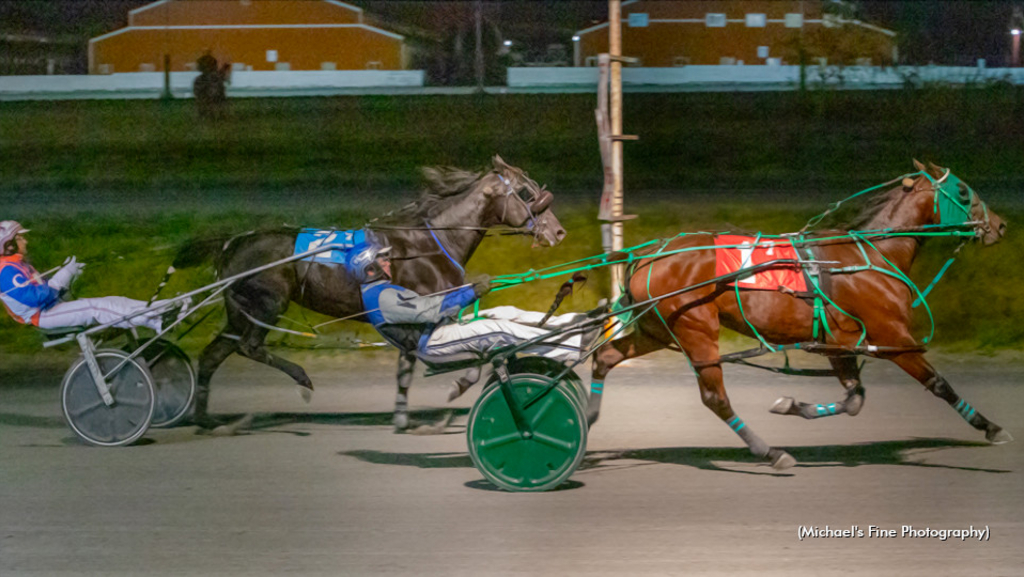 Trainer Chris Lancaster enjoyed a memorable Monday at Fraser Downs thanks to a trio of trips to victory lane on the 11-race card.

He nabbed his first win of the evening with The Final Rose (1:54.4) in a $7,000 overnight event for filly and mare pacers, but his next two wins came with higher profile performers.

Outlaw What If CC pulled off a 22-1 upset in her $15,000 division of the Mary Murphy for Lancaster and driver Scott Knight.

The three-year-old daughter of Mystery Chase-Billie J Blue Chip turned a two-hole trip into the 1:54.1 decision over heavily-favoured Shoot The Whiskey, who carved out fractions of :28.2, :57.1 and 1:25.3 before getting hauled down late.  Third prize went to Angelsonthehorizon.

shares ownership on the pacer with Velda Olding of .  The win was her second of the season from 14 attempts and it pushed her lifetime earnings to $13,869.

Lancaster and Knight also teamed up to triumph with Miss Itunes in the $10,000 Fillies & Mares Open Pace.

The five-year-old daughter of Mystery Chase-Minettas Munchkin was parked out through fractions of :26.2, :54.1 and 1:22.1 before using a :29.3 closing quarter to win in 1:51.4 over In High Cotton.  Century Mach finished third.  The clocking equalled the track record for older pacing mares.  She joins Cays Blessing and Paperback Thriller as the fastest distaffers to win over the oval.

Gotta Wear Shades captured the other $15,000 division of the Mary Murphy for three-year-old pacing fillies.

Trainer/driver John Vukelich got away second with the daughter of Custard The Dragon-Shes Shiny while Play Misty For Me powered to the top and carved out first-half fractions of :28.3 and :58.3.  Gotta Wear Shades went on the attack in the third quarter and she took command while racing parked past the three-quarter pole in 1:27.1.  She kicked home in :29 to win by 6-1/4 lengths over Play Misty For Me in 1:56.1.  Forever Furley was third.

Vukelich shares ownership on the filly with Edwin Lougheed of New Westminister, B.C.  The partners watched her improve her 2022 record to 7-3-5 from 26 starts with the victory.  The $7,500 payday lifted her lifetime earnings to $46,024.

A set of Robert Murphy Memorial divisions also went postward on Monday evening with Joe Rich taking home top honours in his assignment in a time of 1:53.2.

Brandon Campbell put the Jim Marino trainee on the lead early and together they sliced out fractions of :28.3 and :58 before coming under heavy pressure in the third quarter by Jimmyachance.  That foe showed a short lead while racing parked past the three-quarter pole in 1:25.1, but Joe Rich battled back and used a :28.1 closing frame to win by 4-1/4 lengths over Jimmyachance in 1:53.2.  Chuck You Farlie was third.

Itll Be Fine took the other division in 1:53.1 for trainer/driver Richard Lancaster.

The son of Hes Watching-Modern Hanover sat a pocket trip behind race favourite Lets Tie One On.  That foe whacked out splits of :28.4, :57.1 and 1:24.4 before giving way to Itll Be Fine in the final quarter of the contest.  After suffering interference past the three-quarter pole, Itll Be Fine jetted home in :28.1 to win by 5-1/2 lengths over Lets Tie One On in 1:53.1.  Oh Shut Up was third.

shares ownership on the seven-time winner with Ray Soh and Leslie Goldlien.  The $7,500 payday lifted the pacer’s career bankroll to $69,144.