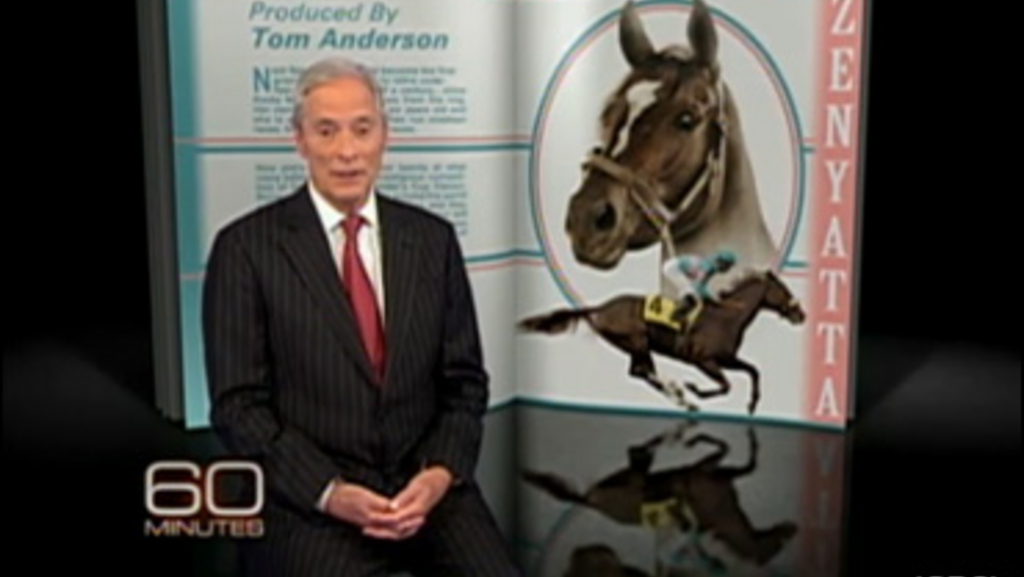 On Saturday, undefeated thoroughbred sensation will make her final start in the $5 million Breeders Cup Classic, and the speculation over whether Zenyatta is the greatest of all-time has reached one of television's most famous news programs

"I think she could arguably go down as one of the greatest, if not the greatest horse of all time," said Smith.

"Well, if we can pull it off, she's never been beaten. So how can you argue with perfection, you know?" Smith replied.

To read the interview, click here. To watch the 60 Minutes episode, click on the video below. A behind-the-scenes look at the interview is also available below.

Sorry, I don't mean to

Sorry, I don't mean to offend anyone, but I won't feel guilty about having a passion for the standardbred breed and won't follow the beat of that drummer wearing the rose-coloured glasses. It's time we stopped having this inferiority complex with regards to thoroughbreds.

Mr. Schott and Mr. carter obviously love the sport and are only expressing their honest feelings.I have nothing against other breeds, and am as much a fan of Zenyatta as anybody, but when we showcase thoroughbreds on this site, and then add insult to injury by suggesting that one of theirs is greater than any horse in our breed, via poll, we are saying simply that they must be better than us. And judging by the results, that is one very big complex.

Think it was a great idea to

Think it was a great idea to post something about Zenyatta here.
I am a horse racing fan - I love watching both breeds though harness racing seems to have the most of my attention. She's a great story to share. Why does it have to be about the different breeds -- why not look at this as something positive for all of horse racing.
She's sweet perfection who has amazing personality who plays for the crowd -- she loves her fans just like one of my all time favourites - the Admiral.

Take a good news story for what it is and stop trying to pooh-pooh everything.

It won't translate to an

It won't translate to an improved handle. Mr Carter and Mr. Sindori have it exactly right!!

I don't want to get this

I don't want to get this thread away from the purpose that it was meant for but to answer Mr. Sindori's question as to why i am still around i will answer it. Simply put i love horse racing, with harness being my sport of choice. I only watch the runners on there big days like the derby or breeders cup. I still watch all the big harness races but never watch an overnight card anymore.

Even though i will probably never bet another race the rest of my life i will always have an interest in the sport. I was a large, large player for many years but a little over 2 years ago i walked away from the game and said i would never return unless the game got competitive with other forms of gambling. If the race game dropped the takeout to a maximum of 10% in all pools and found a way to get racing back to the levels at the big m and weg that it was at 5 to 10 years ago i would be back playing the races the following day.

The sport cannot survive unless it has several marquee tracks with high end claimers and high end conditioned horses and full competitive fields and these tracks have to have a million plus nightly handle to keep big players interested. How i long for the good old days but with a fair and competitive take out rate. How ever i have accepted the fact that this is very, very unlikely to happen and i will probably never again play another race. I like playing sports and poker but harness racing would be my game of choice if the conditions were right for it.

You're absolutely right. All the railbirds are flocking away from horseracing it seems,
I myself bet the races at a much lower average per day than I used to, but I stick around only because I am a loyal patron and hopeless optomist; hoping, lobbying and encouraging change.I know how deep the problems are(only the horsepeople seem oblivious).

I just recently visited Vegas and won two poker tournaments,so you don't have to preach to me. Hope to see you in a tournament somewhere, sometime.I'll bet you play the percentages really well. I will not go "all in" on harness racing any more, but I will follow it ardently as one of those silly "fans", while you more realistically desert us completely.

Just one question...If you are so long gone, why are you still checking out this site? You can bluff all you want, but I suapect that you still care a little. Keep up your interest, I'm not giving up on you.

Sorry to have to disagree

Sorry to have to disagree with you Mr. Sindori, but the truth of the matter is standardbred canada putting this story here will not make one bit of difference in the long run. People are not flocking to bet the thoroughbreds. Like harness racing, thoroughbred racing is also dying out. People like me and thousands upon thousands of others are moving away from the race game wether it be harness or the runners to play games that have a much fairer house take such as sports or poker. Thirty years from now only a select few will know who or what a zenyatta or a somebeachsomewhere was. On the race games current course it will be all but dead by then.

I absolutely adore Zenyatta's story,and have been following her progress religiously;I must first say that, BUT......................
I have a duty to defend Allan, who seems to me to be a bona fide fellow die-hard, hard-core harness racing fan like me, who goes to the races nearly every day and has to defend trotters and pacers from the deluge of insults from the Grasshopper lovers.

So you've got a bunch of hits to see Zenyatta on this site. Do you really think that this will translate to a sudden flocking of people to care about harness racing? Dream on! I for one think that it will have the absolute opposite effect. This is the same as the thinking behind bringing the slots to the track. The slots will take away more people from the races than will participate.

The hubris of the thoroughbred industry only continues to grow, and we are spreading fertilizer like this to help it flourish. In the last few years I have seen an exodus of standardbred punters turn their noses up on our breed and follow the thoroughbreds INSTEAD.

There's plenty of other places on the net featuring The Dancing Queen, and it is one of the most googled names, so of course they'll check it out on this site. Then they will say something like, "Oh, it's those second rate buggy horses." and proptly abandon the space, never to visit again (unless, of course, you continue to feature stories about how wonderful the competition is).So keep it up Standardbred Canada, because you are losing even the most ardent backers.

Sorry for the sour dose of reality, but the medicine needs to be bitter. And Allan, don't be discouraged; your heart is in the right place.

In reply to Well alot of good horses on by mike1967

This superhorse Called Zenyatta rates right up there with the best of all breeds. On the one video there was a comment that she stopped and acknowledged the camera . I have followed horses my whole life and i will never forget Somebeach at Mohawk one night i think it was after the metro Paul took him down to the end of the grandstand before turning him around to go back to the winner circle . This superhorse walked all the way back to the winers circle as proud as a peacock. The fans where 6or7 deep and cheering loudly and this horse put on a show for everybody . I spent a bit of time in superhorse Cam fellas shedrow this horse had personality. To me there is lots of great horses but superhorses have personalities that set them apart . To me we as a industry should promote personalities of horses and horsemen more .

Well alot of good horses on

Well alot of good horses on both sides standardbred sensation somebeachsomewhere / on the thoroughbred side, they have horses like Zenyatta, Smarty Jones was my favorite/ but I think in recent yrs I agree that the thoroughbreds do not mention standardbreds as much as standardbreds advertises thoroughbreds. Either way these horses are a rarity and are great to see / horsepeople must stop bickering regardless of the breed / the horse business already has enough negative distractions keeping the bettors away and let's face it - without the bettors there's not much of an industry on either side.

In reply to Allan, You have to be by poconob

I agree all breeds should

I agree all breeds should work together to improve horse racing's reputation. My problem is why does it seem to be one way. Can anyone tell me the last time a positive standardbred story was in a thoroughbred publication?

Allan, You have to be

Allan,
You have to be kidding!!! All the press reports is the negitive about all of horse racing. ANY kind of positive is a plus. I am really tired of the seperation on the different breeds. Horse racing as a sport and business needs to work together to reverse the public image of this industry. Otherwise, we may be talking to our kids about how there used to be this sport called horse racing....

Hey Allan...in the past 16 hours almost 2,100 people have clicked on to read this piece and watch the video. I guess that many people on here just love horse racing. Harness racing may come first and foremost but a strong horse racing industry benefits us all, and therefore the Zenyatta piece on 60 Minutes can only be viewed as a positive thing.

I wonder if the thoroughbred

I wonder if the thoroughbred people talked about Somebeachsomewhere as much as we talk about their stars? My guess is no. I still don't understand why a Standardbred registry talks about thoroughbreds.