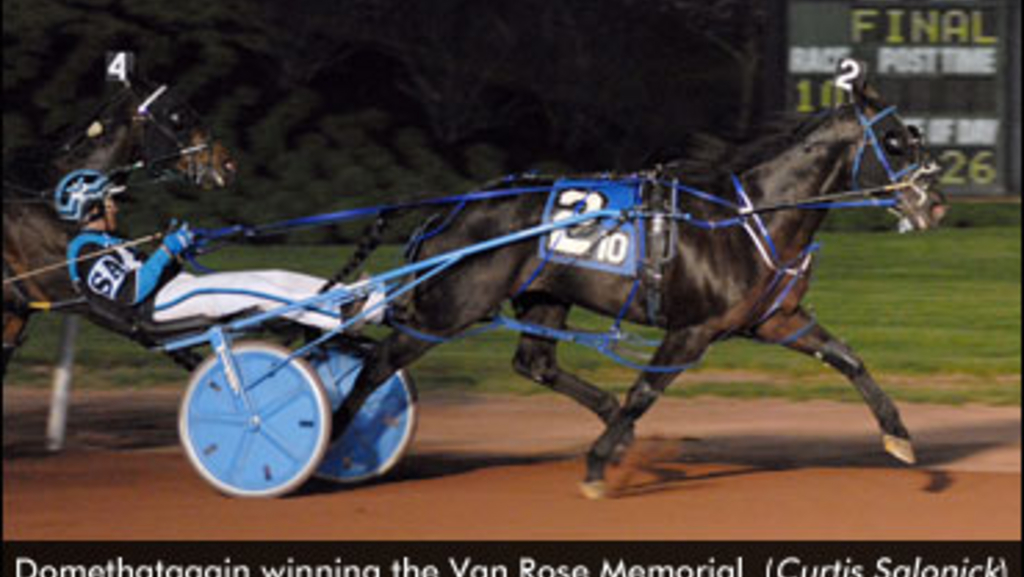 Kentucky Derby Day meant a double-header of harness racing at The Downs at Mohegan Sun Pocono, with the $50,000 Van Rose Memorial Invitational Pace on the evening card taken by the hot Domethatagain in 1:49.

Whom Shall I Fear and Cruzado Dela Noche both notched 1:55 triumphs among four divisions of a $128,000 Pennsylvania All-Stars event for sophomore trotting colts in the early card’s headliner.
.
Two-hole tactics took Domethatagain, a son of Bettors Delight, to victory in the richest race of the year to date, the $529,000 Levy Final at Yonkers Raceway last Saturday, and tonight Domethatagain also parlayed sitting the golden chair to victory in the Van Rose Memorial.

Bandolito left strongly from the rail and Domethatagain went out quickly just to his right, discouraging outside leavers from engaging in a brutal fight. Driver Simon Allard sat right on the back of the pacesetter with the winner through splits of :26.1, :55, and 1:21.3. Allard guided the winner into the famed Pocono Pike passing lane, quickly overtook the leader, and then held off the late bursts of two horses shipping in from Mohawk Racetrack, Alexas Jackpot and O'Brien Award winner Modern Legend, who completed the board spots.

Simon Allard and his brother, trainer Rene Allard, have been next to lethal at Pocono, especially on Saturdays, and tonight proved no exception. The lifetime bankroll of Domethatagain climbed over $850,000 for Allard Racing Inc., Robert Hamather, and Bruce Soulsby.

In the afternoon quartet of trotting features:

Whom Shall I Fear, the full brother to Father Patrick and Pastor Stephen, had to work harder than his brothers usually did in their victories over the last few years, but the son of Cantab Hall kept on grinding steadily to edge pocket-sitting Wicker Hanover by a neck in 1:55. The 1-20 favourite kept his seasonal record perfect in three starts. If you read “Pastor Stephen” and “Father Patrick,” you know trainer Jimmy Takter can’t be far behind, with Corey Callahan handling sulky duties for the Whom Shall I Fear Stable.

Cruzado Dela Noche, a 1:53.4 Grand circuit winner at Lexington last year, was impressive in his seasonal debut, matching that 1:55 clocking by rallying from nine lengths back at the half to catch front-stepping favourite Suit And Tie by one and a quarter lengths. Keeping it “all in the training family,” Nancy Johansson, daughter of Jimmy Takter (and trainer of reigning Horse of the Year JK Shesalady), conditions Cruzado Dela Noche, and husband Marcus Johansson was in the sulky behind the son of Muscle Massive for Courant AB.

Another native of Sweden, Åke Svanstedt, was in Victory Lane in a third cut after the Andover Hall colt Real DJ Hanover played “pocket rocket” in overhauling pacesetter Piercewave Hanover by a head. The 1:56.1 clocking, in his 2015 debut, was a lifetime mark for the winner, who is trained and was driven by Svanstedt, also co-owner with Torbjorn Swahn.

The fourth division was won by Pocono’s “Trot Man,” diamond-gaited driving specialist Mike Simons, and the Yankee Glide colt Boots N Chains, rallying from the two-hole after leaving from outside post seven to catch pacesetting Jacksons Minion by a neck in 1:55.1. Trainer John Butenschoen had his charge sharp for his first start of the campaign while winning for William Wiswell, Jean Goehlen, and Eugene Schick.

(With files from PHHA / Pocono)