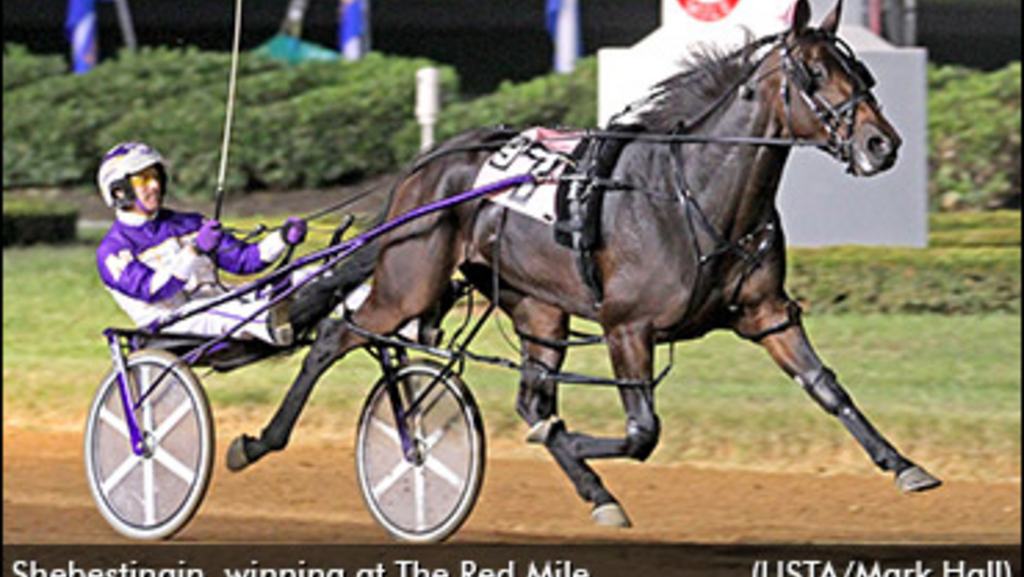 “Last year’s three-year-old filly crop was very good, I thought the depth in that division was pretty good, so you’ve got some good ones coming into the division. I don’t think I would trade either one of mine."

Trainer Joe Holloway hopes to have a good time racing four-year-old female pacers Shebestingin and Somwherovrarainbow this season and thinks both mares could have strong campaigns as they make the jump to facing older foes.

Shebestingin, who last year set the record for the fastest mile ever by a female pacer when she won in 1:47 at Lexington’s Red Mile, likely is two weeks from qualifying. Somwherovrarainbow, who joined Holloway’s stable at the end of last year, makes her seasonal debut Friday night in the B1/A2 handicap for fillies and mares at Meadowlands Racetrack.

Somwherovrarainbow is the 5-2 second choice on the morning line, starting from post six with driver Tim Tetrick. Six-year-old Monkey On My Wheel, a former O'Brien Award winner who won a Breeders Crown at age three and has earned $1.34 million lifetime, is the 2-1 favourite from post seven, with driver David Miller at the lines for trainer Andrew Harris.

Friday’s card at the Meadowlands also includes two opening-round divisions of the Horse & Groom Series for trotters and the second leg of the Winter Survivor Series for pacers.

“We’ll see how it plays out, but I think they’ll both compete very good as four-year-olds against the aged mares,” Holloway said about Shebestingin and Somwherovrarainbow. “Right now, 'Sting' couldn’t train back any better. I think 'Rainbow' could have a really good year; I’m excited about her. But I’m very excited about 'Sting.'”

Somwherovrarainbow’s start Friday is a prep for the upcoming Blue Chip Matchmaker Series at Yonkers Raceway. Among the mares eligible to the Matchmaker, which begins March 21, are three-time defending O'Brien and Dan Patch Award winner Anndrovette and last year’s series champion Feeling You.

A daughter of two Horse of the Year winners – stallion Somebeachsomewhere and mare Rainbow Blue – Somwherovrarainbow was the 2012 Dan Patch Award winner for best two-year-old filly pacer. Last year, she won five of 14 races and earned $359,103, pushing her career totals to 12 victories and $881,540.

Bred by trainer George Teague Jr. and K&R Racing, she was owned most of last year by Teague, K&R Racing and Ted Gewertz. As of November, she has been owned by Gewertz and Diamond Creek Racing. She made one start for Holloway last season, finishing third in the $167,500 Nadia Lobell at the Meadowlands on Nov. 30. The race was won by Shebestingin.

Somwherovrarainbow won two qualifiers last month at the Big M; the first in 1:55.2 and the second in 1:53.3, both with Brian Sears in the sulky.

“Obviously she was a good horse before,” Holloway said. “I think she’s considerably better than she was at the end of last year. She’s put on weight and doing well. She qualified well; Brian was happy with her.”

Holloway plans to start Shebestingin in several overnight races before heading to the $50,000 Miami Valley Distaff on May 4 at Ohio’s new Miami Valley Raceway. Her first major stakes appearance should come in the Roses Are Red in June at Mohawk Racetrack.

“Even though I don’t have the Matchmaker for her, you really can’t just sit around until June; you’ve got to be tight,” Holloway said. “I never took Rainbow out of training because I thought she needed to put on weight and muscle. So we did two different types of [programs] bringing them back.”

Holloway, who trained 1996 O'Brien and Dan Patch Award winning older female pacer Shes A Great Lady, expects this year’s group of four-year-olds to make the mare division even tougher in 2014. Shebestingin and Somwherovrarainbow ranked No. 2 and No. 4 in earnings among three-year-old filly pacers last year; division champion I Luv The Nitelife and Charisma Hanover were first and third, respectively.

“With the mares, you might as well race them; you can only have one [foal] with them. And at least now they can make more money. Back when I raced Shes A Great Lady you could win everything and make like $300,000. It’s better than it used to be that way.”