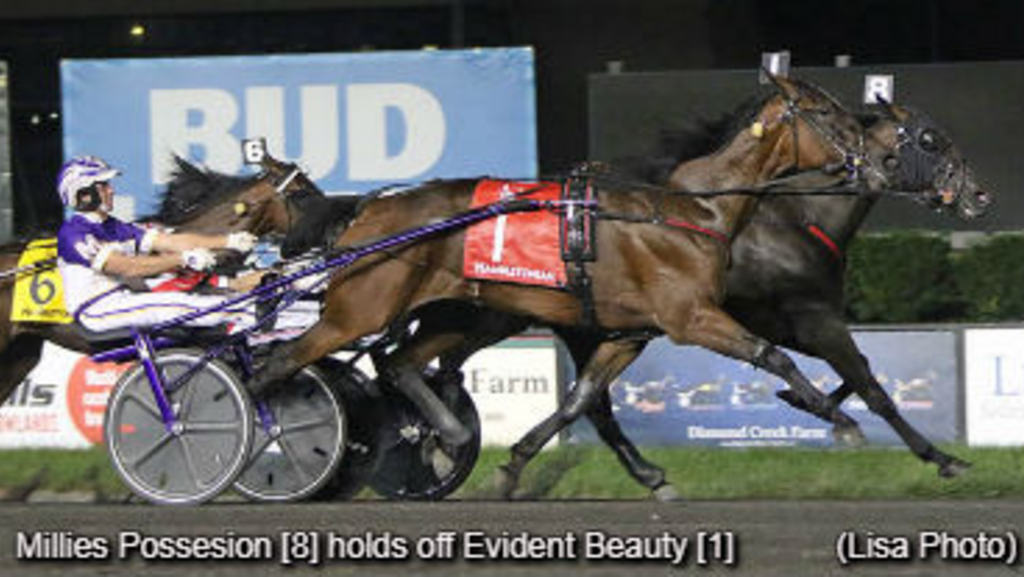 A set of Hambletonian Oaks eliminations for three-year-old trotting fillies highlighted the Saturday evening program at The Meadowlands, with the top five finishers from each tilt earning a berth to next Saturday’s rich final.

The undefeated Millies Possesion staved off a hard-charging Evident Beauty to win the $50,000 first elimination in 1:52.3.

Sonnet Grace grabbed the early lead and chopped out the first quarter in :28 before Dexter Dunn hustled Millies Possesion to the lead in the backstretch. She sailed through sensible, middle panels of :56 and 1:25.2 before using a :27.1 closing quarter to win by a nose over Evident Beauty. Founding out the top five finishers were Queen Of Trixs, Asiago and Sonnet Grace.

Jim Campbell trains the daughter of Possess The Will-Fashion Athena for owner/breeder Fashion Farms LLC of New Hope, PA. It’s now eight wins in as many tries for the career winner of $195,517.

Southwind Casha shot to the top from Post 6 and had the field chasing her to the quarter pole in :26.4. When Dovescry motored up on the rim for driver Simon Allard and muscled her way to the lead. Once she cleared she went sailing through middle panels of :56 and 1:24.2 before using a :27.1 closing quarter to defeat Southwind Casha, Princess Deo, Miss Trixton and Sweet Chapter.

The daughter of Muscle Hill-Cedar Dove, who hangs her harness bag in the barn of trainer Rene Allard, won for the first time this season and for the sixth time in her career. Go Fast Stable, Yves Sarrazin, Kapildeo Singh and Lawrence Dumain share ownership on the career winner of $326,250.

Dont Letem overcame Post 10 in a 12-horse field to win the $81,200 W.N. Reynolds Memorial for the duo of driver Yannick Gingras and trainer Nancy Johansson.

On the heels of a fifth place finish in the rich William R. Haughton Memorial Final on July 13, Highalator was much the best in Saturday’s $60,000 final of the Golden Receiver.

Richard Still got away second with the Jenny Bier-trained speedball, who watched Western Joe hustled the field past the quarter pole in :26.2. Highalator popped out of the pocket in the backstretch and easily brushed to the lead. He threw down middle splits of :54.3 and 1:22 before scooting home in :26 to defeat Sweet Rock in 1:48.

It was the 10th win of the season from 20 starts for the five-year-old son of Somebeachsomewhere-Higher And Higher. Sent off as the 1-2 favourite, the 31-time winner pushed his lifetime earnings to $516,197 for the partnership of Jenny Bier, Joann Dombeck and Midsize Construction Inc.