Ninth Life of One Cool Cat

Primetime Bobcat had hung up his harness and settled into retirement. But the settling bit, it seems, didn’t go so well. The Bobcat was restless, antsy. Enter the Ontario Standardbred Adoption Society, who gave this gelding (and one very lucky lady) a new lease on a life well lived. 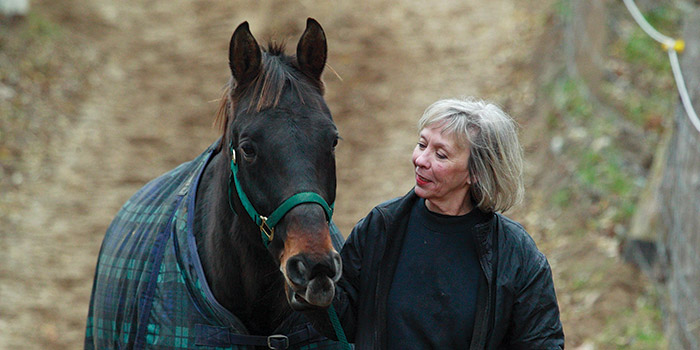 The Ontario Standardbred Adoption Society finds new homes and careers for dozens of retired standardbreds each year. But rarely does a horse with a resume like Primetime Bobcat’s saunter through its doors.

There are some standardbreds who never achieve any significant measure of success at the racetrack – but that doesn’t mean they don’t have the potential to become loving companions, and to excel in another discipline -- perhaps as riding mounts or pleasure driving ­horses. In the eyes of the Ontario Standardbred Adoption Society (and organizations like it across North America), all are worthy.

Still, it seems extra special when a horse like Primetime Bobcat arrives to add a little star power.

The Bobcat, of course, needs little introduction to Ontario racing fans. The now 13-year-old bay son of Abercrombie, out of the Most Happy Fella mare Emerald Girl (who also produced the useful racehorses Lofty Bruce, a $357,000 earner, as well as Armbro Jemstone and Armbro Lapidary, who made $173,000 and $149,000, respectively) chalked up 48 victories in 201 starts over the course of his career, with $740,637 in earnings.

Though he was never a major stakes player, Primetime Bobcat did capture the $100,000 Gold Cup Invitational and the $115,000 Spring Pacing Champion-ship, both at Woodbine, as well as the $120,000 New Hampshire Sweepstakes, all in 2006. Certainly he was one of the most consistent racehorses of his time, seldom failing to bring home a cheque over a nine-year campaign.

A product of the Armbro nursery of Brampton, Ontario, the Bobcat cut his racing teeth at Woodbine and Mohawk at two, then spent the next few years traversing the tracks of Michigan – Hazel Park, Northville Downs, Sports Creek, and Saginaw – while changing hands a number of times. The gelding was a regular at Windsor Raceway through 2004 and 2005, then was claimed by the Casie Coleman stable for $50,000 on December 31, 2005, and made the move to the WEG circuit. A few months later, conditioner Anthony Montini claimed the nine-year-old Bobcat for $100,000 with partners William and Joseph Rogers and Basil Michele, a move that proved fortuitous, to say the least.

Like a fine wine, Primetime Bobcat just seemed to get better with age. Under Montini’s care, the pacer set the harness world on fire on May 13, 2006, when he delivered a World Record 1:47.2 mile in Open ­company at Woodbine for Jody Jamieson. It was just one of three sub-1:50 miles the Bobcat paced that spring, and included a :26.1 closing panel that he surpassed two weeks later when he paced home with a scorching :25.4 final quarter to defeat American Ideal and Rair Earth.

In his final start of 2006, on December 16, Primetime Bobcat tore a tendon sheath and it was almost a year to the day -- December 15, 2007 -- before he again stepped behind a starting gate. In January 2008, he suffered a bout of atrial fibrillation in a race and was distanced. A month’s rest helped to resolve the minor heart condition, which is common in standardbreds, but wear and tear was clearly beginning to catch up with the Bobcat. The charismatic veteran pacer took several more months off in the summer of 2008, and finally hung up his harness in November of his 11-year-old season.

Montini doesn’t hesitate to credit Primetime Bobcat as one of the most important horses to ever grace his shedrow. “You say the name and the hairs on the back of my neck still stand up,” he grins. “Four years later, he’s still a household name. I’ve never seen a horse like him – even sore and pinchy, he just loved his work. What a heart. He’s a true athlete.

“Unfortunately, his soundness issues caught up with him as he got older. His last start, his head was bobbing, and I decided that was it. I always said that if he wasn’t going to be a useful horse, he could come and live in my backyard. He doesn’t owe anybody anything.”

But as is often the case with old warriors like Primetime Bobcat, retirement seemed to rankle. “He was just depressed at my place, turned out by himself, nothing to do. He wanted to be out with other horses. Liz Waples was helping me out in the barn and she noticed he was depressed, so she decided to break him to saddle. He took to it real well.”

Eventually Montini came to the ­decision that the best way for Bobcat to get on with his new life was to trust the Ontario Standardbred Adoption Society to find him a loving new home as a riding horse. “It was and it wasn’t hard to send him off to OSAS,” Montini says.

“I was happy for the horse, but it was hard to go day by day without seeing him. I’m lucky to have had him. He overcame a lot of stuff and that’s what separates a great horse from a good one.”

“Anthony was prepared to keep (Bobcat) for life,” recalls OSAS adoption coordinator Sarah Lauren Scott, “but he felt the horse was bored and needed more than he could give him. He wanted the best for Bobcat, not just to keep him there standing around.”

Enter Ginny Trepanier, a food services manager and self-described ‘kitchen queen’ at Team Challenge Farm, a drug rehab facility in Lambeth, Ontario. Trepanier, who serves up 200 meals a day to the patients at the facility, was looking for a way to de-stress, and having ridden as a teenager she thought that perhaps getting back into horses would provide a good outlet.

“I had a Western-trained horse named Tosca, who was lovely,” Trepanier recalls. “When my son was born, he was allergic to animals, so that meant no more horses for me for the next 20 years. Once he went off to university, horses came back into my life.

“I needed to re-connect with horses. I discovered OSAS, and was just charmed by the horses I saw on their website. I had absolutely no prior experience with standardbreds, but every horse’s picture was just lovely. They had long legs and the most intelligent eyes.”

Trepanier, who has never witnessed a harness race, had “absolutely no idea that Bobcat was famous,” she says, when she first arranged to meet him.

“I just found him so handsome. I wanted a gelding, and he had the nicest face and the sweetest temperament. Basically, he was the most ridable of the horses I tried … he was ready to do whatever I asked.”

It was only after Trepanier had begun arrangements to adopt Primetime Bobcat that she became aware of his extraordinary roster of accomplishments. “I typed his name into my computer, and was amazed at what came up,” she recalls with a laugh. “I mean, a world record … wow, what can I say?”

The racehorse who was anything but ordinary blends in with the crowd more easily these days. A plain bay, he doesn’t stand out at his boarding stable, and he is not yet setting the world on fire as a riding horse. Since adopting The Bobcat in the fall of 2009, Trepanier has discovered “he is afraid of a lot of things which I guess are just outside his experience at the track. Open spaces scare him a bit. Everything is new for this guy, from the barn to his food and his caretaker. But he loves carrots and licorice Twizzlers.

“He’s got plenty of new stuff to get used to, so we’re just puttering around at the moment. I’m not interested in showing, just in doing a bit of trail ­riding. He has a big field to hang out in here, and is well loved and learning every day.”

Under saddle, the record-breaking pacer prefers to trot, according to Trepanier. He also likes to jump at practically everything. “He’s very spooky, but it’s never malicious,” she says. “He’s sweet. We haven’t tackled the canter yet, apart from a couple of inadvertent steps. I’m in no rush; we’ll move on to that when I’m fully comfortable with him. He is, after all, the first horse I have owned since I was a kid … but I’m having a wonderful time learning with him.”

Some say Primetime Bobcat may have used up eight of his nine lives at the track. His ninth life, however, appears to be a happy and productive one – and that is the best anyone can ask, for any horse who has given so much.