After 320 career starts, all in Ontario, and earnings approaching $500,000, the Downey family decided to send their classy, 14-year-old gelding, Casimirbadmoonrisn, to the Maritimes for a bit of a retirement tour. And now, after hitting the board in 12 of 16 starts on the Coast, he’s back home in Ontario where he’s enjoying the start of a new career.

When a 14-year old pacer goes off as betting favourite in a race, despite facing horses around half his age, he’s probably a pretty special animal. The connections of Casimirbadmoonrisn knew that about their aged campaigner before and after his second-place finish at Fredericton Raceway on September 21st. “Badmoon” laid down a quicker final quarter than any rival in the race (:29.3), passing horses but not quite making his final lifetime start a winning one for trainer/driver Mike Downey.

There would be no official retirement ceremony or farewell pace at either of the New Brunswick racetracks where Badmoon left his mark in 2013. With 41 winners circle photos, a speed badge of 1:50.4 and earnings approaching the half-million dollar mark, Casimirbadmoonrisn had already done more than enough to make his past and present owners proud. Various members of the Downey harness racing clan have driven, trained and campaigned the horse since 2003. Megan Downey is the latest family member to devote time to furthering Badmoon’s career. Her father, Ian, moved from New Brunswick to establish a racing stable in Ontario more than twenty years ago, and Casimirbadmoonrisn raced under his tutelage throughout most of the past decade. Megan, who works alongside her dad every day, recently took over the horse’s conditioning—albeit for a different sport.

Casimirbadmoonrisn had two wins in ten starts last year in Ontario, his fastest being a 1:57.2 victory recorded over Grand River Raceway’s half-miler. But summer 2012 was marred by uncharacteristic breaks and a scratch due to sickness, so the Downeys decided the gelding would do better facing the comparatively mild competition on the East Coast.

“My parents [Ian and Susan Downey] purchased Badmoon at the beginning of his four year old year,” says Megan. “When he was 13, it was getting a little tough on him racing in Ontario, so we decided to send him to my cousin Dr. Mitchell Downey and my uncle Mike Downey so they could have some fun with him in his final year of racing, as it is easier racing in New Brunswick.”

Clearly not the retiring sort, the free-legged veteran began his final year of pari-mutuel racing with a third-place finish in an April qualifier, followed with a win by nearly five open lengths at Exhibition Park Raceway at odds of 20/1. Racing for owner Mitch, Casimirbadmoonrisin made a few other stops on the Maritime circuit in summer 2013: Charlottetown Driving Park, where he was made morning line favourite in a leg of the Alpine Claiming Series during Old Home Week, but only managed a fourth-place finish; Truro Raceway (another fourth); and Fredericton Raceway, where he clocked his quickest win of the year (1:59.3) on Canada Day, while in the midst of an eight-race streak that saw him never finish worse than second.

The brown son of Make A Deal and the River Rouge mare Join Me KV had a fine summer, mainly alternating between the ovals at Fredericton and St. John. From 16 starts, he recorded four wins and seven second-place finishes. Not bad for the gelding with 336 lifetime starts, who took his personal best of 1:50.4 at Woodbine at the comparatively youthful age of seven. His first 2013 win came exactly 14 years and two days from the date he was born, April 25th, 1999.

His co-breeder, Murray McConnell has vivid memories of Badmoon as a colt. “He was kind of precocious. He was one of those horses that stood out,” says the owner of Casimir Farm in Hagar, Ontario. Something of a show-off, the colt was “proud” and “good-looking” in the field, full of energy all the time. “He’d be like a jackrabbit in his stall. You’ve never seen a horse that could stand there on all fours and go ‘boing!’ up in the air and just kick! Most horses have to take a run at it, but he’d just go ‘boing!’. He just felt good.”

When consigned to an Ontario yearling sale, Casimirbadmoonrisn’s smallish stature attracted less interest from bidders than his breeder felt he deserved, so McConnell had a friend buy him back. “I really liked the colt and I wanted him to go to a good trainer, so we ended up buying him back for $6,000 or something like that, and put him in training.”

Four partners shared ownership of Casimirbadmoonrisn as a two-year old, placing him with trainer Rick Howie, and later, Joe Stutzman. “We made some decent money with that horse, but then one of the partners wanted to move the horse to another trainer,” recounts McConnell. “Joe, to me, was one of the best trainers around, [but] when you’re rich (like that partner was), you have weird ideas. He didn’t like paying Joe that kind of money, because Joe charged more than the other guys.” That co-owner and his wife ended up buying out the other partners, although McConnell says he and Stutzman seriously discussed buying Casimirbadmoonrisn themselves. “Joe told me then, ‘For the amount of racing this horse does, he’s the soundest horse in my barn.’”

When Casimirbadmoonrisn’s new sole-owner passed away and his wife liquidated their racing stock, Ian Downey purchased the gelding. “He [Casimirbadmoonrisn] was a pleasant surprise,” says McConnell, who followed the pacer’s career. “Every time I saw him in racing, he was almost always in the money.” Getting behind the gate alongside big names like Ponder, Escape The Wind, Primetime Bobcat, Whosurboy, Secrets Nephew, Silent Swing and Admirals Express at Woodbine and Mohawk, this was no small achievement. 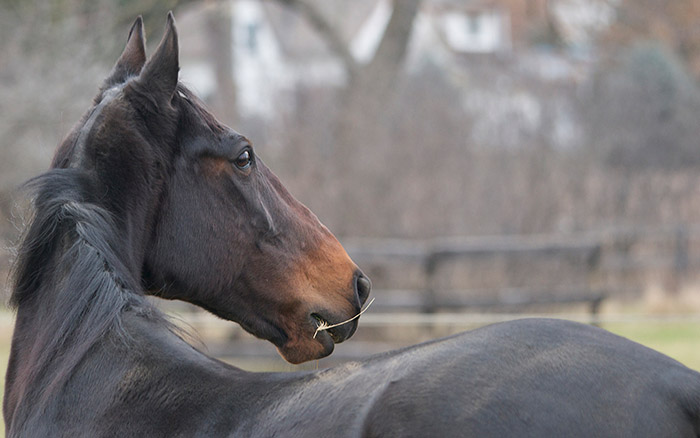 McConnell says that Casimirbadmoonrisn racing until age 14 is an even greater accomplishment for both horse and trainer. “The longevity definitely surprises me, because in this business, nobody expects it, but he had excellent conformation,” the breeder says of Badmoon. “The thing was, he wasn’t a big horse. Big horses, they’re great, they go fast, but they go fast for a short time.” Will to win, good gait and a big heart in a “small to medium” package are what he credits with keeping the Casimir Farm graduate successful for so long. The pacer who collected minor cheques in five of six Ontario Sires Stakes Grassroots starts at three was still bringing home the bacon-—$3,602 in 2013, to be precise—in the twilight of his racing days.

Badmoon earned a reputation as a dependable aged performer, often overcoming outside post positions on half-mile ovals. “He has had great accomplishments, such as when he got his life mark in 1:50.4, at that time making him the fastest Make A Deal,” recalls Megan Downey. Casimirbadmoonrisn’s most unusual achievement was one that led to a subsequent equipment change: “ He broke a hopple one night in a race and still won the race, after which we removed the hopples and made him a free-legged pacer.”

Casimirbadmoonrisn’s late turn of foot made him a formidable contender toward the end of many a race. But closing in on the end of this year, the Downeys opted to shut him down before the final quarter of the 2013 racing season. Megan says there was no attitude, health or soundness issue behind the decision. “There was no real reason,” she tells Trot. “In 2011 he won the seniors’ pace in London [on] New Years Eve, for older horses, where he showed off his class.” When Badmoon won that inaugural Auld Lang Syne Pace at age 12, he did it with Bruce Richardson in the irons and, as usual, the second and third finishers were a few years his junior. By the time the age of mandatory retirement approached this year, another event aimed at “mature” pacers wasn’t really necessary.

It’s little wonder the Downey family didn’t gear up for a trackside celebration when Casimirbadmoonrisn hung up his harness for the last time. Megan is a little nonchalant about it. “I guess we just never notified Standardbred Canada about him retiring,” she confesses. The gelding is now stabled at Meadowbranch Training Centre, a farm in Flamborough, where he’s far from a pasture ornament. “I decided after we retired him I would keep him as a riding horse and this way we knew he had a home for life,” she says. “Any horse that races until they’re 14 years old is a warhorse and deserves a home for life in my eyes. So we shipped him back to Ontario.”

December 31st will bring no radical changes to the life of the battle-seasoned pacer. He left the track in September and remains in familiar hands, albeit learning some different skills. Badmoon’s future will be as a saddle horse,” confirms Megan. “I have ridden horses my entire life, and Badmoon has been a big part of my life since we’ve had him for so many years.”

Casimirbadmoonrisin “is loving retirement”, according to Megan. “He loves going outside every day, and then coming in just in time for a hot mash lunch and hay. However, he is the type of horse who loves his work too, so now his new love is being a riding horse.” Like many off-the-track standardbreds, the gelding is adjusting well to his latest occupation, says Megan. “I have just started Badmoon’s riding career in the last few weeks [in early November] and he is loving his new job.” There are plenty of perks to his work as a saddle horse. “Badmoon has a love for ‘stud muffins’, which is molasses and horse feed mixed together. He knows where they are kept in the barn, and if you are headed in that direction, he is sure to tell you he would like one or two!”

Megan “hasn’t 100 percent decided yet” whether to retrain Casimirbadmoonrisn to specialize in jumping or barrel racing. But there’s at least one family member who will miss the horse’s brief specialization in Maritime harness racing. Mitch Downey sums up his feelings on Casimirbadmoonrisn’s permanent exit from the scene: “He is truly a warrior. A consummate professional who loves to race. I wish I had owned him when he was five!”