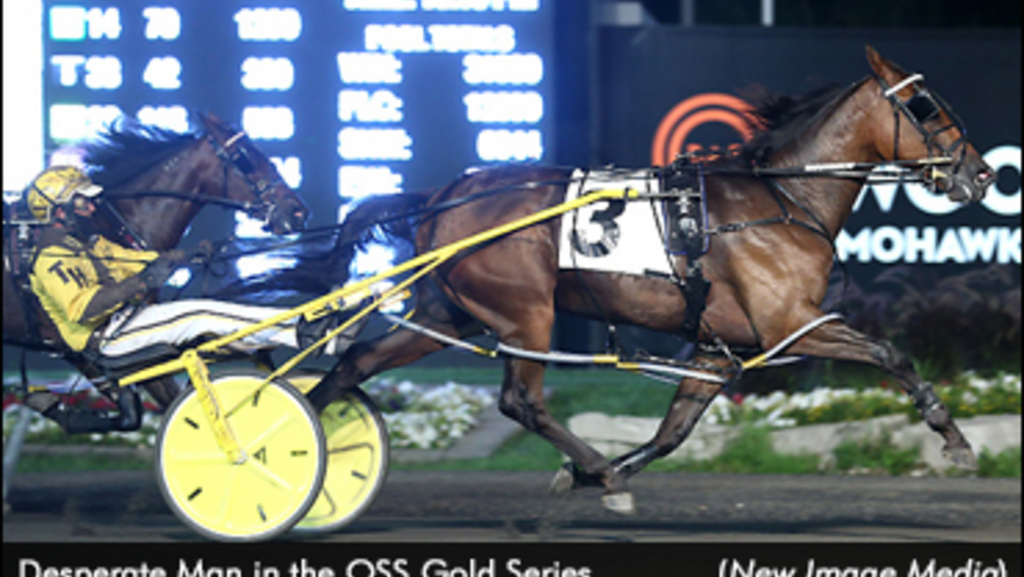 As trainer Kathy Cecchin waited in the paddock for Desperate Man’s North America Cup elimination last week, her husband, John, asked how the horse was doing.

Desperate Man, a $20,000 yearling purchase who in his earliest days in Cecchin’s stable acquired the tongue-in-cheek nickname 'Slick', demonstrated his usual relaxed disposition by snoozing away prior to his elimination.

Fortunately for Cecchin, he wasn’t caught napping when it was time to go. In the first of two eliminations, Desperate Man finished second by a length to Bulldog Hanover, charging home in a race-best :25.4 after being last in the six-horse field at the halfway point. The time for the mile was 1:49.

On Saturday, Desperate Man will start the $1 million North America Cup final for 3-year-old pacers from post six at Woodbine Mohawk Park. Regular driver Trevor Henry will be in the sulky.

“We are happy, thrilled, and feel blessed to be here,” Cecchin said. “I’m very nervous. It’s a great field. They are all great horses. They didn’t get here by luck. Everybody worked hard to get here.” 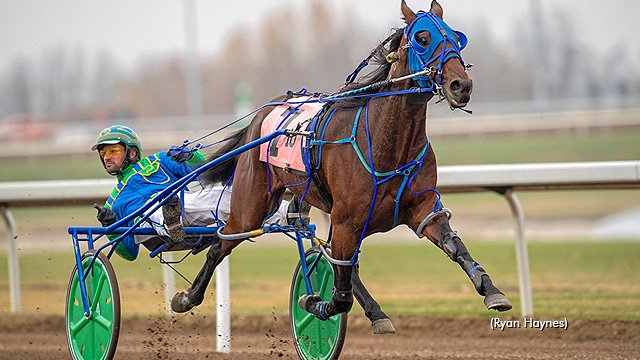 “He is an amazing horse for them,” Cecchin said about Outlawgrabbingears, who was Alberta’s two-year-old male pacer of the year in 2018 and has banked $330,855 lifetime. “I was looking to find a yearling that was related to him. I picked Desperate Man strictly based on his pedigree.”

Cecchin did not attend the 2019 Lexington Selected Yearling Sale, but Henry was among a group that examined Desperate Man and gave the thumbs up. Jim Fleming bid for Cecchin and signed the ticket after getting the horse for $20,000.

“I thought he would sell for more; I was so surprised,” Cecchin said. “I had taken some little forays into the yearling market before and never had enough money. We didn’t know we got him until the results came up.

“When it said Jimmy Fleming was the purchaser, first I was so excited, I was crying. Then at 2 o’clock in the morning, I was lying in bed thinking I’d lost my mind. What was I thinking? What was I doing? Nobody thought he would be anything like this. He is very special.”

Desperate Man got his nickname Slick because, as Cecchin said with a laugh, “he was anything but.”

“He was very babyish for the longest time,” Cecchin said. “He was big and kind of fumbly gaited and just kind of flopped around. He never showed that he was brilliant or anything like that.”

Then Desperate Man made his first qualifying start. He won in 1:57.2 at Mohawk, pacing his final quarter in :26, with Henry driving.

“There wasn’t a lot of expectations,” Cecchin said. “When he came home in 26 seconds flat, everybody was all of a sudden like, oh, OK. That’s pretty darn good.”

As a two-year-old, Desperate Man hit the board in five of six races, winning three. All of his wins were in Ontario Sires Stakes Gold divisions. 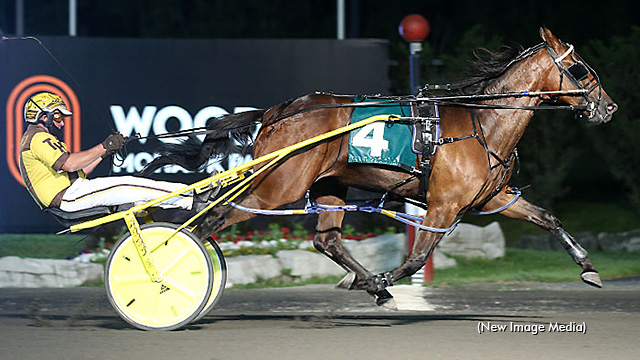 This season, the gelding has won one of eight races, with three seconds and a third. His victory came July 25 in another Gold division, where he defeated Meadowlands Pace champ Lawless Shadow and Bulldog Hanover. In his three most recent starts, he finished second twice to Bulldog Hanover and once to Whichwaytothebeach.

“He’s not a horse that can make his own luck,” Cecchin said, noting Desperate Man rarely races near the lead. “But we have the utmost faith in Trevor that he will work out the best possible trip, and then whatever happens, happens. If he’s not good enough, he’s not good enough. It’s not going to change our opinion of him.”

“He’s almost extremely lazy,” said Cecchin, who grew up in western Canada and is a third-generation horseperson. “People laugh at him in the post parade. It’s funny. He just dawdles along. Sometimes he stops, looks around. You see the other colts, and they’re very racy. He doesn’t get too worked up.”

Desperate Man is the only horse Kathy trains while John has three horses at the moment. The Cecchins, who had their first date in the kitchen at Mohawk, have been together 30 years and have a 45-acre farm in Arthur, Ontario, about an hour north of the racetrack.

In addition, Henry and his wife Shannon are longtime friends of the family. They have horses at the Cecchins’ farm and often enjoy holiday celebrations together.

“I’m really glad we are all sharing this,” Cecchin said. “It certainly makes it much more special. And we have a lot of friends and family coming out Saturday to support (Desperate Man), which is very touching. It means a great deal to us that people are going to come out and cheer.

“This is a ride of a lifetime, that is for sure. If it has a fairytale ending, that would really be the ticket. I don’t know if it can, but it would sure be something.”