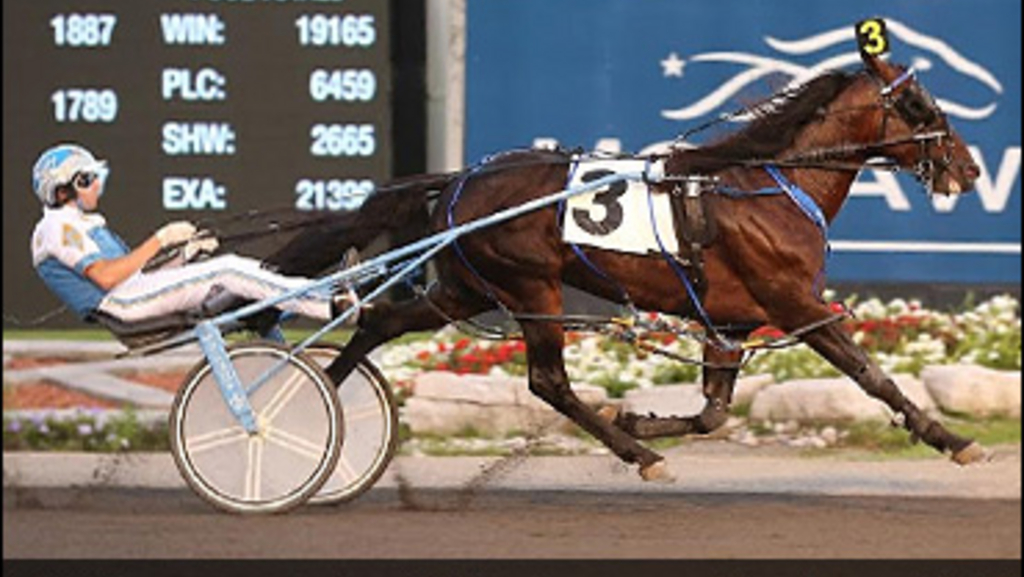 The seven-year-old son of Real Desire, from the Western Ideal mare Ideal Treasure, made his last stakes appearance in the $500,000 Ben Franklin Final on July 2 at Pocono Downs, where he raced from off the pace and finished seventh to Always B Miki in a 1:47 mile.

“I think he got tired of chasing them,” Dr. Ian Moore said. “I’m not saying that he’ll step right up and go [1]:47 again, but I am saying that he seems different this time of year than he was earlier in the year.”

State Treasurer’s first win this season was in his tenth start, on July 23, at Mohawk in the Preferred, where he paced in 1:48.4.

“He maybe wasn’t quite as good at the start of the year,” Moore said. “But he’s the type of horse that really excels on winning because it instills confidence into him. I know people may wonder when I say that, but some horses definitely become confident when they win. He’s one of them.” 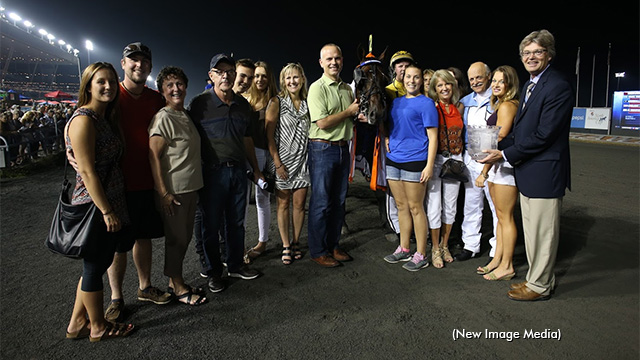 Entered into a $34,000 Preferred on August 6 at Mohawk, State Treasurer was lame in his jog the day prior and was scratched. Moore found that the horse had stepped on a two-inch #10 screw that burrowed into his left hind hoof. He was given antibiotics to prevent infection from the injury and returned to race on August 13, winning the Preferred in 1:50.1 from post nine. Then on August 20, he won as the 4-5 favourite in 1:48.3.

“One of the owners wanted to race him [in the Preferred] last week and I thought a week off would be best,” Moore said. “But it didn’t matter anyway; [Mohawk] didn’t go with the top class. He jogged very sharp all last week.

“I trained him today [Wednesday], and he trained probably as good as he ever trained,” Moore also said.

Earning $2,058,130 in his career, State Treasurer will race from post three for owners Sally and Paul MacDonald. Chris Christoforou will drive.

“Obviously the big three are Wiggle It [Jiggleit], [Always B] Miki, and Shamballa, and everybody will be betting on those guys,” Moore said. “But they’ll know he’s there; he’ll give it his all. This is his home track and he has his regular driver with him that night, so he’ll be very tough.”

Moore’s other trainee, Rockin In Heaven, who he owns in partnership with Douglas Polley, Francois Lecomte, and Gordon McComb, drew post five for his first start since finishing third in the $200,000 Prix D’Ete.

“He has been a very nice surprise for us over the last couple of years for us and he continues to surprise us,” Moore said. “He was charted going 1:48.3 this year and 1:48.2 in the mud. He’s a pretty nice horse who always seems to give his best, too.”

The four-year-old son of Rock N Roll Heaven from the Jennas Beach Boy mare Tropics Beachgirl has earned $512,361 in his career.

“We’re very proud and pleased to have two in the [Canadian Pacing] Derby,” Moore said. “We’re hoping for a good trip and to pick up some money.”

The Canadian Pacing Derby is carded as the tenth race on the 13-race program.

Here is the full field for the $616,000 Canadian Pacing Derby Final.

Fans will be able to meet several former Canadian Pacing Derby and Metro Pace winning drivers during an autograph session getting underway 6:20 p.m. Fans will also be able to sign up for a sulky ride (limited spots), enjoy live music and receive their ‘First Bet on Us’.

To view the entries for Saturday's card at Mohawk, click one of the following links: Saturday Entries -- Saturday Program Pages.

(with files from WEG)