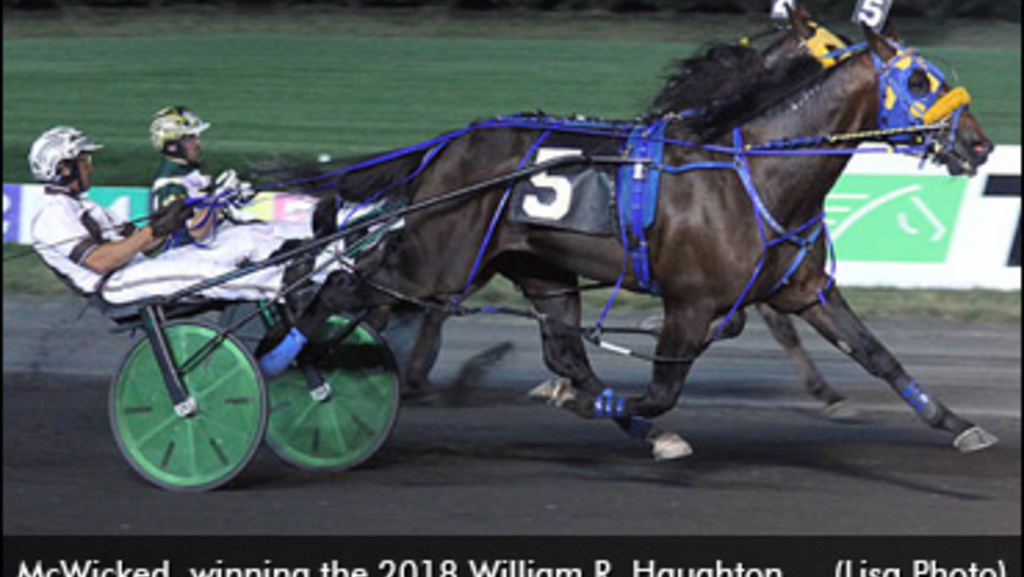 Ever since he began to perform limited stallion duties during the offseasons, McWicked has realized he’s a 'man'. Ever since the beginning of this year’s racing season, he’s been The Man.

McWicked enters Saturday’s $260,100 Sam McKee Memorial for older male pacers at The Meadowlands Racetrack with six wins in eight starts this season, including victories in the William R. Haughton Memorial on July 14 and the Ben Franklin Pace on June 30. He is the 2-1 morning-line favourite in a field of 12 that will go the distance of 1-1/8 miles rather than the traditional mile. He will start from post 12, in the second tier, behind Funknwaffles in post two.

In his most recent win, on July 21 in the preferred at Woodbine Mohawk Park, McWicked rallied from fifth at the halfway point to beat Easy Lover Hanover by a neck in 1:50.1. He paced his final quarter in 25 seconds.

“He was really good,” trainer Casie Coleman said. “They had a really slow half (:56.4) and he had a lot of ground to make up, but he did it. He did it quite easily actually. I was very happy with him.

“He had a three-week gap in the schedule (between the Haughton and McKee) and I wasn’t sure what I was going to do. I ended up racing him and it worked out well.”

The seven-year-old McWicked was the Dan Patch Award winner for best three-year-old male pacer in 2014. He was winless in a combined 14 races at ages 4 and 5 because of breathing issues and multiple throat surgeries, but bounced back last year with seven victories in 27 races and $598,335. This year, McWicked has already earned $574,561 as he tries to become the first pacer to win a Dan Patch Award at ages two or three and add another beyond the age of five.

For his career, McWicked has won 28 of 82 races and nearly $3 million.

“It’s crazy to think that at seven years old he’s getting better, but it kind of seems like it,” Coleman said. “He honestly has not put in one bad start. The couple times he got beat he raced just as good as the days he won, it’s just the trips didn’t work out.”

McWicked is owned by Ed James’ S S G Stables. McWicked has bred a handful of mares in recent offseasons for James, which has brought about a change in the stallion’s personality.

“When he was three he acted like a gelding to be around,” Coleman said. “He was a very calm, cool horse.

“Now he’s definitely not a kid’s pony. When he comes into the paddock, everyone knows who’s coming because he’s roaring and screaming. He’s nice to jog and train, he’s real quiet, lazy if anything, but he definitely knows he’s a man now that he’s been breeding. But he makes it worth it because every time he steps on the racetrack he usually does pretty good.”

The McKee Memorial, formerly the U.S. Pacing Championship, honours the late Meadowlands Racetrack announcer and Communicators Hall of Fame member Sam McKee, who passed away in 2017. This year’s race also includes defending champion Check Six as well as millionaires All Bets Off, Dealt A Winner, Filibuster Hanover, Mach It So, and Rockin Ron. Miso Fast is the 4-1 second choice.