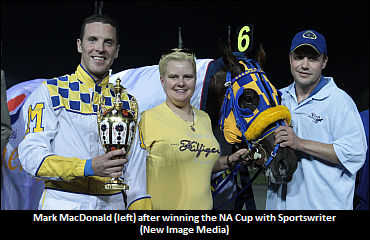 The event will take place at the Halton Country Inn (aka. 'The Rockpile') on Wednesday, July 6 and will get underway at 6:30 p.m.

Tickets to the dance, which will include food and a cash bar, are $20 and may be purchased at Tackmaster Equipment or from Jody Jamieson, Anthony MacDonald or Jack Belliveau.

Belliveau told Trot Insider that "if we raise a few dollars to offset some of Mark's expenses during his lengthy recovery period that would be great, but what we're really looking to do is to have a get together to show him that we're thinking about him and supporting him during this difficult time."

MacDonald, who has been involved in enough wrecks to last a lifetime, was injured in a serious accident at Mohawk Racetrack on May 26 where he was thrown violently to the track before being taken to hospital. Among other injuries, the O'Brien Award winning driver suffered a dislocated shoulder, a broken nose and jaw, and damage to his arm and wrist. He was released from hospital on May 30 and is currently recuperating from his injuries at home.

I have to say I am shocked

I have to say I am shocked at the comments from Mr Smith. We on PEI and more importantly those in the harness racing industry are always there supporting one another.
I am shocked that someone who would read the above article on Standardbred Canada would write such comments about someone who has been injured. A person's financial status or prior year earnings does not mean anything when it comes to sustaining injury and more importantly in the healing whether it be physically, mentally or emotionally from injuries sustained from an accident.

God bless the harness racing community for organizating such an event for a fellow horseperson. Good luck at the event on July 6th.

Mr Smith may you be so lucky never to find yourself injured and unable to work - perhaps you should rethink the above words you have written.

Mark, God's speed in the healing of your injuries.

Ok you Mr. Smith are way out

Ok you Mr. Smith are way out of line! Do you think that the Mark MacDonald that I know would really stand in line for charity? I think you are wrong! This party is exactly what the Harness Racing community does for a fella who is injured. We offer support and (heaven forbid) maybe he can never do what he did before. So Mr.Smith, I will be at the dance, I guess maybe you should stay home...

Peter - I kind of agree with

Peter - I kind of agree with you and kind of don't. Mark is a GREAT person and does alot for the racing community as a whole and for the community to give back to him is awesome. He has given his life (and body) to the sport and its great to show respect for that no matter how much money he has mad in a lifetime. I hope that the wording of your post was in a matter that doesn't give it justice because for you to think that someone that is better off Financially than other people is not someone that should have a "event" held for them in their honor when they are hurt and un-able to preform is odd.

I think that for you to say that Mark should not be looked at in this manner is absurd and rude on your behalf since if someone in your family or close to you was in this situation you may want to have the backing of the industry there - sometimes that is what is needed to turn a persons attitude towards their recovery around and lets them know they are missed and loved even though they are not at the track.

WHO KNOWS - maybe Mark being the great guy that he is - will use some funds (if possible) and donate them to someone/thing that he deems necessary its not YOUR call to make - I just find it really RARE that you don't "support" this event.

Ouch Mr Smith! What a great

Ouch Mr Smith! What a great attitude to take in light of the fact that the young man was badly hurt and out of work for an extended period now. Its that kind of attitude that is eroding our industry and harness community.

How many hundreds of

How many hundreds of thousands of dollars did Mark McDonald earn last year? I would prefer if the money went to a charity - or at least a portion of the money.