During the early morning hours of Thursday, December 9, Brenna Seeley, 24, of Guelph, Ont., was killed in a car accident on the outskirts of Russell, near Ottawa. Arrangements have now been announced

Reports indicate that at around 2:00 a.m., paramedics arrived on the scene of a rollover on Route 100 between Boundary Road and Hamilton Road, about 30 kilometres southeast of downtown Ottawa, after the 25-year-old driver of the truck, Tomas Dalborg walked to a nearby house and called 911. Seeley was found trapped in the overturned vehicle with no vital signs. 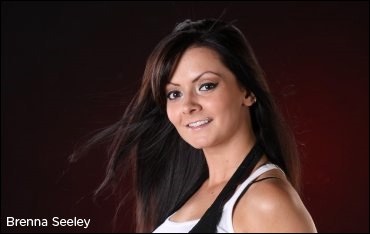 Seeley worked at Kawartha Downs for Telephoto assisting with photo finish equipment. She also previously worked as a groom for Susie Kerwood.

In February 2009, Seeley graced the pages of the Toronto Sun as a Sunshine Girl - the first of two features for Seeley, the next coming later that year in November. Brenna told Trot Insider the story of being discovered while working as a waitress at Hooters to set aside enough money to invest in a farm and standardbreds.

"I thought a great way to make some cash would be to apply for a job at Hooters at the Toronto Airport," noted Seeley. "I work everyday in the crowded city and tell my story of my dream to all my customers. Everyone knows me as 'the horse girl'.

"It's amazing how things can change so quickly," beamed Seeley. "One moment you're cleaning stalls and the next you're doing a photo shoot. The thing is, people would never believe which one I prefer!"

Brenna continuously promoted harness racing while trying to fulfill her dream as an owner. She is survived by her father Warren and mother Terry.

If desired, memorial contributions may be made by cheque to the Canadian Cancer Society.

Please join Standardbred Canada in offering the sincerest condolences to the family and friends of Brenna Seeley.

Very sad state of affairs with the loss of a beautiful girl who loved harness racing. My thoughts and prayers to Brenna's family.

so very sorry to hear of

so very sorry to hear of this tragedy, condolences to the family, and friends of this fine young woman, and to Tomas, this will take a long time to heal, but with the support of your family and friends, healing will come.......GOD SPEED TO U ALL.....God just got another beautiful ANGEL.....our thoughts are with u all

Our Prayers are with you, To

Our Prayers are with you,

To Brenna's Family, my name is Bruce Armstrong, I am the Fire Chief of the Russell Volunteer Fire Department. We were the first on scene for Brenna's accident, our prayers go out to you through this difficult time from the entire Russell Fire Department family.

I have commented on this

I have commented on this site many times. Most of the times it is in reference to the state of the industry, the drivers/jockeys efforts (or lack thereof)etc.etc.
Today, it is with much sadness that my comments are on an entirely different subject.
The passing of this beautiful young woman is heartwrenching to those who knew her. I did not know Brenna. However having been involved in the horse racing industry for 35 years (for a few years as an onwer of a pacing mare) I have learned how tightly knit the horse racing community is. Even as a simple fan or bettor if you hang around long enough you eventually begin to feel like part of a bigger family. To those who are invovled they know exactly what I am speaking about. The horse racing community have always looked after their own and each other. There were many people in the industry who knew Brenna quite well as is evidenced by the outpouring of love, shock and sadness on this webiste as news of her passing spread. I am sure Brenna must've touched a lot of lives and brought many a smile to people's faces.
Therefore for a short while at least I will put aside my disdain at some of the things that happen in this industry that give it a black eye and instead will focus on the hurt, the sorrow, and the fond memories of a wonderful perosn that the horse racing community now struggles to deal with.
My prayers are with Brenna and her family and all those close to her. I offer my sincere condolences to her family and friends.
As we approach Christmas time I pray that Brennas family and those who new her may find comfort and solace in the hope that Brenna is now in the care of Our Lord Jesus Christ.
May He take Brenna up into Heaven and may Brennas family and friends experience the true peace and comfort that can only come from Him.

God Bless and may Brenna's soul rest in peace.

What a tragedy. My

What a tragedy. My condolences to Warren, Terry, family and friends. Brenna was such a wonderful person. She will be missed by many.
Carli Watts

So So Sad, what a terrible

So So Sad, what a terrible accident, she was such a wonderfull girl, what a waste of a young life, codolences to all the family, we have such nice memories of our time with Brenna.Keith and Evelyn Simpson.

Our hearts and thoughts are

Our hearts and thoughts are with you Tomas, and with Brenna's family. What a wonderful person - she will be greatly missed.
Alison and Dan (O'Brian)

I am in deep shock!! My deepest condolences to Warren, Tomas and Terry and all of her many, many close friends. This is so heartbreaking!!

So tragic... My sincere

So tragic... My sincere condolences to Brenna's family and friends.

The management and employees

The management and employees of ONTrack Media & Entertainment (TelePhoto)send prayers and our deepest sympathy to Warren, the rest of Brenna's family and her friends. Harness racing has lost a fine young representative. What a sad, sad tragedy.

What a tragedy. Sincere

What a tragedy.
Sincere condolences to Brennas family and also to you Tomas.

OMG My thoughts and Prayers

OMG My thoughts and Prayers go out to Brenna's Family such a wonderful Lady taken away by such a Tragic Accident!!!

Such tragic news... Our

Such tragic news... Our thoughts and prayers are with Brenna's family and friends, especially Tomas.

Horrible news.....our thoughts and prayers are with you

The prayers of everyone here

The prayers of everyone here at Kawartha Downs are for the family and friends of Brenna at this time. So terrible that such a young, vibrant life has tragically ended. Brenna used to work here doing the photo finish where she always came to work with a great smile that could warm up any room in a heartbeat, always warm, friendly and loved racing and the people in racing a great deal. Her dad Warren has the same position here now and to him and her mum Terry our thoughts are with you at this terrible time.

My condolences and deepest

My condolences and deepest sympathies to Brenna's family. She will be missed by everyone, including her friends at Kawartha.