Trotter On A Winning Mission

Driver Chris Page says Mission Accepted is the type of horse that can be expected to deliver a good effort every time he goes to the races. The six-year-old male trotter has won 16 times this season — a total surpassed by only one male trotter in North America — and earned a paycheque in 25 of 29 starts. 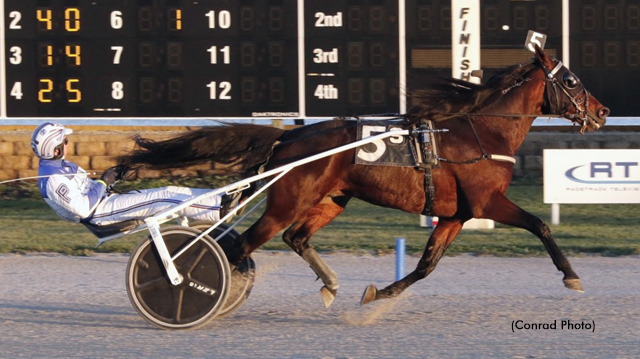 Such consistency would be worthy of admiration under any circumstances, but Page noted a special reason he is grateful for Mission Accepted’s reliability. He and wife Brianna welcomed a son to their home a little more than 11 months ago.

“He’s paid for a lot of diapers and formula,” said Page, who has driven Mission Accepted in all but five of his races this year. “He’s definitely a nice paycheque every week, especially around here in the Open Trot.”

On Thursday, Page and Mission Accepted will be back in action for trainer Ron Burke in the $28,000 Open Handicap at Hollywood Gaming Dayton Raceway. Mission Accepted was assigned post eight in a field of eight and is the 2-1 morning-line favourite.

“That horse is a blue-collar worker and shows up every week,” Page said. “Since I’ve been driving him, he’s never put in a bad effort. Now, I’ve given him a couple of bad drives, but he always shows up and he likes his job.”

Earlier this year, Mission Accepted topped $1 million in career earnings. Lifetime, the son of Manofmanymissions-Witty Girl has won 36 of 93 starts and $1.17 million. He was bred by Knox Services Inc. and is one of three Ohio Sire Stakes champions out of Witty Girl, with younger full brother Wittyville and younger half-sister Merry Ann.

“When he was young, he didn’t make an impression one way or another,” Knox Services’ Kris Brechler said earlier this year. “He was just average-looking. But I wish you could see inside of them and see what kind of heart they have, because that’s a lot of it. He gives his all, all the time. He gives 100 per cent every time he’s on the track. You always feel you have a chance with him.

“He’s just been a wonderful horse to have and it’s extra special because we bred him. He’s one of those horses that you wish you could have 10 of in your barn.”

In November, it was announced that Mission Accepted would perform stud duty in 2022 at Sugar Valley Farm in Ohio, with the possibility of continuing to race.

But for now, Page is focused only on the stallion’s next start. Mission Accepted’s fastest win time this season, 1:52, which he accomplished twice, puts him in a tie for fourth quickest among all older male trotters on a five-eighths-mile track.

“I think he’s going to keep right on rocking,” said Page, who himself has enjoyed a career-best season with $6.50 million in purses. “He definitely has gotten used to racing on the outside. This whole year, in any of these Open events, he’s been assigned the outside [post]. He’s done pretty good from out there.”