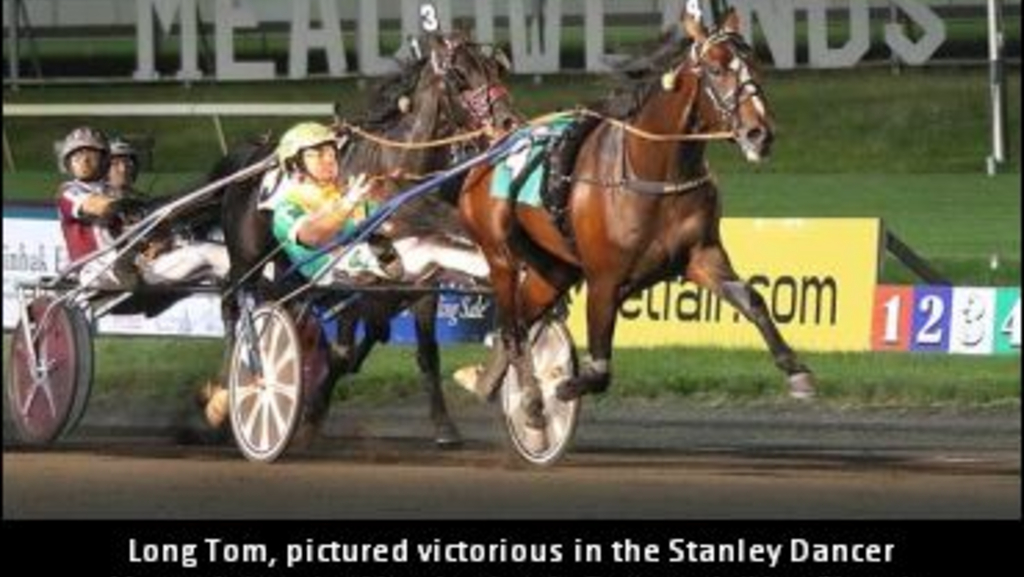 Muscle Hill colt Long Tom 3, 1:52.1, whose career included victories over What The Hill in the Stanley Dancer Memorial and New Jersey Sire Stakes championship, has been retired to stud duty at Midland Acres in Ohio.

“We are thrilled to have a Muscle Hill son of Long Tom’s calibre to stand at stud in Ohio,” said Midland’s Dr. John Mossbarger. “Long Tom is a handsome horse with good size and we are pleased with the results of a fertility test that was recently conducted right off the racetrack.”

Trained by Marcus Melander, Long Tom won Grand Circuit stakes at both ages two and three. As a freshman he took a mark of 1:55.2 at the Red Mile, where he won his Bluegrass division on the front end. The following week in Lexington, he was hard used in the International Stallion Stakes and finished third and trotted his own mile in 1:53.3.

This season as a three-year-old, Long Tom began his sophomore season by dominating the New Jersey Sire Stakes at the Meadowlands Racetrack. He went on to win an elimination for the Beal Memorial by open lengths, and was poised to capture the $500,000 Beal final after having cut the fractions, but was edged when a horse came up the passing lane and finished a close second. He won his $161,500 Stanley Dancer Memorial division at the Meadowlands with a last quarter in :27.

Long Tom is out of the mare Ilia, a daughter of Windsongs Legacy. Long Tom is Ilia’s second foal – her first was the $300,000-plus winner Tight Lines. Ilia is from the maternal family of Yankee Duchess, the third dam of Muscle Hill, thus Long Tom carries three doses of this modern foundation mare, with a 4x5x5 cross.

Long Tom will be syndicated and his fee for the 2018 breeding season has been set at $3,000 for a live foal.

For more information about purchasing shares, contact Midland Acres at 740-437-7800.