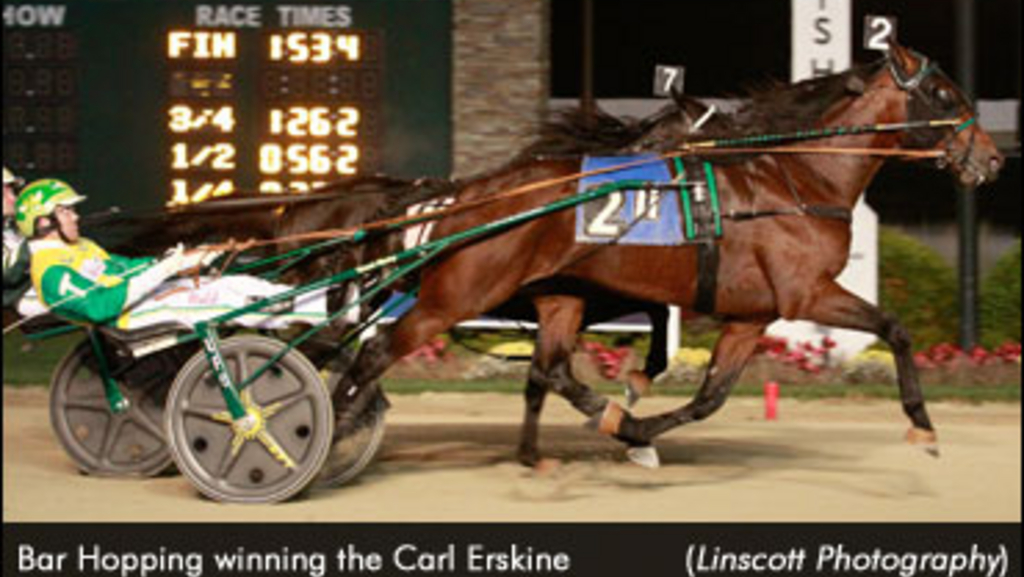 For the second consecutive year, trainer Jimmy Takter will send a three-year-old colt to challenge older rivals in the TVG Free For All Series championship for trotters at the Meadowlands Racetrack. Last season, it was The Bank. This time, it is Bar Hopping, who on Saturday will try to become the first three-year-old male trotter in recent history to win against older foes in a series final worth at least $100,000.

The Bank and Bar Hopping received invitations to the TVG championship as Breeders Crown winners. Bar Hopping won his ‘Crown’ on Oct. 29 with a stakes-record-equalling 1:51.4 mile at the ‘Big M’ and followed that victory with a track-record 1:53.4 triumph in the Carl Erskine Trot on Nov. 4 at Indiana’s Hoosier Park.

For the year, Bar Hopping has won nine of 18 races and earned $1.17 million in purses. He has won six of his last seven starts, including the Breeders Crown, Erskine, and Canadian Trotting Classic. His only setback during that span was a third-place finish in the Kentucky Futurity, where he was beaten by a half-length by Trotting Triple Crown winner Marion Marauder.

Bar Hopping and driver Tim Tetrick will start the $400,000 TVG championship from Post 3 and are the 4-1 second choice on the morning line. Resolve, the defending TVG champion from the stable of Ake Svanstedt, is the 7-5 favourite.

“He’s definitely on top of his game,” Tetrick said of Bar Hopping. “Really, all year he’s raced pretty good. He had a couple hiccups here or there, but the horse is sharp right now. He won really good at Hoosier and he was great in the Breeders Crown.”

According to the U.S. Trotting Association's Information and Research Department, Bar Hopping is seeking to become the first three-year-old male trotter in recent history to win against older foes in a series final worth at least $100,000 since Before He Cheats captured the $120,000 Chester Late Closing Series in 2007.

The only other instance since 1992 of a three-year-old trotter winning a race worth at least $100,000 against older horses came on the female side, when filly CR Kay Suzie defeated seven mares in the Breeders Crown at the Delaware County Fairgrounds in Ohio.

Last year, The Bank finished seventh in the TVG.

Resolve has won five of 12 races this year and earned $1.31 million. He won the Yonkers International Trot and Maple Leaf and finished second in the Breeders Crown Open Trot and Sweden’s Elitlopp.

Obrigado is a multiple-stakes-winner and JL Cruze, last year’s divisional Dan Patch Award winner, was third in the Breeders Crown.

“All we can do is hope for a good trip and hope some of those big boys have a day off,” Tetrick said of Bar Hopping’s challenge. “Maybe we can end the season on a great note.”

Breeders Crown Mare Trot winner Hannelore Hanover is the 7-5 morning line favorite in the TVG for trotting mares. Bee A Magician is the 2-1 second choice.

Always B Miki, the Breeders Crown Open Pace champ and the fastest horse in harness racing history with a 1:46 mile record, is the 1-5 choice in the TVG for older male pacers while Breeders Crown Mare Pace winner Lady Shadow gets the 4-5 nod on the distaff side. 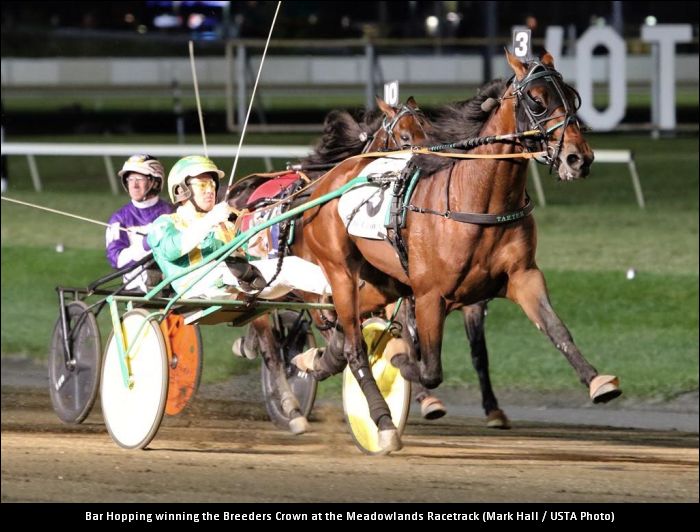