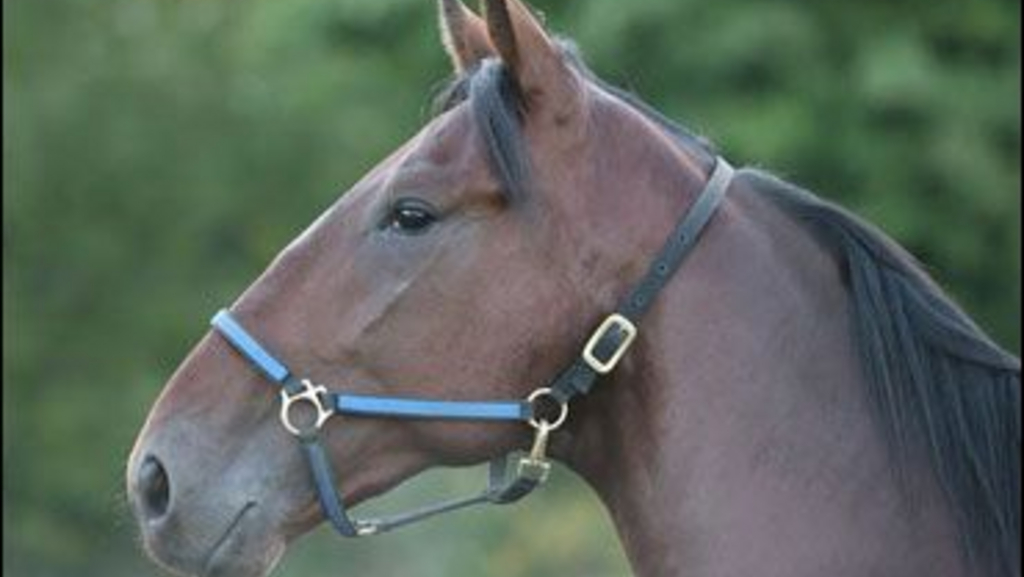 Trot Insider has received confirmation that Somebeachsomewhere p,3,1:46.4 ($3,328,755), the superstar Standardbred both on the racetrack and in the breeding shed, has passed away at the age of 13. 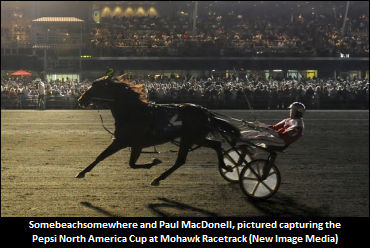 On November 19, 2017, Brent MacGrath had told Trot Insider that ‘Beach’ had a small cancerous mass – a large cell lymphoma – removed and had begun a six-week round of chemotherapy.

The mass, which was roughly half the size of a grape, was discovered after Hanover Shoes Farms’ farm manager, Dr. Bridgette Jablonsky, elected to send the superstar son of Mach Three to an equine hospital. Beach, who had dealt with colic and some stomach issues in the past, had been suffering from some discomfort. After having located the part of Beach’s intestine that was causing the issue, the small mass was then detected.

Somebeachsomewhere, who had the mass removed earlier in November, had commenced chemotherapy on Saturday, November 18. Beach’s treatment had been overseen by internal medicine specialist Dr. Rodney Belgrave of the Mid-Atlantic Veterinary Center. Three biopsies of the mass had been conducted, one of which came back as positive for cancer.

Driven by Paul MacDonell and campaigned by Brent MacGrath for the Nova Scotia-based Schooner Stable, world champion Somebeachsomewhere won 20 of his 21 races during his legendary career and earned $3,328,755 in purses. His major victories as a freshman included the Battle of Waterloo, Metro Pace, Champlain Stakes and Nassagaweya. At three, his highlights included the Burlington (which was later renamed the Somebeachsomewhere Stakes), Pepsi North America Cup, Confederation Cup, Simcoe, Bluegrass, Tattersalls, Messenger, Ontario Sires Stakes Super Final and Breeders Crown.

The two-time Canadian Horse of the Year was inducted into the Canadian Horse Racing Hall of Fame nine months after he retired – at the time holding eight world records. Somebeachsomewhere went on to stand stud at Hanover Shoe Farms. His offspring earned more than $87 million and he was the first sire in harness racing history to top $20 million in progeny earnings in a single season. Among his offspring are 13 millionaires, including Captaintreacherous ($3.15 million), Pure Country ($2.41 million), Downbytheseaside ($2.28 million), Huntsville ($1.8 million) and Check Six ($1.61 million).

Please join Standardbred Canada in offering condolences to the connections of Somebeachsomewhere.

I am deeply saddened by the

I am deeply saddened by the loss of the Beach. However the racing memories will be remembered and cherished forever. Rest In Peace Somebeachsomewhere.

I've seen a number of great

I've seen a number of great horses race but there was NEVER a horse that I loved to watch more that "The Beach". (Being from Nova Scotia may have jaded me?)
Congrats and thanks to Brent McGrath, Paul MacDonell, and all the connections to this great Champion. I'm sure his offspring will keep him in our thoughts for many years to come.

You made us smile, you made

You made us smile, you made us cheer, you always showed that crazy gear. The winners circle, you always found, and I swear your feet never touched the ground, you battled so hard, and battled so mean, but one battle left was unforseen, you fought so hard, until the end, now its our broken hearts, that have to mend, thank you buddy, for all the great years, as I write this for you, im full of tears, now your resting, and free from pain, we will never forget you, down memory lane, good bye our friend, and we hope to share, a carrot for you on Somebeachsomewhere

Barry and I send our deepest

Barry and I send our deepest condolences to Brent McGrath and all the connections to this wonderful horse. He will be greatly missed but will never be forgotten.

I had the honor of watching

I had the honor of watching him race, him gnawing playfully at my coat in the paddock..
I was hoping for a recovery but it was not to be. One of the greatest Canadian champions of all time to be sure! Run free across the Rainbow Bridge sweet Beach!

Im sickened by this news. I

Im sickened by this news. I feel so empty right now

requiescat in pace to one of

requiescat in pace to one of the greatest racehorses and sires of all time.

I just saw the news and am

I just saw the news and am deeply saddened by the passing of SOMEBEACHSOMEWHERE. My condolences to all who knew and loved him. A tragic loss for harness racing.

Stunning and sad. Being a

Stunning and sad. Being a local Truro boy and following this horse with such pride all these years as he turned out to be such a perfect sire as well hits hard. I express deepest sympathy to all the local ownership group and will be hearing more about this soon enough. There are generally not as many things to see as top news stories during the off season winter time, but getting great news of Foiled Again's 99 career win and then have it follow up later in the day with this is really devastating. It's early in the year and we have no idea what the year has to offer but I will be shocked if it is not in top 3 Standardbred Canada news stories at year end and not at all surprised for 2018 news story of year.

A perfect legend right at the very top of any greatest poll.
His legacy and memories will carry on forever, and as fans we are so lucky with today's technology to be able to watch his races over and over again. I watch his replays all the time.
I love the video setup and display that Mohawk has of this great horse for fans.

Just saw the news. Very sad! He was a great race horse, and a SUPER SIRE! He will be missed!

To Mr. McGrath and all the

To Mr. McGrath and all the Connections. My deepest Condolences. SBSW to me was the greatest Pacer that was ever hooked up to a sulky and I saw most of the great ones over the Last 45 years . Being a transplanted Maritimer on the West Coast I followed SBSW from his first start in Ont. I was fortunate to be at Mohawk screaming for the Beach down the lane at North America Cup. His legend will be lived forever in the blood of his offspring and the minds of Thousands of fans . I hope you may be so fortunate to have another great one.

Shocked and saddened at his

Shocked and saddened at his passing. Even sadder listening to the video of Sam McKee calling his race at the Red Mile. Wishing the hearts of those directly involved with him peace.

Gone far too soon. Cancer is

Gone far too soon. Cancer is evil. Sincerest condolences to everyone connected with this wonderful champion.

Very sad news. Beach Was the

Very sad news. Beach Was the greatest pacer I've ever seen. Harness Racing lost a legend today. My condolences to all the connections. RIP Champ

It was an honour to watch The

It was an honour to watch The Beach on the track. It was a thrill to meet him at Hanover Shoe Farm in his second year of standing stud and to meet some of his babies. He was, without a doubt, the most spectacular race horse that many of us have ever watched on the track. My sincere condolences to everyone at Hanover Shoe Farm, Brent McGrath and partners and to all of his connections over the years including all of his many fans whose privilege it was to share just a wee bit of this amazing horse. RIP Beach.

I cannot believe this news I am so so sorry. Beach was probably the greatest horse
I have ever had the chance to get up and close to.

RIP. Saw him at Grand River

RIP. Saw him at Grand River when he was 2. Something I'll never forget. His time with us was to short.

All who ever saw or ever had

All who ever saw or ever had anything to do with him were enriched by the experience.
His kind only appears once in a generation, if that often.
I for one will never see his like again.

I cannot believe this. My

I cannot believe this. My heart is broken into a million pieces. What a great horse and what a legacy. So tragic and too young :( RIP boy and condolences to all of us who followed and loved you

So sorry to hear this.

So sorry to hear this. Condolences to all the people connected to this great horse. He truly was an amazing athlete, and will never be forgotten.