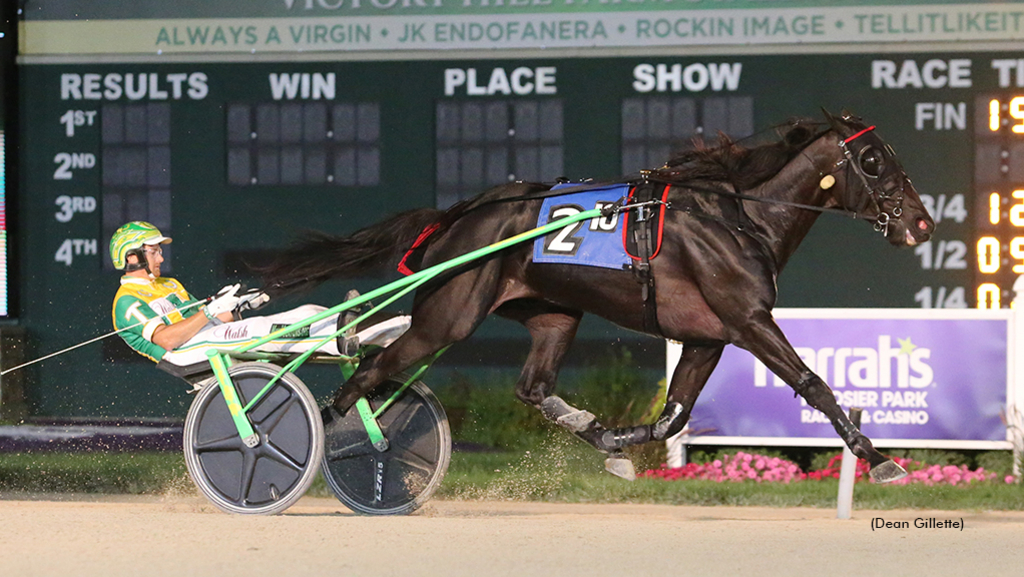 Indiana’s top three-year-old trotters and pacers were back in action at Harrah’s Hoosier Park Racing & Casino as the track played host to a special Labor Day card of live racing on Monday, Sept. 5. Six divisions of Indiana Sires Stakes were featured on the evening’s 14-race card. Three-year-old trotting sensations Ponda Adventure and M Ms Dream both extended their win streaks to remain undefeated this season.

With an eight-race win streak on the line, Ponda Adventure (pictured above) looked every bit the part of a 1-5 favourite as he went gate to wire in the first $48,000 Indiana Sires Stakes division for three-year-old trotting colts and geldings. With regular pilot Trace Tetrick in the bike, Ponda Adventure went to the front and then simply coasted to the finish line to stop the timer in 1:53.

Trained by Erv Miller, Ponda Adventure notched his ninth win of the season from nine starts. Owned by Engel Stable, Louis Willinger and Jerry Graham, the gelded son of Swan For All-Wildflower pushed his seasonal earnings over the $200,000 mark with the victory. Ponda Adventure has now won 17 of 19 lifetime starts and $477,912 in lifetime purse earnings.

Trained by Jamie Macomber, the son of Dover Dan-Keystone Sadie has now won 10 of 17 lifetime starts. The win was the second of the season from eight starts for Dover In Motion.

Not to be outdone by male counterparts, M Ms Dream turned an impressive performance of her own to capture the $92,500 Indiana Sires Stakes for three-year-old trotting fillies in 1:53.1. Opting for a trip off the pace this week, M Ms Dream found a :27 final quarter to get up in the final strides and put a nose in front of the hard-charging Fleurie and Michael Oosting. 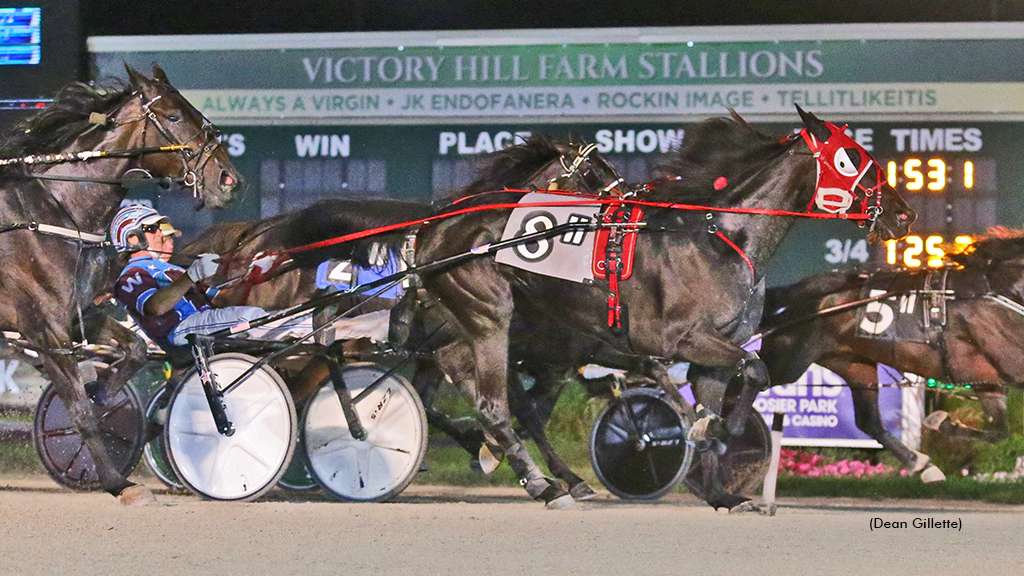 With the victory, the daughter of Swan For All-Trading Places  has now won seven of seven starts this season and 13 of 15 lifetime starts. M Ms Dream is trained by Henry Graber Jr. and owned in partnership by Eleven Star Stables, Frank Baldachino and Hillside Stables.

In the $97,000 three-year-old pacing colt division, Rip Wheeler followed suit and extended a win streak of his own with Brandon Bates in the bike. Scoring his third straight victory, Rip Wheeler used a :25.1 closing quarter to track down Sure Thing Herman and Atlee Bender. Soaring Now and Joey Putnam also rallied well late but were forced to settle for second place honours.

Trained by Walter Haynes Jr. and owned in partnership by Jeff Fought Racing and David Fought, the gelded son of Rockin Image-Novascotia Haover recorded his seventh win from 16 starts this season. Rip Wheeler has now seven of 18 lifetime starts while earning $186,749 lifetime.

The three-year-old pacing fillies rounded out the stakes action on the card and it was Best Place To Be and Marvelous Marshia who found the winner’s circle in their respective divisions.

Best Place To Be left alertly from post nine and held off all challengers to win in 1:51. With driver Sam Widger in the sulky, Best Place To Be was a near two-length winner over JJ Endofanera and Trace Tetrick.

Trained by Mike Roth, Best Place To Be has now won three of 10 seasonal starts. The daughter of Always A Virgin-Best Place is owned in partnership by William Rufenacht and Dm Stables LLC.

The biggest upset of the evening came when Marvelous Marshia and John DeLong captured the second division for three-year-old pacing fillies. Using a very well-timed rally, Marvelous Marshia tracked down the heavily favoured JKs Rollin Baby and Michael Oosting late in the lane to score in 1:50.2.

Trained by Roger Welch, the daughter of Always A Virgin-Honeys Luck recorded her fourth win of the season from 10 trips behind the gate. Marvelous Marshia has now won seven of 20 lifetime starts. She is owned by William C. De Long, William P. De Long, Mia Delong and Marsha Lewisveitia.

Live harness racing will continue at Harrah’s Hoosier Park on Wednesday, Sept. 7 with a 14-race card.