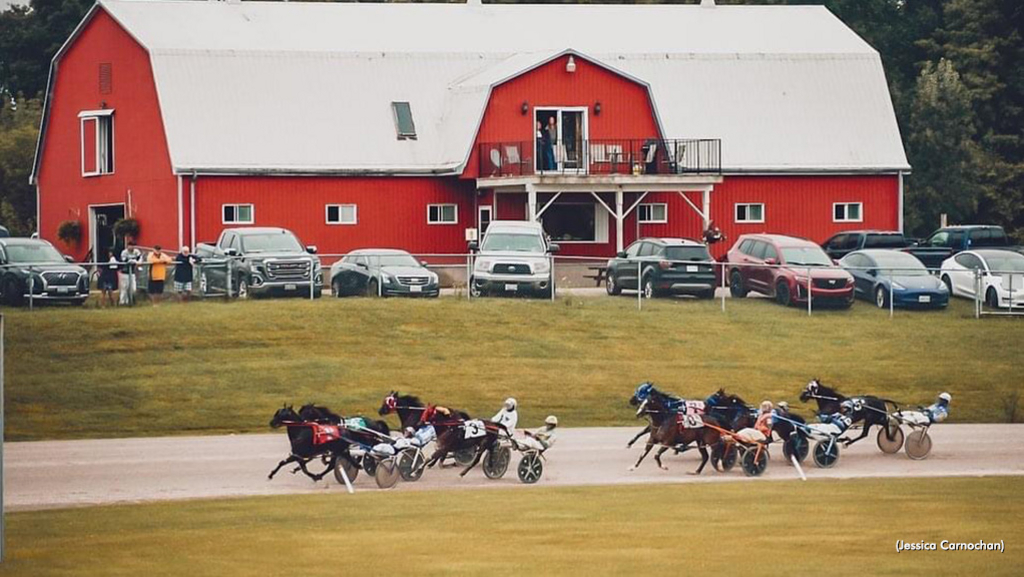 Harris captured one of the seven challenge races and finished in the top three five additional times to finish with 149 points, one point ahead of Doug McNair and seven points ahead of Canada’s leading driver James MacDonald, whom had 148 and 142 points respectively.

Drivers Challenge participant Travis Henry walked away with the track’s driver title, winning one race to increase his total to 24 for the meet and secure the trophy. Tyler Moore was second best, trailing by five wins at the conclusion of the meet.

The trainer dash title came down to the final day with Mike Horner holding on by one win to secure his first Clinton Raceway Trainers’ title. Horner’s trainees visited the winner’s circle eight times throughout the season, earning north of $30,000.

Despite less than ideal weather conditions, a large crowd gathered on-track in support of closing day and the Clinton Royal Canadian legion. Over $11,000 was raised throughout the day for the local legion branch. After the dust settled for the 42nd Annual Charity Drivers Challenge, the two-year-old pacing colts and geldings hit the track for four divisions of Ontario Sires Stakes Grassroots action.

Twin B Risenshine went wire-to-wire in the first Grassroots division. Driver Travis Henry piloted the Francis Dumouchel pupil through splits of :30.1, 1:01.2 and 1:31.1 to withstand a first-over challenge from Hes A Sweetheart, and then hold off a late surge from pocket-popper Better Option by a head in 2:00.4. The Sunshine Beach colt competes for owners Kingston Henry, Ecurie CSL, O A S 2022 and Gaston Bibeau. He paid $4.90 to win.

Driver Jody Jamieson stole the show in the next Grassroots split with Meg Crone trainee The Golden Jet, who ripped a 1:57.4 mile to win going pillar to post by 11-1/2 lengths. The Shadow Play colt sped through a clip of :29.1, :59.2 and 1:28.3 to best Best Shadow with Big Dream Fella closing for third. Claude Gendreau Stable Inc. owns the colt who returned $8.80 to win.

The Bettors Delight gelding Sounds Good followed suit with the previous winners and landed on the point to take the third Grassroots division in 1:59.1. Steered by Doug McNair for trainer Gregg McNair, Sounds Good cleared control past a :30.1 first quarter and endured a first-over challenge from Watchmaker through a 1:02.1 half and three-quarters in 1:30.4. Watchmaker never saw a pylon through the mile and faltered into the stretch, leaving Sounds Good four lengths in front. Michael and Sam Sergi own the gelding who paid $2.80 to win.

Sunday's racing wrapped with Shadows Terror taking the top and holding firm to win the last Grassroots division in 1:59.1. Chris Christoforou piloted the colt to the lead in :29.4 and cruised through a 1:00.4 half and three-quarters in 1:30.3 to then thwart the pocket pop of Teen Tattler by a neck under the wire. Dr. Ian Moore trains and co-owns the son of Shadow Play with R G McGroup Ltd., Serge Savard and Frank Cannon. He paid $5.80 to win.

The racecard was well supported by horseplayers with the total handle reaching $89,784. The closing day handle pushed Clinton Raceway over 1 million dollars in all-sources handle for the season.

Clinton Raceway looks ahead to the 2023 season and fans can look forward to a new grandstand that will begin construction in the near future.

(with files from Clinton Raceway)