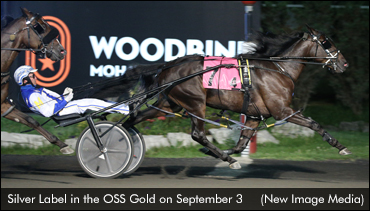 “Trust me, I’m really enjoying it. I hope you call me another million times,” said Stouffville, Ont. resident Millar. “It’s kind of tough going into these races when both of them are undefeated, because you know at any time any horse can get beat, but it’s nice to see them keeping up the streak.”

Silver Label kicked things off for the Millar Farms team, storming to the front from post seven and leading the field of seven through fractions of :27, :56.1 and 1:24.2. Balance and I Love Ongait tried to reel in the fan favourite in the stretch, but Silver Label swept under the wire one length ahead of the challengers in a personal-best 1:51.4.

“As a breeder, I see her cross the finish line and I’m happy to win the $50,000, but I’m also happy to see her take a mark of 1:51 and change knowing that in a few years she’ll be in the broodmare band, popping up some babies for me,” said Millar, who also bred and raced Silver Label’s dam Hidden Gem.

The win was Silver Label’s fifth straight. The Bettors Delight daughter opened her season with a victory in the July 6 Grassroots event at Georgian Downs and followed that up with wins in the July 18 Gold Series leg at Georgian Downs, an August 2 overnight event and the August 17 Gold event, both at Woodbine Mohawk Park. 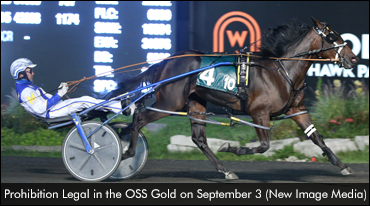 Stablemate Prohibition Legal had recorded wins in all three Gold events and her August 28 Eternal Camnation division heading into Friday’s test, and she cruised to her fifth straight victory with a 1:52.4 front-end effort from post four. Fade Out and Cheryls Shadow were 2-1/2 lengths behind the favourite in second and third.

Prohibition Legal had been sidelined mid-summer following a bout of colic and Millar is hoping the daughter of Big Jim and Catch A Wish continues to get stronger heading into the remaining events on her calendar, which include the Shes A Great Lady, with eliminations on September 18 and the final on September 25, the last Gold Series event on October 2 and the October 16 Super Final, all at Woodbine Mohawk Park.

“This is the first week I think he (Gallucci) actually got a decent mile into her,” said Millar. “They’re tough races coming up, that’s for sure, but I said to my wife tonight, this is unbelievable to have two nice fillies like this in one class and have the bigger races coming up in September, and thinking wow, there’s going to be a lot better horses come up here to race against from the Grand Circuit, but you’re still going to have a shot, have a chance, which is nice. That’s all you can ask for.”

Although eligible to the September 11 Champlain Stakes, Millar said Prohibition Legal will likely skip that event in favour of the Shes A Great Lady. Silver Label’s only Grand Circuit engagement is the Champlain Stakes, so she will carry the Millar Farms banner in that event provided she remains happy and healthy through the next week.

The stablemates sit first and second in the two-year-old pacing filly Gold Series standings. Prohibition Legal has earned 200 points and Silver Label has 150 -- 50 points ahead of third-ranked Fade Out.

On Saturday night, the two-year-old pacing colts will kick off an outstanding evening of Grand Circuit competition at Woodbine Mohawk Park with a pair of $100,000 Gold Series divisions. The Gold Series colts are featured in Races 1 and 2, and will be followed by eliminations for the Goodtimes, Fan Hanover and Pepsi North America Cup and the Roses Are Red, Maple Leaf Trot and Canadian Pacing Derby finals.