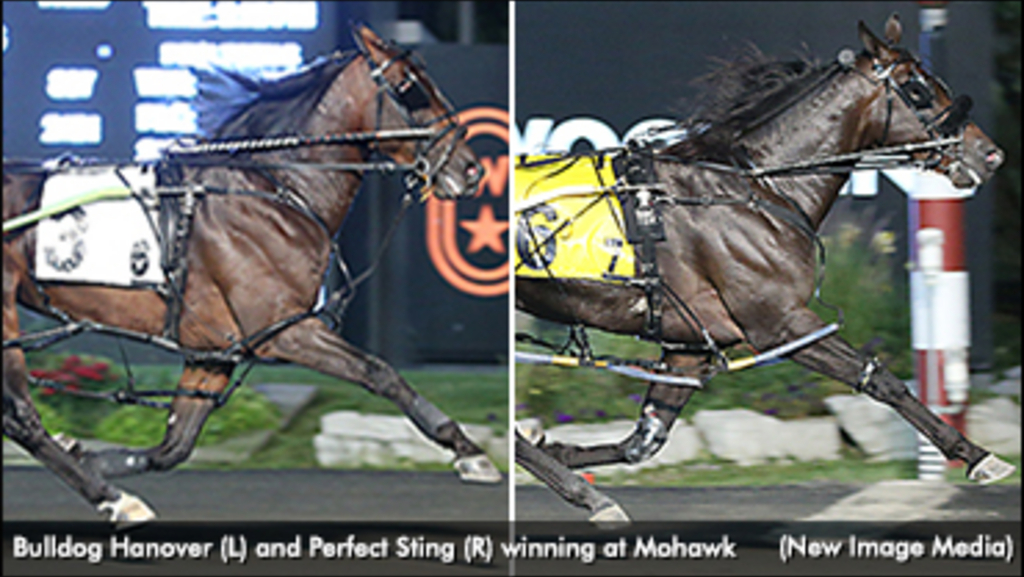 The eliminations for the 38th Pepsi North America Cup are in the books, with Bulldog Hanover and Perfect Sting emerging top of the flock on Saturday (Sept. 4) at Woodbine Mohawk Park heading to the $1 million final next week.

Rockyroad Hanover rolled to the top heading to a :27.3 first quarter as Southwind Gendry readied then halted a first-over move from fourth. Bulldog Hanover sat fifth into the backside, but with the pace slow up the backside driver Jody Jamieson hustled the Shadow Play colt for the front approaching a :56.3 half.

“When I called on him at the head of the lane, he kicked into another gear again. I don’t even know what gear it was; he’s just an amazing horse. I didn’t expect the race to go like that, nor did I expect it to go that slow. But he just overcame a bad trip and a bad drive I guess. That’s just the things that great horses do and he’s a great horse. I think he might be the best horse I’ve ever driven, and I don’t say that lightly”

Co-owned by trainer Jack Darling through his Jack Darling Stables Ltd. along with Brad Grant, Bulldog Hanover won his sixth race from eight starts this season and his 10th from 14 overall, earning $577,811. He paid $2.60 to win.

Whichwaytothebeach headed Perfect Sting off the turn and maintained control to the eighth pole, where Perfect Sting held his ground to the pylons and fought back for the front. The resurgent colt by Always B Miki then edged away from Whichwaytothebeach nearing the line with Abuckabett Hanover closing for third. Simon Says Hanover and Jimmy Connor B rounded the finalists.

“He had not [fought back] since he raced the older horses,” trainer Joe Holloway said after the race. “He dug deep that night, and then he’s just been there. Nobody’s gone tougher trips; he’s been consistent – I think we’ve gotten beat a total of about 12 feet. But he just let’s them get by. But tonight, he dug back in. David and I talked about it, and we made a bridle change and we had some earplugs in the holes in the bridle and pulled it out when Sylvain [Filion and Whichwaytothebeach] was next to him. I think that helped. [Dave] said ‘I think he likes that; I think he’s back.’ It’s tough to say he’s not there, but he’s hit the board in every start, he’s second in [1:]48 at Pocono, he’s cut quarters in :25.1, but he’s not been himself.”

Winning his fourth race from nine starts this season and his 14th from 19 overall, Perfect Sting surpassed $1 million in earnings with the victory. Farms LLC and Val D’Or Farms own the $3.00 winner.