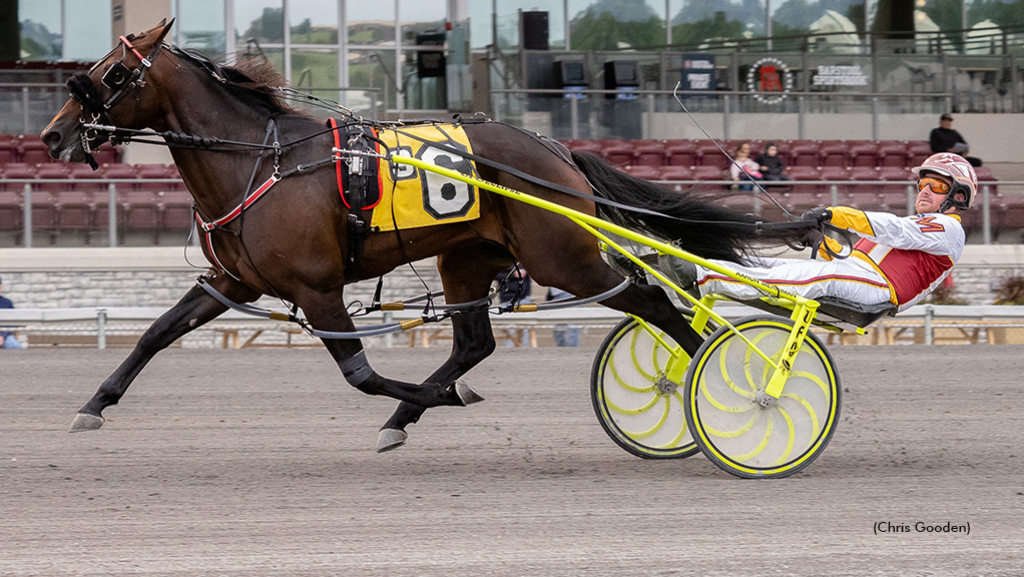 Pennsylvania champion Fulton became the fastest two-year-old ever at Hollywood Casino at The Meadows when he steamed to a 1:49.4 victory in Friday’s $82,500 Keystone Classic. Lyons Stealth sprang a 7-1 upset in the other division of the stakes for freshman colt and gelding pacers.

It figured to be a soft spot for Fulton; his bankroll was nearly 10 times that of his closest rival. But Linda Toscano, who trains the son of Heston Blue Chip-Bettor Be Steamin, advised winning driver Aaron Merriman not to adopt that mindset.

“I’ve driven horses for Linda over the years and she usually has no advice about them,” he said. “But she phoned me and told me last week he went slower fractions and about got himself beat. She told me to let him go where he was comfortable and not go cheap fractions. He’s way better not doing that. And she was correct.”

So even as Fulton widened his lead late, Merriman tapped the sulky once to keep him on task. The result: Fulton knocked a tick from the mark Huntsville established in 2016. He also erased the stakes record of 1:51.1 held jointly by Dragon Eddy and Southwind Gendry.

Lou On The Beach was 7-1/4 lengths back in second, with Lite N Sweet third.

Bettors installed Annapolis Hanover, runner-up in the PASS championship, as the prohibitive 2-5 favourite in his division, and Hunter Myers, aboard Lyons Stealth, indicated he wouldn’t have disagreed with them.

“I was hoping to stay as close as I could and hope for a decent cheque,” said Myers. “I didn’t think he would be blowing by like that.”

Thus, Myers kept the son of Sweet Lou-Zane Hanover up close in third and when the field turned for home, he had little trouble zooming by Annapolis Hanover by 1-1/2 lengths in a career-best 1:51.2. Mayweather Hanover completed the ticket.

“Soarin’” Lauren Harmon hadn’t sat behind Macho Martini before and so didn’t know what to expect when she sent him first over after the lead. But he responded willingly, and the pair rolled home to victory in Friday’s $9,000 leg of the Great Lakes Amateur Driving Association (GLADA) Trot.

Thestable Machomartini, one of MacDonald’s fractional ownership groups, acquired the four-year-old son of Muscle Mass-Peach Martini earlier this week before sending him to trainer Twaddle. In that situation, what was Harmon’s approach?

“I try to just listen to the trainer,” said Harmon, who last week won a pair of amateur events at the Delaware County Fair. “Anthony gave me some advice, although he’s never driven the horse either. I just tried to see what the horse wanted to do and went from there.”