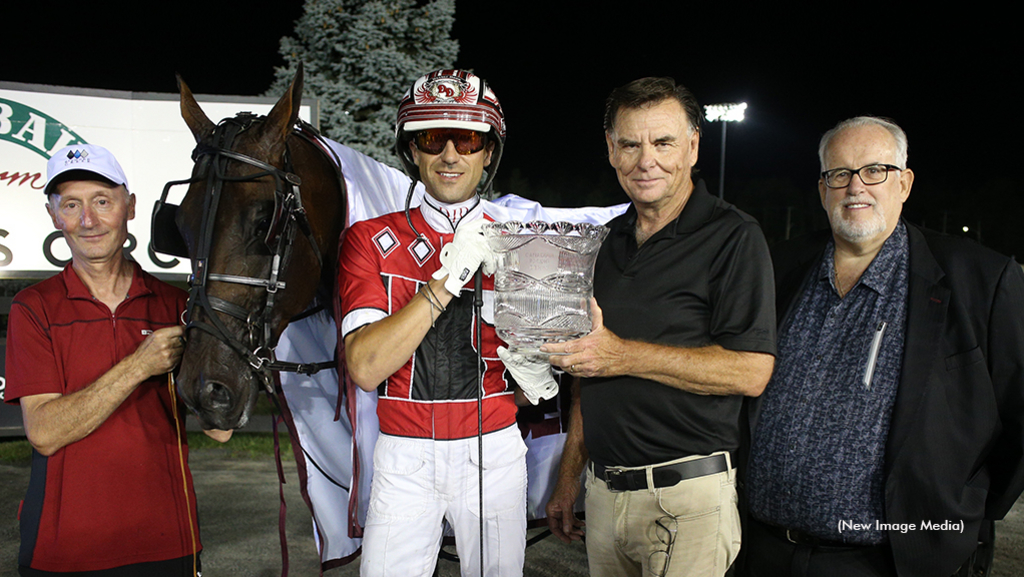 Jack Darling is trying to soak up every moment with harness racing’s all-time fastest performer, Bulldog Hanover, but despite the horse’s multiple-record miles and 10-race win streak, it’s still not always easy for his co-owner and trainer.

“I’m trying to enjoy it, but no matter how many times he does it, as an owner/trainer you’re still sweating it out,” said Darling, who shares ownership of Bulldog Hanover with Brad Grant. “I trust the horse, and I trust my driver (Dexter Dunn), but I’m a little leery about the horse racing gods sometimes.”

Bulldog Hanover, the unanimous No. 1-ranked horse in the sport’s weekly poll, is the 3-5 morning-line favourite in Saturday’s (Oct. 1) $250,000 Dayton Derby for older male pacers at Hollywood Dayton Raceway. The four-year-old stallion is coming off a track-record 1:46.3 victory in the Harrah’s Hoosier Park Pacing Derby last week. The time chopped four-fifths of a second off the previous quickest mile ever at Hoosier.

It also gave Bulldog Hanover four of the eight-fastest wins in harness racing history: 1:45.4 — the all-time record set July 16 at The Meadowlands — as well as 1:46 and 1:46.1. Throw in his 1:46.4 triumph at Woodbine Mohawk Park on Sept. 3 that is the fastest-ever mile on Canadian soil, and Bulldog Hanover has logged five sub-1:47 victories in his past seven starts.

Thirteen other horses in history have won a race with a time faster than 1:47. None have done it more than once.

For the season, Bulldog Hanover has won 11 of 12 starts and earned $1.12 million. Along the way, he has attracted a huge following, which figures to continue Saturday at Dayton Raceway.

“It is nice to see the fans come out and cheer for him,” Darling said. “That’s special.”

Darling purchased Bulldog Hanover, a son of Shadow Play out of BJs Squall, for $28,000 at the 2019 Standardbred Horse Sale. His family includes millionaires Betterthancheddar, an O’Brien Award winner, and Courtly Choice.

Bulldog Hanover was an O'Brien Award finalist at both two and three, Ontario Sires Stakes champion at age two and the runner-up last season. He finished 2021 with a four-race win streak, including a pair of Grand Circuit triumphs at Hoosier, giving him 15 victories in his past 16 starts.

“He was always a special horse to me,” Darling said. “As a two-year-old and as a three-year-old he went some fantastic miles. Because of the pandemic and because he was Ontario-sired, he didn’t really get to the States to race much (on the Grand Circuit). It was just kind of the way it worked out.

“This year, he’s been really able to show what he can do.”

Bulldog Hanover has shown what he can do in more ways than one. In addition to racing, he bred 79 mares this year.

“As he was doing it, it didn’t bother him,” Darling said. “The first day he went to breed the mares, when he came back to the training center, he acted very strange on the track. He just kind of lost his mind for a little bit, wondering what the heck was going on. But after that, he was a professional. He was just a perfect gentleman. He’s got great manners for a stallion.”

Bulldog Hanover heads to Dayton off a win that Darling said “might have been his most impressive.” Bulldog Hanover won the Hoosier Park Pacing Derby by six lengths and his 1:46.3 mile was two-and-three-fifths faster than any race that night.

“Obviously, he’s been impressive every start, but for some reason I just thought that might have been his most impressive,” Darling said. “He’s always strong at the wire, but just the way he opened up on them the last eighth of a mile, even then he was going into a different gear.

“I didn’t think the track was lightning fast that night. So, it was a pretty big mile.”

He might need another big mile Saturday. The Dayton Derby features five other horses with more than $1 million in lifetime earnings — This Is The Plan, Workin Ona Mystery, Catch The Fire, Allywag Hanover, and Charlie May.

Catch The Fire and Allywag Hanover also are members of the sub-1:47 club.

Bulldog Hanover will start the Dayton Derby from post eight. Allywag Hanover, the 7-2 second choice, leaves from post seven while Charlie May, who is 9-2, starts from post nine. Catch The Fire, who goes from post six, is 8-1 in his second race following a seven-week layoff.

“There are a lot of good horses and a lot of speed,” Darling said. “It will be interesting, that’s for sure.”

The all-time fastest pacing mile on a five-eighths track, like Dayton, is 1:47. The mark is shared by Always B Miki, who did it three times in 2016, and Sweet Lou, who first set the record in 2014.

Following the Dayton Derby, the remainder of Bulldog Hanover’s schedule has him slated to go to the Allerage Open Pace at Lexington’s Red Mile, the Breeders Crown at Woodbine Mohawk Park, and the TVG Series Open Pace championship at The Meadowlands. And while winning is the priority, Darling admitted he would like to see if Bulldog Hanover can lower his 1:45.4 world record.

“Probably our only chance will be at Lexington,” Darling said. “If you get decent weather and a good track, I’d just like to see what he could do. He always leads you to believe that there is more in the tank. It would be nice to see it. It will be exciting.”

Standardbred Canada will carry a live stream of the Saturday card from Dayton on the SC website, starting at 6:30 p.m. The coverage will be presented by the Ohio Harness Horsemen’s Association (OHHA) and the Galbreath Equine Center at The Ohio State University Veterinary Medical Center, and hosted by OHHA Outreach and Public Relations Coordinator Frank Fraas with Little Brown Jug Publicity Director Jay Wolf. Coverage will include the eight $300,000 finals for two-and-three-year-old filly and colt trotters and pacers and the four $250,000 Dayton Derbies.

To Mr. Darling and Mr. Grant

Gentlemen, you own an amazing horse - I don't think that any other horse in history has ever won 10 consecutive races in sub-1:50, as Bulldog Hanover has done. Every time that he races, he draws more fans to the track to watch him than he did in his previous race. TDS, Wiggle It Jiggleit, and Foiled Again (at age 14) were never nearly as popular as Bulldog presently is; in fact, he might be the most popular standardbred since Dan Patch. The first major stakes race in 2023 on a track larger than a half-mile will likely be The Mohawk Gold Cup, which won't be raced until mid-June. The breeding season will be long over with by then, so Bulldog could both breed and race again next year, and should that occur, it would be the best thing that happened to harness racing in ages. I think I can speak for thousands of other harness racing fans when I ask you to please bring Bulldog back to the track again in 2023.