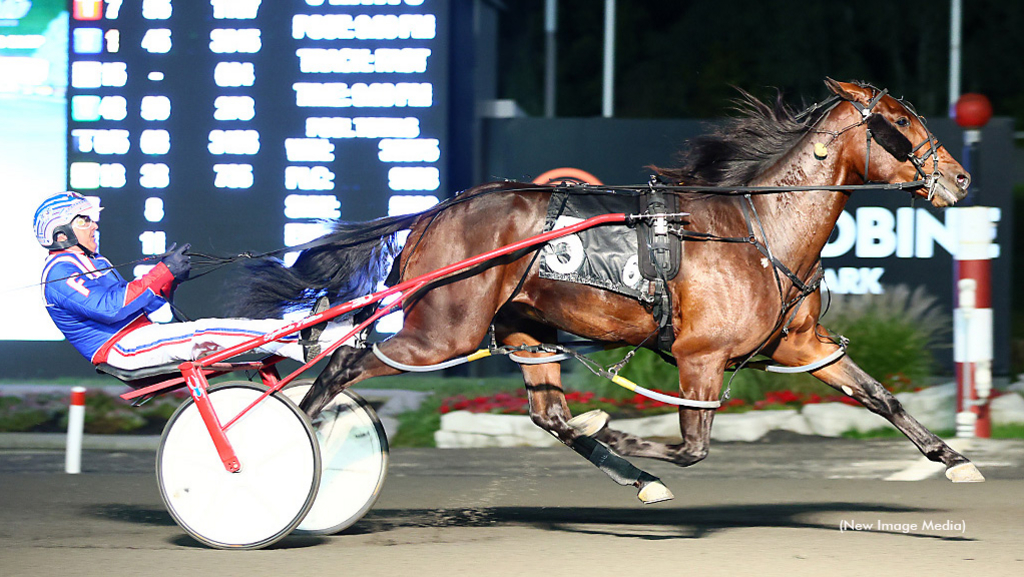 The Glamour Boys wrapped up their Ontario Sires Stakes Gold season on Friday night at Woodbine Mohawk Park with Cold Creek Queso punching his return ticket to the Milton oval for the Super Final on Oct. 15 with an impressive three-length win in a $100,400 division.

Sitting 11th in the season-long standings heading into the night, the Betterthancheddar gelding need a strong performance to qualify for the Super Final. He responded with a lifetime-best performance in 1:48.3, a new OSS record for pacing geldings, to jump inside the top 10.

Driver Sylvain Filion tried to make his way to the front with Cold Creek Queso from post five as the field of six left the gate in race six, however, Jody Jamieson and Southside Eddy were more intent on assuming the lead, so the Milton, Ont. resident settled into the pocket position.

“When I saw Jody’s horse revved up, I knew he was going to go a good clip, so I just tucked in and followed him until the top of the stretch,” said Filion.

His instinct was correct. Southside Eddy led the field through panels of :25.2, :53.3 and 1:21.2 before Filion angled out entering the stretch and the Murray Brethour-trained Cold Creek Queso flew home for the win.

“I know both horses and I knew [Southside Eddy] was going to take me a long ways because he’s a very fast horse,” said Filion. “I was just hoping he’d get a little bit tired, which he did.”

The other $101,300 OSS Gold division went in race three and St Lads Sterling finished his Gold season the way he started, with a win.

Leaving from post six, Louis-Philippe Roy sent the grey Control The Moment colt to the front and led the field through a blistering first panel of :25.4. Shortly after entering the backstretch, James MacDonald was forced to send the 3-5 favoured pocket-sitter, Kolby Two Step, past him.

“James was trying at some point just to relax his horse and stay on my back,” said Roy. “I felt like he was going to run over me and he had no choice there. The horse was dictating more what he wanted to do than James was. For sure for me it worked good that way.”

MacDonald and Kolby Two Step marched the field through middle panels of :54.2 and 1:22.2, but were unable to hold on as St Lads Sterling and Roy found racing room up the inside in the stretch and drove home to win by 1-1/2 lengths in a career-best 1:49.3. Sport Secret (Doug McNair) and Ron (Phil Hudon) finished second and third, with Kolby Two Step fourth.

Roy has driven St Lads Sterling for 15 of his 16 starts this season and felt it was time for the grey colt’s luck to change.

“Since the start of the season, I feel like he was good, but like I was saying, in the trip we would get second over then they were flying home or things like this,” said the Mississauga, Ont. resident. “You look at the lines, he never really raced bad, coming home fast quarters and just beat two lengths or stuff like this. I feel like tonight, the luck was just on his side and hopefully it’s going to be the same in the Super Final.”

In other Friday night action, five-year-old Ontario-sired pacing mare Littlebearcat extended her win streak to five while making her Mohawk debut. The daughter of Tigerama entered a $10,000 fillies and mares conditioned pace following four straight wins in the claiming ranks at Flamboro Downs and prevailed by half a length in 1:53.2 for trainer, driver and owner Ryan Desroche of Guelph, Ont. She paid $26.40 for the 12-1 upset.