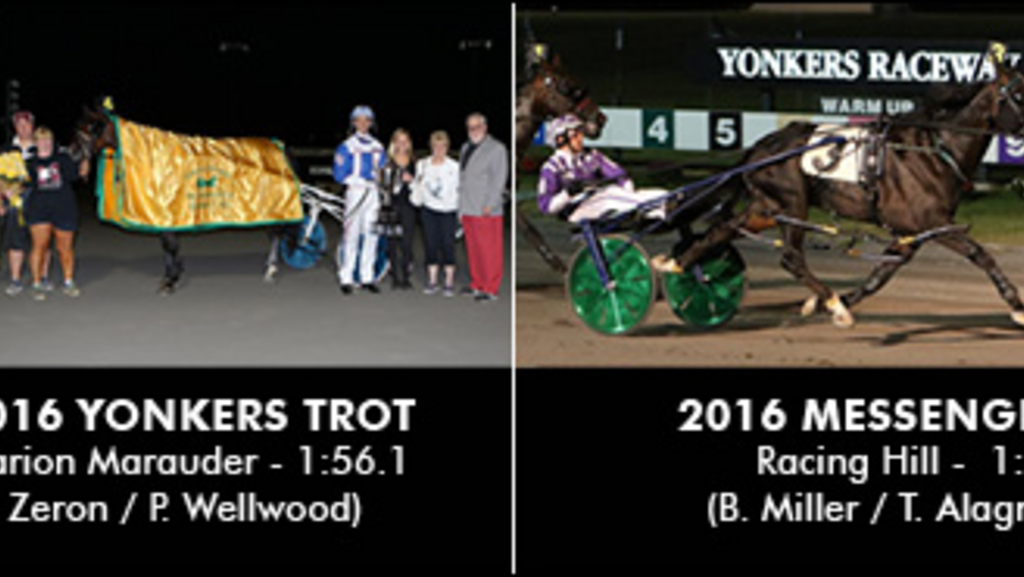 Saturday night's card of harness racing at Yonkers Raceway featured legs of the Triple Crown for pacers and trotters, and Canadian-owned horses emerged victorious from the Yonkers Trot and the Messenger Stakes.

Marion Marauder is showing a penchant for winning big races by just as much as he has to. After capturing the 2016 Hambletonian by a nose, he was victorious in the second leg of trotting's Triple Crown, the 2016 $500,000 Yonkers Trot, by a similar narrow margin.

Driver Scott Zeron got away in third with Marion Marauder as Smalltownthrowdown (Dan Daley) and Cufflink Hanover (Jason Bartlett) were quickest off the gate. Zeron right-lined Marion Marauder as the field hit the backstretch, clearing just past the :29 opening quarter.

The middle half of the mile was all Marion Maruader. No pressure came through a :58.3 half, or a 1:27.4 third panel. Lagerfeld (Mark MacDonald) was on the move from the back of the pack but not a serious threat until the final turn.

"Dan's horse was really impressive and it did turn into just that: an eighth of a mile sprint and we put on a good show! I'm happy I got there by that nose," said Zeron after the win. "It felt similar to last week where I had soft fractions and I just wanted to turn it into that sprint down the lane, and that's the way it happened."

Zeron was asked if Marion Marauder was as strong as the week before in the Yonkers Trot elim.

"Last week we were unchallenged a bit down the lane and he trotted through the wire a little bit stronger but at the same time, he's been racing hard. To come back how he has after that Hambo, hats off to him and to stick his nose out tonight for the win, it was great."

"It's great. I'm just happy to be a part of this horse. And the journey he's on, he's taken me on my own kind of journey so I'm happy. The great horses, they get these victories and I'm just the pilot, I don't have a whole lot to do with it."

Mike Keeling, as part of the husband-wife training tandem, does have a lot to do with it and he's just as thrilled.

"It's been fantastic. He's just a really good horse, and Scott's done a great job and we're having fun with him. Tonight was just another little icing on the cake."

Keeling thought perhaps Marion Marauder had some footing issues that made it appear the horse wasn't as strong as the week prior.

"I thought he looked strong going into the last turn but it looked like maybe he didn't get a hold of the track great in the last turn and he lost a little momentum there. But he's got a lot of grit and it will take a good horse to go by him late."

This year Yonkers announced that the winner of the Yonkers Trot would receive an invite to the $1 million International Trot. Will Marion Marauder's connections accept the invite?

"That's a big stretch for a three-year-old to race against those kinds of aged horses. Those things are a whole different type of animal," stated Keeling. ""We have a plan in place, the Canadian Trotting Classic is really important to us because it's on our home trophy. We want to compete in that and the Breeders Crown. If we put something in the middle, it's going to take a lot of convincing. We're going to talk about it."

Leaving from Post Three, Racing Hill jammed up in fifth early while stablemate Dr J Hanover (Zeron) flashed speed from the outside. That one cleared over rail horse Stonebridge Beach (Dan Dube) and fronted the field through a :27.3 opener. Brett Miller didn't wait and moved Racing Hill from fifth and cleared to the front around the three-eighths mark.

Miller then rated Racing Hill through a :56 half and 1:25 third panel without any threat whatsoever. Down the lane he pulled away from his stablemate and tripped the timer in 1:53. Stonebridge Beach made ground up the passing lane to take second from Dr J Hanover.

The win marked the second straight in the Messenger for trainer Tony Alagna, who won the 2015 edition with Revenge Shark. It's the first Messenger win for owner Tom Hill of Hamilton, Ont. and driver Brett Miller.

"This is a very nice colt. Since the first time I sat behind him as a two-year-old, he's been very professional. He has a great gait to him and he's extremely fast. He's got all the tools."

Miller noted that his best attribute is his manageability.

Racing Hill (Roll With Joe - Chasing Ideals) has yet to miss the board as a sophomore, with a 5-5-1 record from 11 outings and more than $1.26 in earnings from those starts.