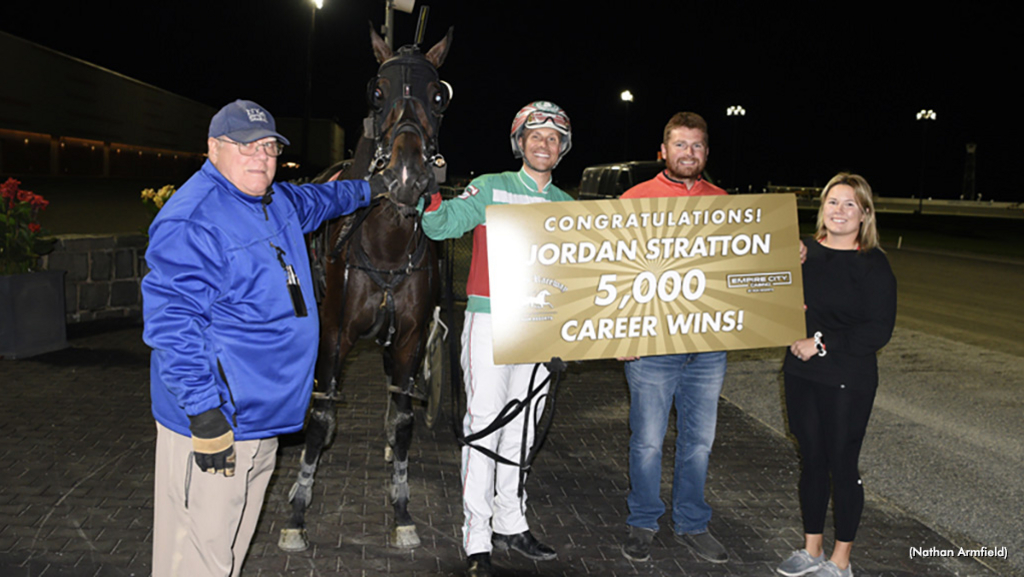 Driver Jordan Stratton won four races on Thursday night (Sept. 29) at Yonkers Raceway, with the third of them representing the 5,000th victory of his career.

Last year’s leading driver at Yonkers, Stratton captured Race 3 with Poppy Drayton N, a nine-year-old Bettors Delight mare, for his brother and trainer Cory in 1:55.1 and then teamed with Dennis Laterza’s E R Hilary, an eight-year-old daughter of Always A Virgin, to take the fourth dash in 1:56.1.

That put Stratton on the verge of his milestone, and he wouldn’t have to wait long. Reachthruthesky AS, a four-year-old McArdle mare, took the sixth race in 1:53.3 to give him No. 5,000. Stratton would then get started on the next thousand by taking the nightcap with Darran Cassar’s Starlit Rambo, a three-year-old Jailhouse Jesse gelding, in 1:56.1.

Stratton is second in the standings this year at Yonkers and during his driving career his charges have earned over $87.2 million.

In other news from the Thursday card, nobody had six-of-six in the Pick 6, resulting in a carryover of $3,463.04 on Friday night’s (Sept. 30) program. A $1 base wager, the Pick 6 begins every night in the third race and has a takeout rate of 20 percent.

Starting next week, Yonkers will switch to a six nights per week schedule, with racing on Monday through Saturday. That format will continue until the week of Oct. 17 when Saturday becomes a dark day and the oval returns to racing on a Monday-Friday basis. Post time is 6:55 p.m. (EDT).