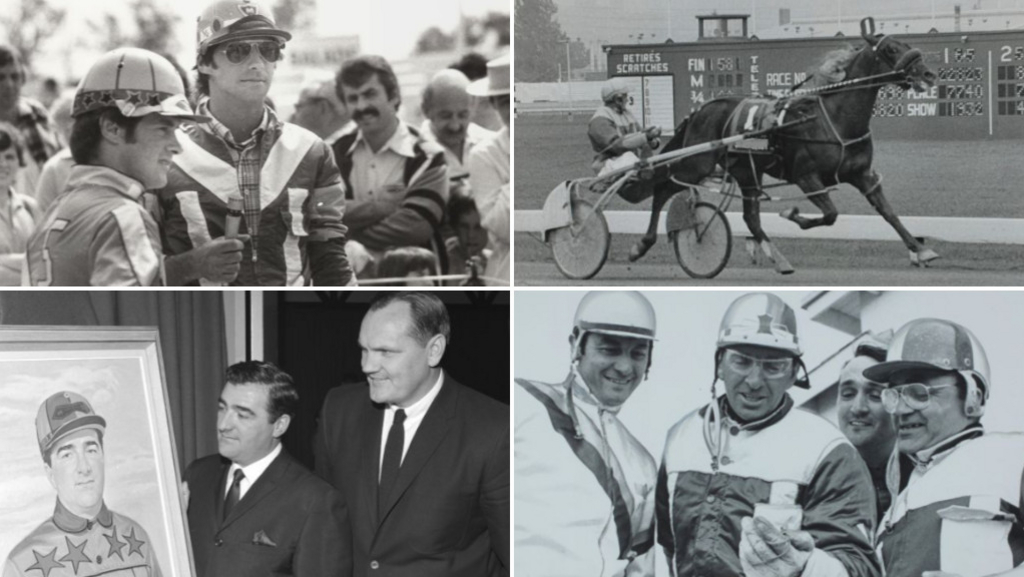 This week's Rewind column is the regular monthly edition of 'Picture Parade.'  As is the custom it has a central theme and all of this week's old pictures are from the once mighty metropolitan  Montreal tracks Blue Bonnets and Richelieu Park.  These two world class tracks played host to numerous great races,  driver competitions and other headline events for many decades.  The job at hand is to identify the personalities in each picture and send along your answer with the corresponding number.  If you just like to look and perhaps reminisce, that works as well. 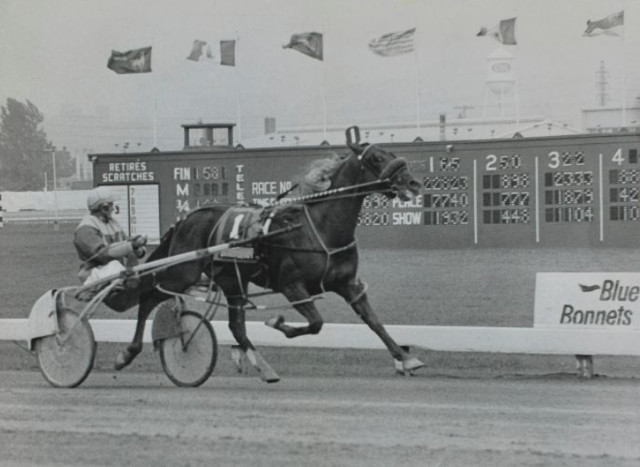 #1 - Let's start with an easy one. In this vintage photo you have to name the driver and the horse. 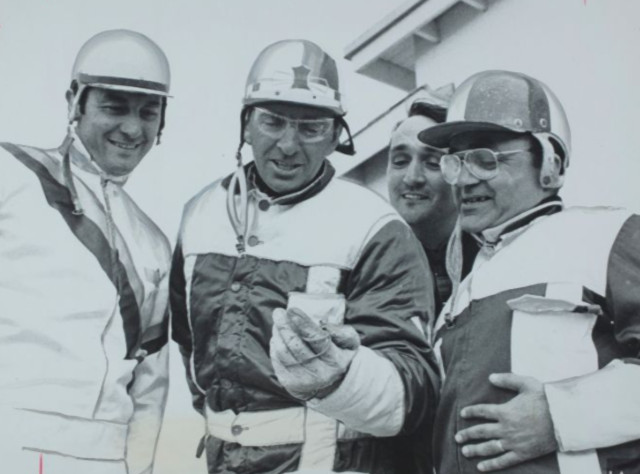 #2 - A visiting driver from Italy Gino Borelli (far left),  in Montreal for a special day,  pauses for a chat and a photo with two Montreal regulars plus a judge standing behind.  If you can name them all or at least the two drivers and let us know. 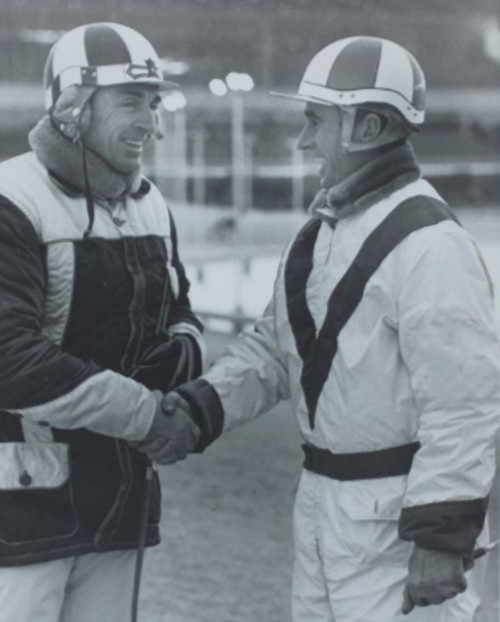 #3 - These two chaps start out the race day with a handshake and a "May the best man win" wish to each other before a Labatts competition. 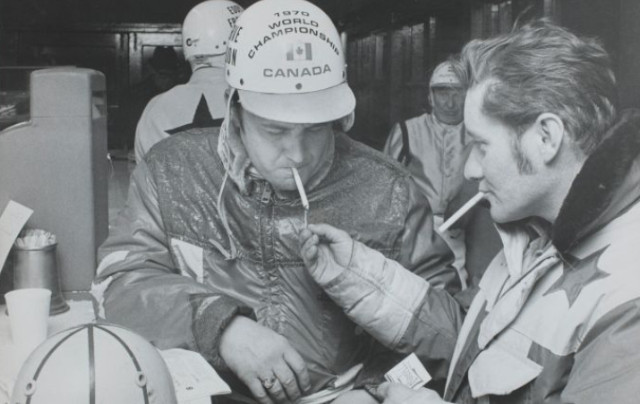 #4 - Long before the "No Smoking" or "Defense de Fumer" rules were in effect these two guys paused to light up. Who are they? 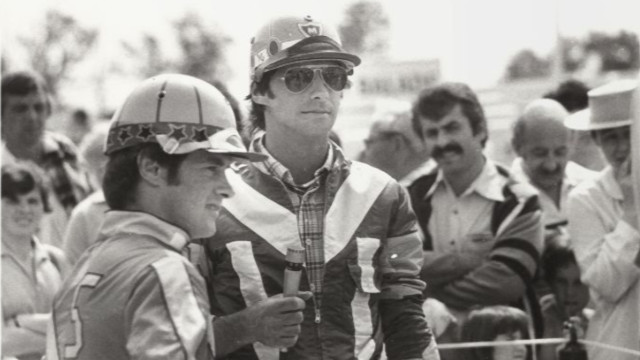 #5 - Who are these two youthful competitors? Tell us who they are. 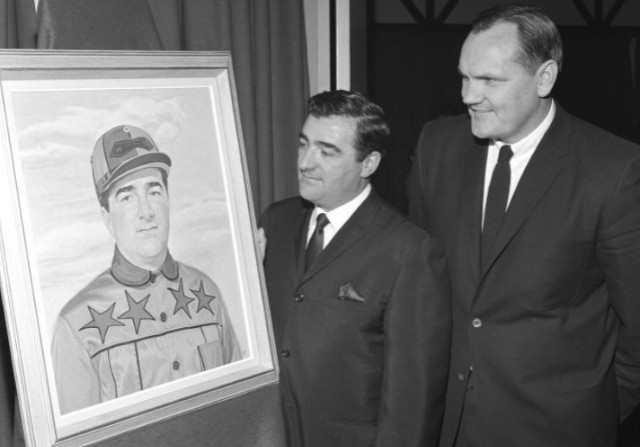 #6 - Looks like the portrait of a driver. Can anyone identify who it might be and also who the two admirers are? 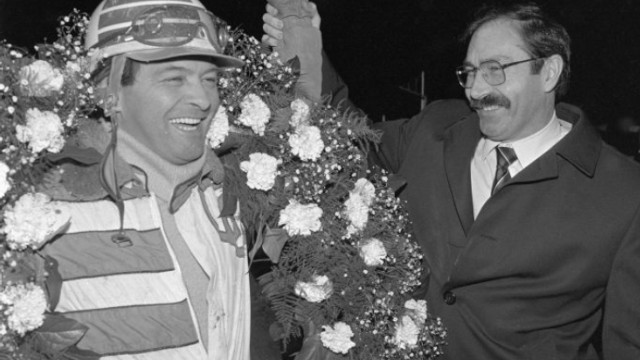 #7 - This fellow on the left was so well known at the Montreal tracks that you can't mistake him, or at least I don't think.

#8 - Anybody back there? This driver appears to be checking for any nearby competitors as he nears the finish line. Can you identify him? 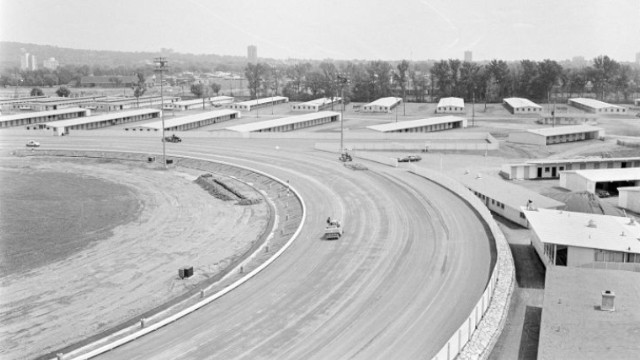 #9 - What track do we have here based on what you see in the background? 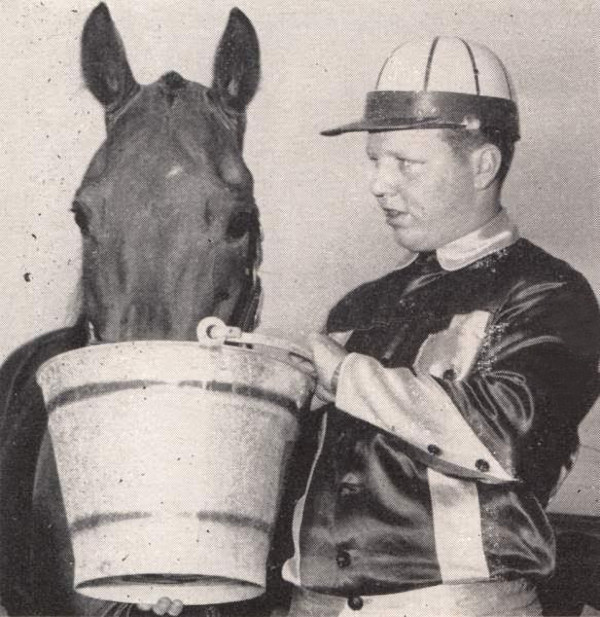 #10 - This very popular driver raced at both of the featured tracks but "loved" Blue Bonnets the most apparently.  (Harness Horse photo) 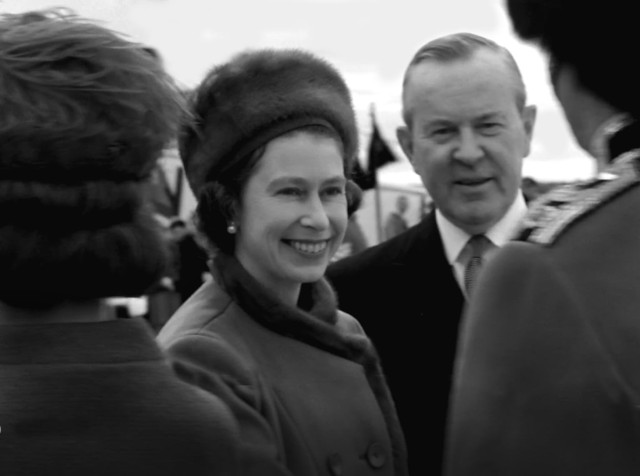 Can you identify these two well-known individuals, neither involved with harness racing, as they paid a visit to Charlottetown, P.E.I. in 1964. This lady was known to have a great love of horses.

Quote For The Week: "It always seems impossible until it's done." - Wisdom of Nelson Mandela

The correct answers to this week's Picture Parade photos are shown below :

# 1 - That was Keith Waples and Strike Out at Blue Bonnets. Thanks to Ron Goddard for pointing out that Keith was wearing the silks of Tom Strauss. I wondered what was happening .
# 2 - L-R -Gino Borelli from Italy , Roger White , Albert Hanna and the paddock judge looking on was Gilbert Bolan.
# 3 - Roger White and Benoit Cote
# 4 - Herve Filion and Jean Paul Morel
# 5 - Serge Bouvrette and Michel Giguere
# 6 - Portrait was Marcel Dostie and next was the "real" Marcel Dostie , next person I am not sure.
# 7 - Gilles Gendron and Andre Marier
# 8 - Pat Crowe and of course Cam Fella
# 9 - Blue Bonnets backstretch
# 10 - Duncan MacTavish as a 21 year old with the horse Oliver Twist
Special Photo was the recently passed Queen Elizabeth II and former Canadian PM Lester Pearson visiting PEI .
Thanks so much for your responses; they are very important. It takes a long time to gather all these pictures and I hope you enjoy seeing them as a glimpse of the past.

I’m surprised that no one knew that along with Elizabeth was Lester Pearson.

# 2 is Roger White and Albert Hanna
# 5 is Michel Giguere
# 7 is Gilles Gendron and the President of Blue Bonnets , Andre Marier
# 10 is Duncan MacTavish and his horse Oliver Twist
Special Photo is Queen Elizabeth and Prime Minister Lester B Pearson

Lots of great pictures. BB was a great track. Used to visit it when I went to McGill.
#5 - one of them might be Serge Grise, I think.
The guy with the Queen is Lester Pearson, the Prime Minister of the day.

Number 1 is Keith Waples with Blase Pick or Strike Out. Number 2 In the centre is Roger White the man that bought Silent Majority as a yearly and raced him as a two year old. Roger was killed in an airplane crash in the fall of 1961 going to the Harrisburg sale. On the far right is Albert Hanna the man that could speak 7 languages. Number 3 is Roger White and Ben Cote. Number 5 I am going to J P Morel on the left and Robert Sampson on the right. Number 6 is Marcel Dostie. Number 7 is Gilles Gendron Number 8 is Pat Crowe and Cam Fella Number 9 is Blue Bonnet Raceway. That picture was taken probably around 1960. Number 10 is Duncan McTavish. Special Photo is Queen Elizabeth with the Prime Minister Lester B Pearson . And number 4 is Herve Fillion and Ron Feagan taking a smoke break.