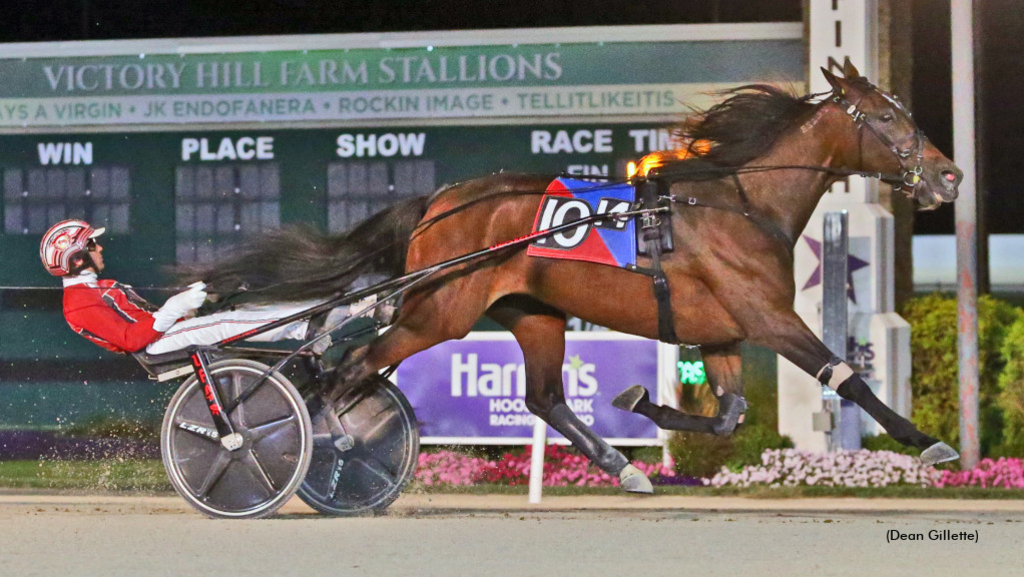 On an evening where it would be a tough act to follow world champion Bulldog Hanover’s scintillating 1:46.3 track record, Bella Bellini did exactly that as she trotted past her nine male rivals to convincingly capture the fifth edition of the $220,000 Caesars Trotting Classic at Harrah’s Hoosier Park in a stakes-equalling effort and track record 1:51.2 from Post 10.

Steered by Dexter Dunn, Bella Bellini was in fifth position for the first quarter-mile as champion Jujubee (Andrew McCarthy) assumed command right as the mile began. After an initial fraction of :27, Cuatro De Julio wrested the lead from Jujubee and established split times of :56 and 1:23.4.

Bella Bellini appeared quite comfortable but was in fifth and despite placing herself in third in the final drive for the wire, it seemed she may have too much work to do. The daughter of Bar Hopping-Bella Dolce, however, was poised to not only catch the leaders but surpass them.

With a powerful turn of foot, last year’s Hambletonian Oaks winner and Dan Patch Award winner kicked away from a surging Forbidden Trade and Its Academic (David Miller) to provide Dunn with his fourth triumph on the card.

“I just sat back and waited with her,” said Dunn. “She is very intelligent, and nothing really bothers her.

“For some horses the transition from three to four can be little difficult but she’s come back stronger than ever."

Bella Bellini competes as a homebred for David McDuffee and beating males from tough posts has not proved to be a problem. The mare defeated males in the $432,000 Hambletonian Maturity on July 16 from post position 11.

Bella Bellini’s win gave Dunn a clean sweep of two feature events at the oval, but he gave all the credit to the mare.

“The great ones like her make you look good,” he said.

Belli Bellini paid $6.40 to her supporters at the windows.