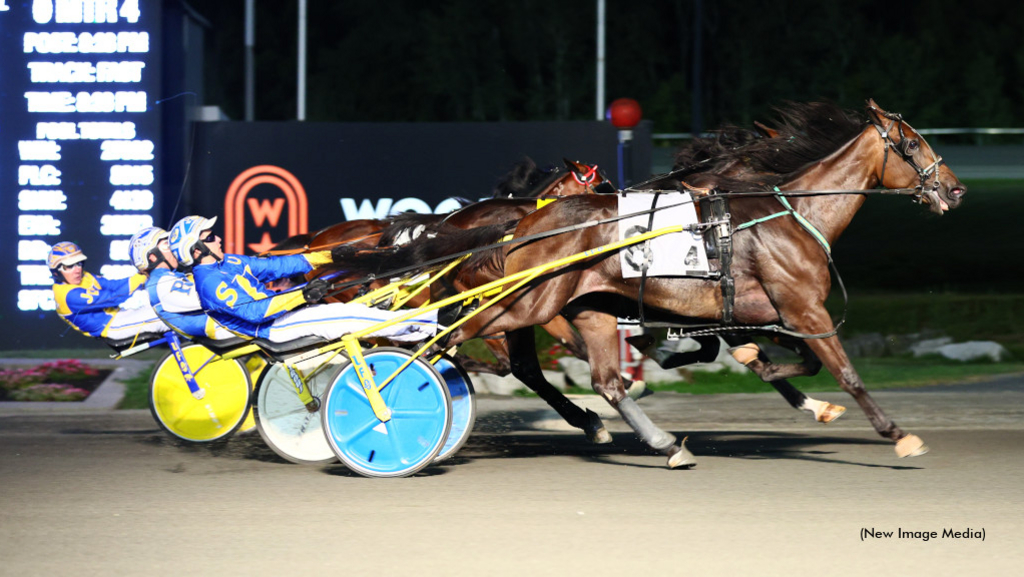 The Ontario Sires Stakes Grassroots Semi-Finals for two-year-olds were held Thursday (Sept. 22) evening at Woodbine Mohawk Park, each with a purse of $20,000.

Divinne Magic captured the first division for two-year-old filly trotters in the program opener. The Muscle Mass filly out of the Kadabra mare Magic Meds was the first out of the gate and to the front before Angelic Kt (Chris Christoforou) took over at the :29.3 first quarter. Its Sally Deal popped off the pylons from the four-hole, clearing the top before the 1:00 half. Angeliki (Sylvain Filion) pulled, flushing Divinne Magic (Trevor Henry) off of the pylons. Divinne Magic took control of the field at the 1:30.4 third quarter and with a :29.4 last quarter, won by half a length in 2:00.3.

Divinne Magic charted her second win in a row in the Grassroots Series, her second in five lifetime starts and now has $28,110 in earnings. Keith Jones trains the filly for owners Maggie Jones, Susan Heard, Jody Simmons and Philip Newfeld.

The second division of two-year-old filly trotters was taken by Lucy Who (Trevor Henry). The Julie Walker trainee went wire-to-wire in fractions of :28.3, :59.1, and 1:29.1 to a final time of 1:59.1. She won by a head over Sweet Carrie T (Bob McClure) and No Angel Like Me (Sylvain Lacaille).

Lucy Who is out of the Angus Hall mare Jayport Destiny and by Wheeling N Dealin. Owned by Murray Bradshaw, she collects her fifth win in seven starts, lifting her career earnings to $56,000. The filly is currently leading in the Grassroots ranks.

Bob McClure drove Twin Delight to a 1:53.4 new lifetime mark in the first division for two-year-old filly pacers for trainer Shawn Steacy. The favourite, Cheese So Pretty (James MacDonald), controlled the fractions of :27.2, :56.4 and 1:25.2, but was bested at the wire by a nose by Twin Delight, who climbed towards the top on a first-over trip.

Twin Delight is a Bettors Delight filly out of the Sportswriter mare Twin B Cheeks. She is owned by Hutt Racing Stable and secured her fourth win in seven starts. Career earnings list as $49,126 in her 4-2-0 record.

In the second filly pacing division, Grandeur Seelster (Austin Sorrie) collected a new lifetime mark of 1:53.3 off a wire-to-wire trip. Marcel Barrieau trains and co-owns the All Bets Off-Glamour Seelster-Jeremes Jet filly for owners Gestion Mastel Inc. and Courtney Gallant. Her record of 3-2-1 in seven starts sums $44,762 in earnings.

In the first colts and geldings trotting division, Austin Sorrie and New Rules cleared to the top first before First Digit (Jody Jamieson) took over at the :28.1 opening panel. Take On Me (Louis-Philippe Roy) took the lead at the :57 half and opened up on the rest of the field. New Rules pulled around First Digit at the three-quarter pole, closing the gap between himself and Take On Me. At the wire, New Rules nabbed Take On Me by a neck. Rough Tuff Tested (Jonathan Drury) finished a close third.

New Rules is trained by Marcel Barrieau, who co-owns the Lookslikechpndale gelding with Gestion Mastel Inc.

All Star Yankee (Jonathan Drury) won the second division of colt and gelding trotters for trainer Blake Macintosh in 1:56.3. All Star Yankee followed a two-hole trip to the stretch through fractions of :28.1, :58.2 and 1:27.2 before pulling out of the pocket to a three-quarters of a length win over Watch A Pro (Matthew Bax). James MacDonald drove Nothingbutadreamer to round out the triactor.

All Star Yankee paid $32.70 to win for owners Hutt Racing Stable, Blake Macintosh and Van Camp Trotting Corp. The win is the first career victory for the My Mvp colt.

Ahi Sunshine, ranked second in the Grassroots leaderboard, took the first division of colt and gelding pacers in 1:52.3 with Bob McClure on board. McClure settled the Sunshine Beach colt into fifth position on the rail through the :26.4 quarter and :56.1 half. The pair followed cover provided by Shadows Terror (Chris Christoforou) to the three-quarter pole in 1:24.2 when Christoforou moved Shadows Terror back to the rail. McClure kept Ahi Sunshine moving on the outside to a 2-1/2-length victory over Watch My Chips (Douglas McNair) and Slick N Quick (Louis-Philippe Roy).

Reign Supreme closed out the Thursday card with a wire-to-wire triumph in the second division of colts and geldings pacers. Driver Louis-Philippe Roy controlled the timer in splits of :26.1, :55.4, 1:24.2, and stopped the clock in 1:52.1. The Golden Jet (Jody Jamieson) followed in second and Hes A Sweetheart (James MacDonald) rounded out the triactor.

Reign Supreme is trained by John Pentland for owner Zachary Carroll. Out of the Big Jim mare Amulet Seelster, the Control The Moment colt won his fourth of six starts with $48,432 in earnings. The 1:52.1 victory is a career best for the colt.

Racing action continues on Friday at 7 p.m. at Woodbine Mohawk Park with Semi-Finals for three-year-olds taking place. All of the Grassroots Finals are on Oct. 1 at Mohawk.