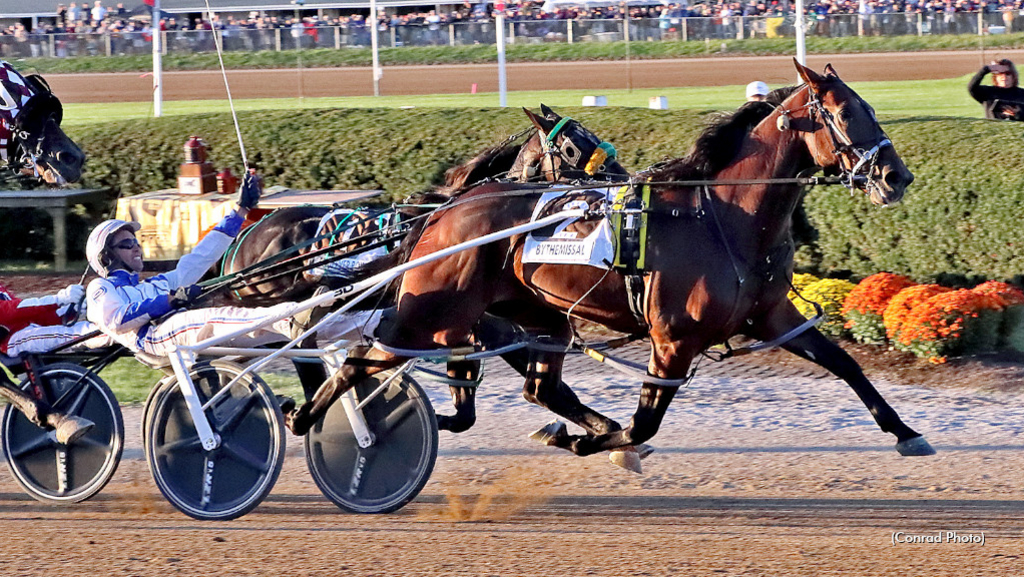 Bythemissal took aim of fellow elimination winner Fourever Boy on the front turning for home and battled ahead to win the 77th edition of the Little Brown Jug for three-year-old pacers on Thursday (Sept. 22) at Delaware County Fairgrounds.

After dominating his elimination earlier in the day, Bythemissal won the $541,550 final in front of a crowd of more than 42,000 attendees in 1:51.1 to give trainer Ron Burke back-to-back Jug wins and his fourth victory in this Pacing Triple Crown event. 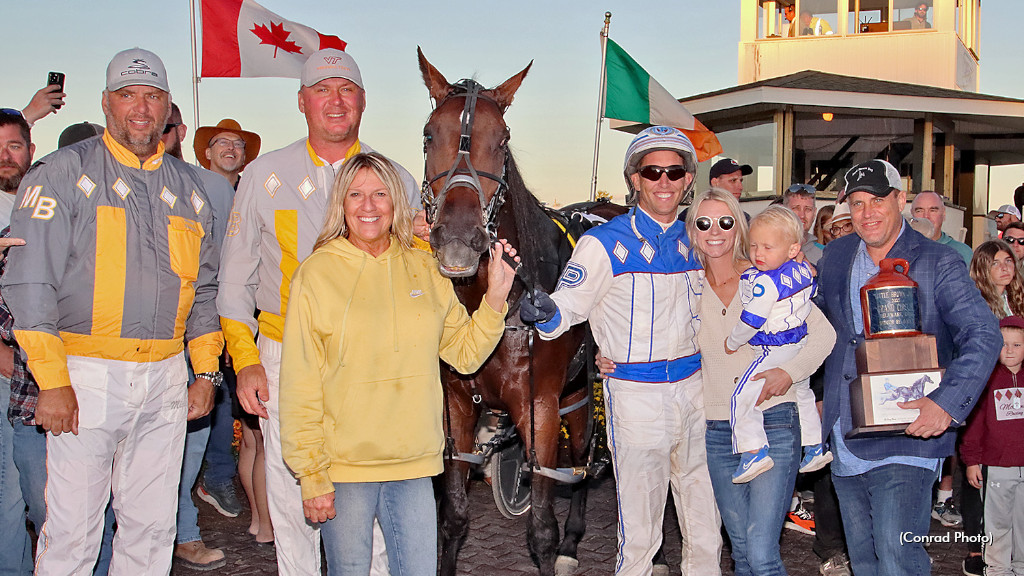 Driver Chris Page, 38, fulfilled a childhood dream winning the race that hooked him on harness racing when he first attended in 1994 with his family.

"I haven't missed one since so to actually win it... this is what pulled me in and made me want to drive horses and I fell in love with it," said Page.

Starting from post two in the final, Bythemissal and Page followed inside leaver Fourever Boy and Dexter Dunn while Atlas Hanover (Anthony MacDonald) was left parked out through panels of :27.1, :55.3 and 1:24.1.

The other Burke contender, Birthday (Ronnie Wrenn Jr.), went three-wide past Atlas Hanover down the backstretch, but the elimination winners faced off in the final turn as Page pulled Bythemissal from the pocket and forged ahead at the top of the stretch, winning by three-quarters of a length.

Fourever Boy held on for second-place just ahead of Night Hawk (David Miller), who closed off a three-hole trip. Six Feet Apart (Matt Kakaley) followed in fourth with Birthday rounding out the top five finishers.

"Tim Twaddle has done a good job with that horse [Fourever Boy] and Dexter Dunn is a magician in the bike so you never count them out, but the first elimination, my horse was very well wrapped up and well within himself so I was very confident in him."

A $45,000 supplemental entry, Bythemissal lived up to his connections' expectations.

"I really believed he was the best horse today and I thought he drew in a great spot," said Burke. "I knew Chris would be confident enough to give him the right trip."

After winning his only start at a two-year-old, Bythemissal has finished no worse than second in a dozen sophomore starts, winning 10 and banking more than $830,000 for owners Burke Racing Stable of Fredericktown, Pennsylvania, Eric Good, Denton, Maryland, Rich Lombardo Racing of Solon, Ohio, and Weaver Bruscemi of Canonsburg, Pennsylvania.

The Downbytheseaside-Dismissal gelding is the first Ohio-bred Jug champion since 1988 winner BJ Scoot.

"I was fortunate enough to sit behind the sire of him, Downbytheseaside, who is also a great horse," noted Page when asked about the top horses he's driven. "But winning the Little Brown Jug has been my dream ever since I was a little tyke so today I feel like somebody oughta pinch me like I'm going to wake up sometime."

Bythemissal paid $2.80 to win as the favourite.

Next up for the Jug champion is the Ohio Sire Stakes final next week at Hollywood Dayton.

It was a big day for Burke, who also won the Miss Versatility Trotting Series final with Atlanta and watched S I P set a world record on the undercard.

Recaps of the Little Brown Jug eliminations are below.

Bythemissal delivered on his 1-9 pari-mutuel promise, easily disposing of his four rivals in the first $50,000 Little Brown Jug elimination heat on Thursday (Sept. 22) at the Delaware County Fairgrounds.

Chris Page settled Bythemissal ($2.30) into second heading into the first turn, allowing Market Based (Andy McCarthy) to clear to the lead from post three and front the field with a :27.1 quarter. Page had Bythemissal on the move down the backside and landed on top before the three-eighths mark. It was lights out from there as Page punched out middle panels of :55.3 and 1:24.1 before opening up in the final quarter. With a :27.2 closer, Bythemissal had a four-length cushion on his opponents and tripped the timer in 1:51.3. 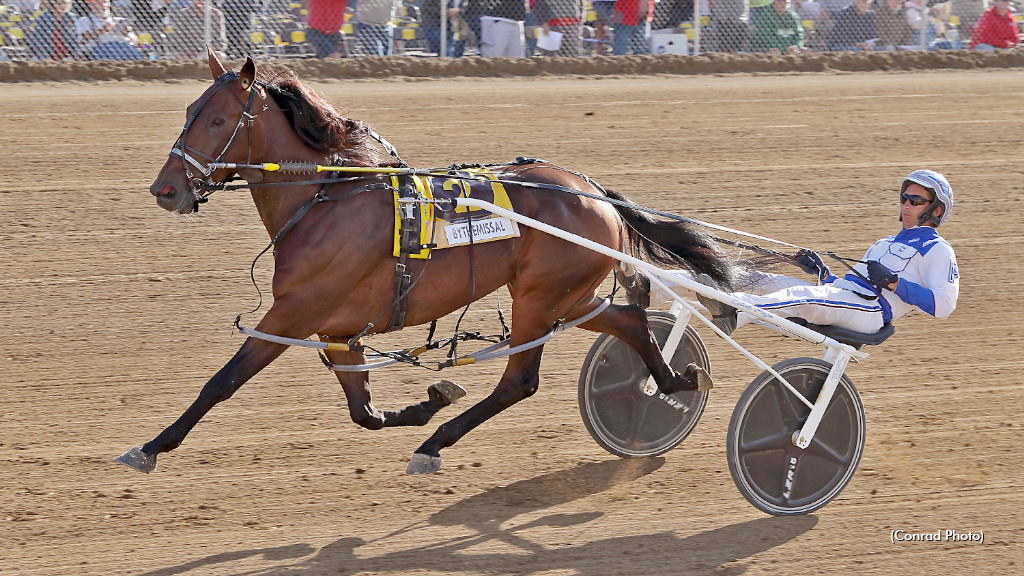 Bythemissal (Downbytheseaside - Dismissal) is trained by Ron Burke for owners Burke Racing Stable LLC of Fredericktown, Penn., Eric Good of Denton, Md., Rich Lombardo Racing LLC of Solon, Ohio and Weaver Bruscemi LLC of Canonsburg, Penn. The half-mile track world champion hasn't finished worse than second in his career, now sporting a lifetime summary of 10-2-0 in 12 starts with nine of those wins coming in 2022. His earnings now stand at $562,750.

Fourever Boy, the 3-5 favourite with Dexter Dunn aboard, swept by in the stretch to win the second $50,000 elimination for the Little Brown Jug in 1:51.4.

Firing off the gate from the outside six post, supplemental entry Pleaseletmeknow (Matt Kakaley) took the lead at the :26 quarter pole from inside starter Birthday (Ronnie Wrenn Jr.) while PJ Lou (Mike Wilder) tucked into third ahead of Gulf Shores (Yannick Gingras).

Meanwhile, Fourever Boy got away fifth and followed the cover of Gulf Shores as the field raced in front of the grandstand past the half in :55.1 and into the backstretch with Six Feet Apart (David Miller) following from the back.

As Gulf Shores wrestled the lead away and drew clear past three-quarters in 1:23.4, Fourever Boy kept on rolling and swept by in the stretch with Six Feet Apart closing for second over fellow Brian Brown trainee Gulf Shores. Birthday finished fourth to earn the remaining spot in the final. 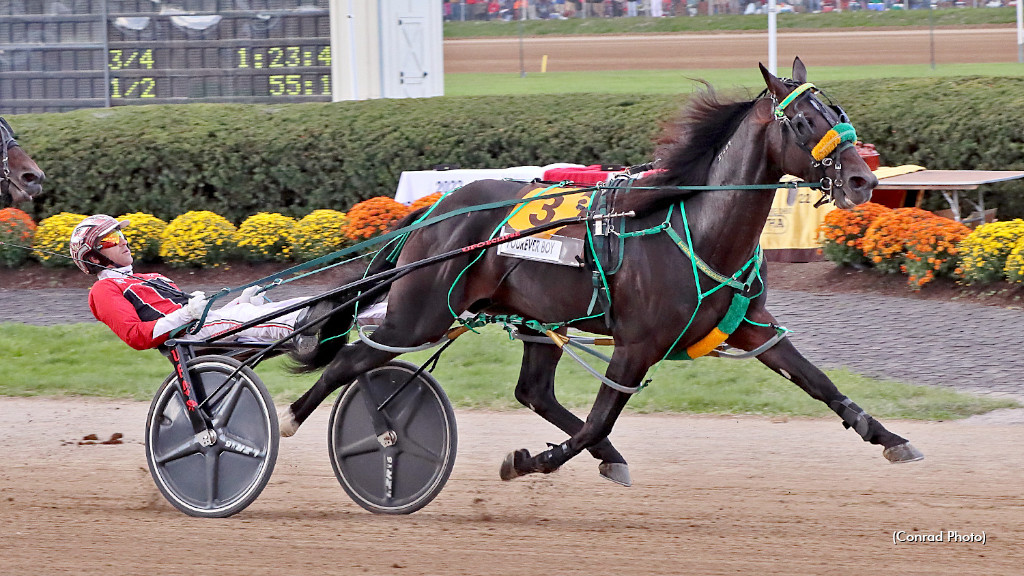 Fresh off back-to-back victories in the Pennsylvania Sires Stakes Championship and Simcoe Stakes, Fourever Boy paid $3.40 to win as the bettors' choice.

"If it gets any better than this, I won't be able to stand it," said trainer Tim Twaddle, who co-owns the Sweet Lou-Macharoundtheclock colt with Mickie Rae Stables. "He's just been such a treat and coming along so nicely. I've just been so blessed."

The victory was the fourth from 16 starts this year for Fourever Boy, lifting his seasonal earnings to $331,986.

Dunn, fresh off his Jugette victory yesterday with the Nancy Takter-trained Treacherous Dragon, will be looking to sweep the Delaware main events this week with Fourever Boy getting the inside post for the Race 19 finale.

The post positions for the Little Brown Jug final, which will close out the card as Race 19, are listed below.

Live video and program pages are available for the 77th edition of the Little Brown Jug, set for Thursday afternoon (Sept. 22) at the Delaware County Fairgrounds.

Eleven three-year-old pacers have been parsed into a pair of $50,000 elimination heats, carded as Races 15 and 16, with the top four finishers advancing to the $541,550 finale later on the card as Race 19, which has an approximate post time of 5 p.m.

Trainer Ron Burke will attempt to win the Delaware County Fair main event for the second consecutive year.  Lous Pearlman gave Burke his third Jug victory in 2021 and this year he has a pair of contenders including Birthday and the supplemental entry, Adios and Milstein champion Bythemissal.

Two of the P.E.I.-born MacDonald brothers are among the Canadian connections in this year's Jug, with Anthony driving Atlas Hanover for Guelph, Ont. trainer Jason McGinnis and part-owner Thestable Atlas Hanover, and Mark driving Greatest Ending for trainer Ian Moore and owner Reg Petitpas of Irishtown, N.B. Moore, a P.E.I. native and resident of Cambridge, Ont., previously won the 2008 Jug with Shadow Play.

The connections of Bythemissal and Messenger champion Pleaseletmeknow supplemented to the Little Brown Jug for a fee of $45,000.

The complete fields for the elimination heats are listed below in post position order.