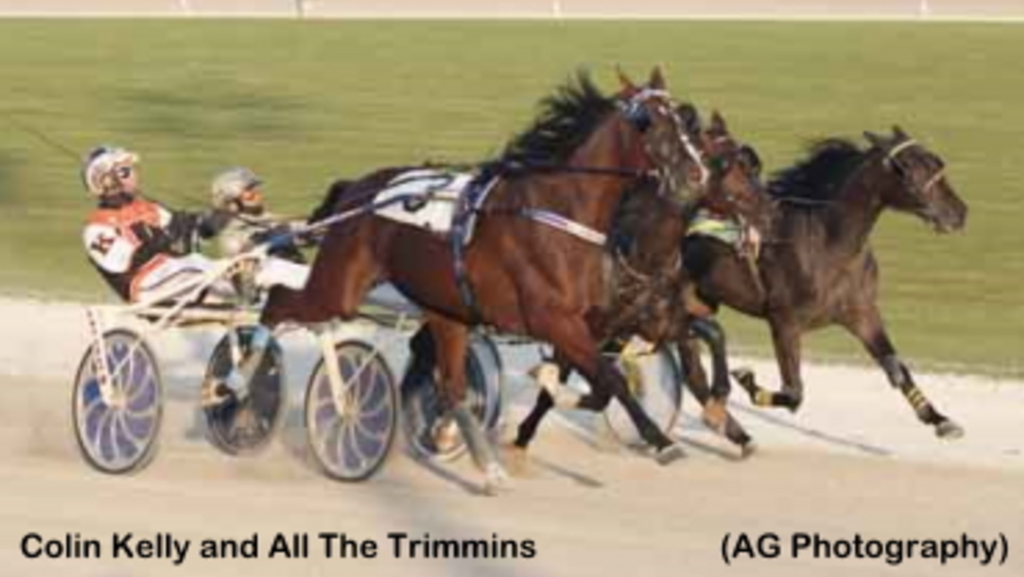 There was some milestone watching going on Monday evening at Grand River Raceway as driver Colin Kelly entered the card sitting with 999 victories under his belt.

It didn’t take the young reinsman long to celebrate the memorable win as he found his way to victory lane in the opener with the Rick Zeron-trained All The Trimmins.

Kelly got away fourth with the favourite before asking him to go first over on the way to the half. Kelly and his charge showed a short lead while racing parked past the three-quarter pole, and they wound up digging in late to post the win by a half-length margin over Mr Wheeler in 2:02.2.

Outlawgrabbingears was a front-stepping winner in the $12,500 Preferred 2 for horse and gelding pacers for trainer/driver Paul Davies, who co-owns the gelding with Nicole Davies and Deborah Pinel.

Sent off as the 6-5 favourite, the four-year-old son of Smart Shark-Grand Slam Woman won for the fifth time this season from 12 assignments. The 21-time winner has banked more than $270,000 to date.

Carsons Shadow pulled himself out of a recent slump with a 1:54.2 triumph in the $10,000 Preferred 3 for horse and gelding pacers.

Sent out by trainer Vicki Gregg, the gelding got away in mid-pack before following cover on the way to the half. He was still tracking cover on the outside until the late stages of the mile. He kicked home in :28.4 for driver Jason Ryan en route to posting the win by 1-1/2 lengths over Paparazzi Hanover. Mercenary, who was involved in producing fractions of :27.4, :57.2 and 1:25.1, was third.

Sent off as the 1-2 favourite, the homebred son of Shadow Play-Carsons Ladyluck won for the second time this season and for the ninth time in his career. The four-year-old has banked close to $110,000 for owner/breeder David Carson of Listowel, Ont.

Easton Beach went down the road in his $10,000 Preferred 3 assignment for horse and gelding pacers.

Sent off at odds of 13-1 for trainer/driver George Ketros, Easton Beach shot to the top from Post 1 and successfully led the field through fractions of :28.1, :58.1 and 1:27.2 before using a :28.1 final frame to win by three-quarters of a length over heavily favoured Rootin Tootin in 1:55.3. Premier Joy A was third.

Mary Ketros of Arthur, Ont. owns the four-year-old son of Somebeachsomewhere-Easton Alliance N who won for the fifth time this season from 13 assignments. The nine-time winner is just shy of $60,000 in lifetime earnings.