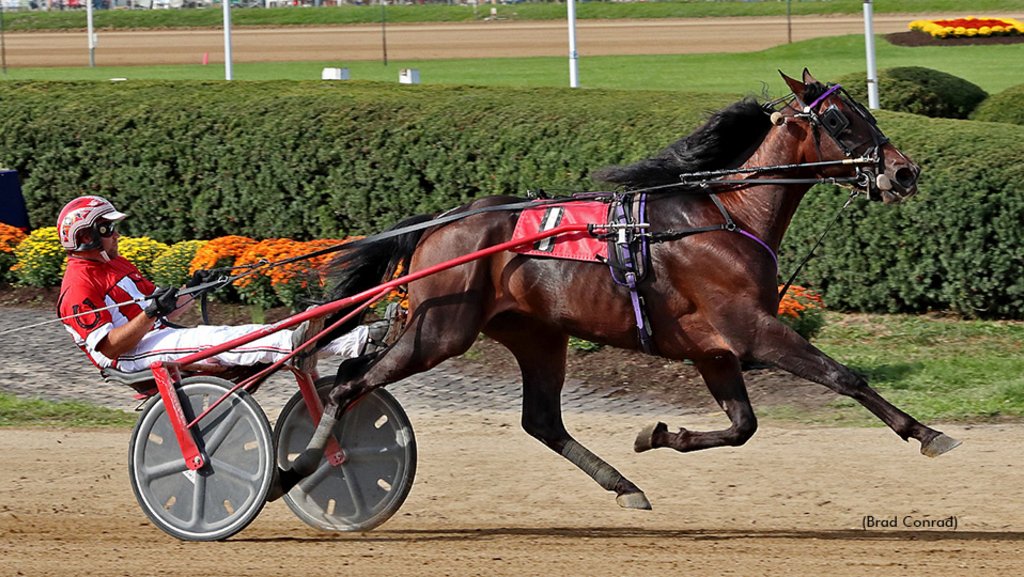 When the gate’s wings folded, Kauffman hustled Rumble Strips out of his rail position and rebuffed an early challenge by Black Magic (Chris Lems), tripping the quarter-mile timer in :28.1. As the field of six passed the stands in :57.3, A Real Legend (Don Irvine Jr.) was the first to tip to the outside. Rumble Strips went past the three-quarter pole in 1:25.3 and used a :27.4 final quarter to establish a new world mark of 1:53.2 on a half-mile track for two-year-old male trotters. Black Magic held on to second and Burtons Hill (Brett Miller) rallied for the show spot.

The new world champion is conditioned by Mike Polhamus for Constance Polhamus and Mary Beth Walters. With the lions share of the purse, the Long Tom colt’s earnings jumped to $126,144.

The sire Downbytheseaside has dominated Ohio pacing ranks the past two years, now he is taking on the trotters.

Hank LeVan guided Frantastic L to a gate-to-wire win over Mission Valley (Ronnie Gillespie) by 2-3/4 lengths in 1:57.1 to take the first division. LeVan Stables Inc., Darmofal Racing, Edward Perry and Megan Levan own the daughter of Team Six. With the win, Frantastic L now has 10 wins in 16 seasonal starts.

A Long Dream (Brett Miller) came from off the pace to sweep past the tiring leaders to take the third division in a lifetime best 1:57.2. Go Long Kate (Aaron Merriman) and Aquatica (Jason Thompson) were second and third. First Up Racing Stable and Elise Kilmer share ownership of the Long Tom filly. Vernon Beachy is the winning trainer.

Smokinhotirishgirl used a patient drive by Anthony MacDonald to take the second division in 2:00.4. The Uncle Peter lass sat behind the pacesetting Gabbys Teddy Bear (Aaron Merriman) until the top of the stretch and sprinted clear by 2-1/4 lengths. TheStable.ca and Hutchison Harness share ownership in the three-time winner. Jason McGinnis is her trainer.

The Spring Haven Farm Ladies Driving Championship went to Poof Daddy and Krista Harmon in 1:55.4. The event features the top point-earners from the season-long pacing series restricted to female pilots. Poof Daddy defeated Speaking Out (Amy Wengerd) and Sister Said (Emily Hay). The seven-year-old Woodstock gelding is also owned and trained by Harmon. With the win, Poof Daddy’s career earnings stand at an even $100,000.

The 21-race Wednesday card, featuring the 52nd edition of the Jugette, will go postward at 12 noon.