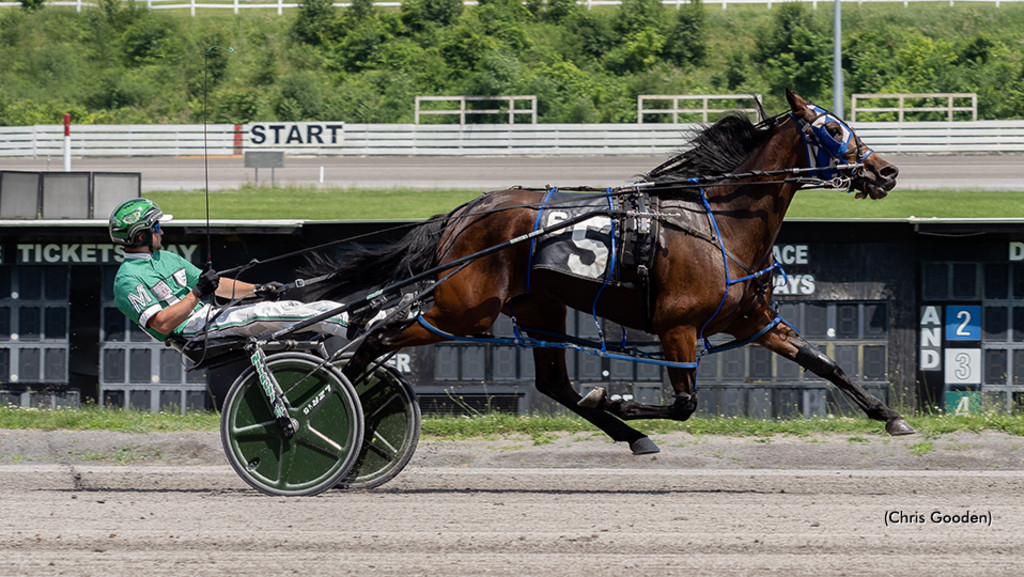 Pennsylvania Fair Sire Stakes racing stayed at the local fairgrounds in Gratz, Pennsylvania this past Sunday and Monday, with the regular fair meet following the special “two-day Sire Stakes” event the previous week. And the speed show continued, as for the second straight week a two-year-old filly went the fastest mile ever for her division at a Pennsylvania fair.

In the spotlight this week was Little Lady J, a daughter of A Rocknroll Dance–Monets Lilly driven by Hugh O’Neil who blitzed the Gratz half-miler in 1:57.3 – and needed to, as the ultra-consistent Rambling Ruby was just a nose off at the finish during the Sunday card for two-year-olds. The victory was the ninth of Little Lady J’s young career, which ties her for North America’s winningest horse in her division; it was also the fastest mile of the two-day event, even better than any three-year-old’s clocking.

The speed records broken by the historic mile were the local record of 1:58.3 by Dream Dancing in 2019 and the state record of 1:58 set by Crew Sock Hanover at Bloomsburg a year earlier. All three fillies – and several other good ones – came from the barn of veteran David Brickell and his son-in-law Mitchell York, a retired Pennsylvania state trooper who now is trainer for Team Brickell/York and also owns Little Lady J, who also was beaten only a nose in her pari-mutuel Stallion Series final. Little Lady J joins her trotting compatriot Quarantina, whose 2:00.1 effort here during the first meet was also a fair record for the state.

Keeping up his major efforts in the PA Fairs speed department was the Captaintreacherous–Well Whats New freshman pacing gelding Captaincountrystar, who used a :28.1 last quarter to win in 1:57.4 by more than 16 lengths for driver Cody Schadel and trainer/father Todd, who is also co-owner with Andy Miller Stable Inc. and Wallace Townsend Jr. It was the fourth 2:00 mile at the fairs for the baby; only Buchannon Hanover, whom we’ll read about a little later, has more, and only Buchannon and now Little Lady J join him in having more than one.

Monday’s racing was topped by the fastest trotting mile of the year at the PA fairs, a 1:59.4 jaunt by the Bar Hopping colt Bar Coins, who was handled by Cody Schadel, again for trainer/father Todd, who is co-owner with wife/mother Christine and Rick and Regina Beinhauer.

Two horses, the pacing colt Buchannon Hanover and the trotting filly Heart Matters, won for the 10th consecutive time along the fair circuit Monday. The Always B Miki colt Buchannon Hanover posted his sixth 2:00 mile of the twicearound circuit’s campaign with a 1:58.4 triumph, while the Explosive Matter miss Heart Matters remained undefeated in her fair stint with a 2:03 tally. Both big winners are trained and were driven by Todd Schadel and co-owned by wife Christine; Heart Matters’ ownership is also shared by Rick and Regina Beinhauer.

Aaron Johnston and Wayne Long each took five turns back to the Gratz Victory Lane to tie for honours at the meet. Four of Long’s winners came from his barn to enable him to tie with Todd Schadel in the trainer standings for the meet lead.

With only two more stops to come on the Pennsylvania Fair Circuit – Bloomsburg on Friday and Saturday at 11 a.m. and Meadville Two-Day on Monday and Tuesday at 1 p.m. – the title of a division’s leading fair point-winner, and the accompanying commemorative and treasured blanket in the stable’s colours, has been settled only in the two two-year-old pacing sections, with the male Captaincountrystar and the female Rambling Ruby having an insurmountable point lead according to unofficial records (the Pennsylvania Horse Racing Commission is the final authority on these events).

Of the other six battles to be decided, perhaps the most interesting is in the sophomore pacing filly ranks, between Bettor Strait N Up, who won both her point total and Championship races at two and currently is fractionally ahead on points over the rampaging Cathy Hanover, because if Bettor Strait N Up would be able to capture both titles at three she would be the first fair horse ever to win all four competitions.