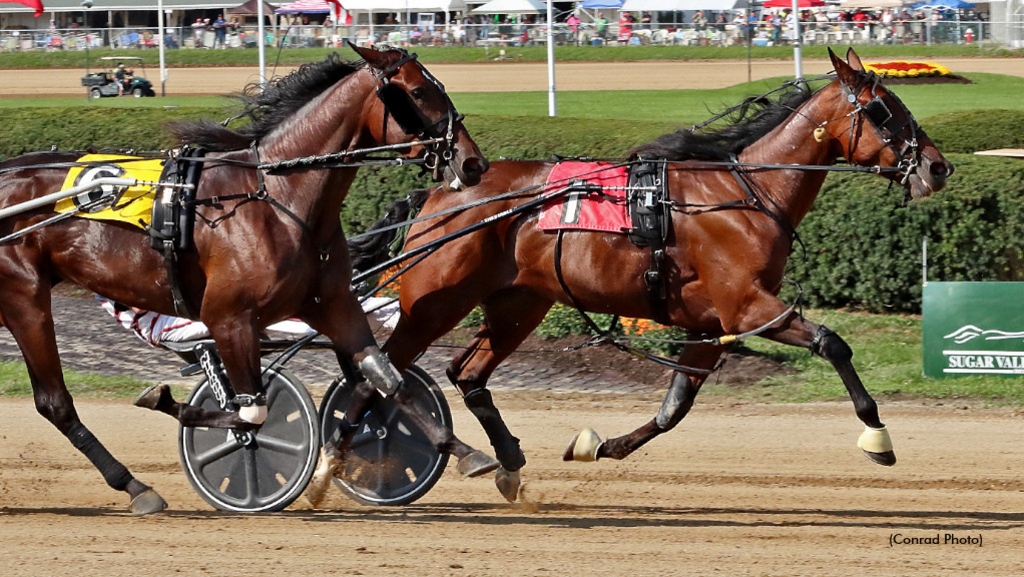 Sweet On Pete and Gabbys C Note both led gate-to-wire to take their respective divisions of the $105,514 Ohio Breeders Championship for sophomore filly trotters in Monday action at the Delaware County Fair.

When the wings of the starting gate opened for the second division, driver Anthony MacDonald protected his filly’s rail position and led the field through fractions of :27.1 and :55.3. The pair opened a four-length lead at the three-quarter pole in 1:24. Favourite Aunt (Brett Miller) made a late three-wide move but came up a neck short in 1:54.3.

The Uncle Peter lass is owned by the fractional ownership group, TheStable.ca, and Hutchison Harness and trained by Jason McGinnis. Sweet On Pete won for the 10th time in 22 career starts and pushes her career earnings to over $144,000.

The first $52,757 division went to Gabbys C Note (Aaron Merriman), the heavy betting favourite, who cruised to a half-length win over the fast-closing Abby D (Tyler Smith) in 1:56.1. Sandis Commando L (Hank Levan) was another length back in third.

The homebred daughter of Triumphant Caviar is co-owned by Charles, Johanna and Christopher Beaver and Steven Zeehandelar. Chris Beaver, who picked up three wins on the day, handles her training duties. Gabbys C Note continues her dominance of this division, winning for the ninth time in 11 seasonal starts and is 13 for 17 lifetime.

Odds On Capitalism (Brett Miller) took the fastest of the four $17,500 Buckeye Stallion Series divisions of the three-year-old colt pace. The Fear The Dragon gelding defeated Rose Run Xplosion (Chris Page) by a half-length in a lifetime best 1:51.1.

Odds On Capitalism is trained by Virgil Morgan Jr. for Dana Parham’s Odds On Racing.

Chris Page found himself in the winner’s circle after the first division as a driver and co-owner of Dirge. The Mcardle gelding won for the first time this season in 1:51.2. Page shares ownership with Kirk Nichols.

Trainer Kelly O’Donnell teamed up with the Emerald Highlands Farm to take two of the divisions with No Fear Intended (Chris Lems) in 1:56 and Colorful Dragon (Ronnie Wrenn Jr.) in 1:55.2.

The 17-race Tuesday card gets underway at 1 p.m.