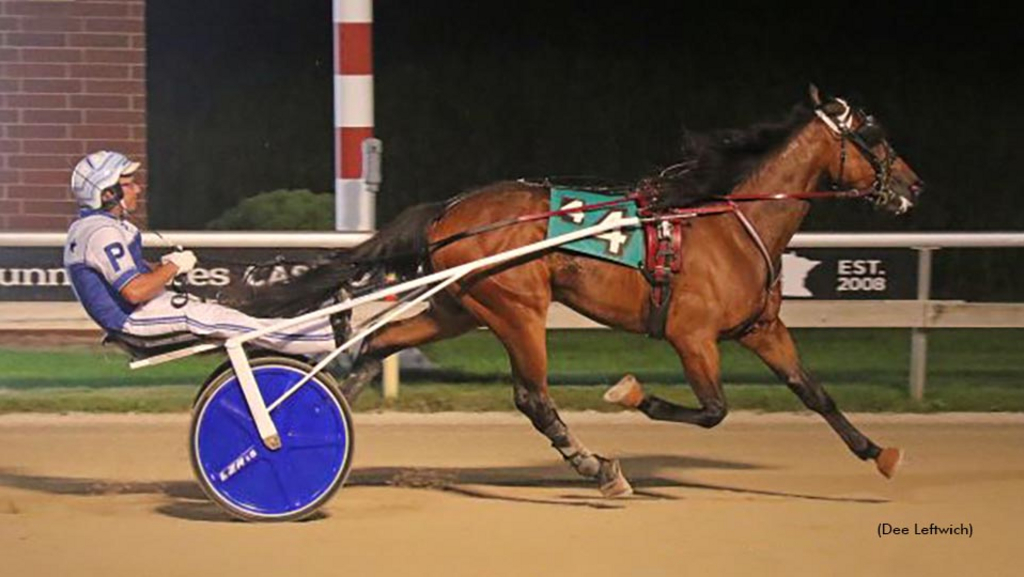 Running Aces capped off its most successful season to date with a great edition of the Minnesota Night of Champions on Saturday (Sept. 17). A record single-night purse total of $720,000 was offered for the best Minnesota-sired trotters and pacers in 12 divisional championship races that went for $60,000 each.

Bringoverthemoney (Dean Magee, $3) delivered the most dominant win of the evening, taking the aged male trot championship by 5-3/4 lengths in a seasonal best time of 1:55 for his third consecutive Night of Champions win. The impressive son of Money Talks has now earned $284,161 in his career to date. 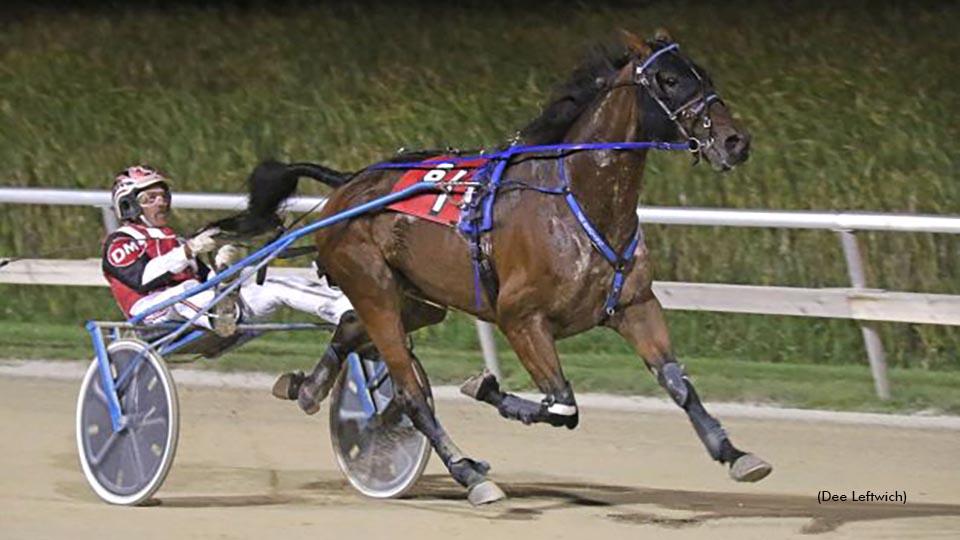 Magee floated away in third from post one with the heavy favourite while Major Al Mar (James Kennedy) and Ice Titan (Mooney Svendsen) went to the front through the opening fractions of :28 and :57. Magee activated Bringoverthemoney first-over as they rounded for the backstretch and took the lead as they headed into the final turn while Hearduwhispermynam (Luke Plano) closed sharply from the back of the pack with Al Mar Spicey Talk (Rene Goulet) following. In the lane, Bringoverthemoney powered away from his rivals and the race was clearly for place. Hearduwhispermynam held gamely for second while Al Mar Spicey Talk was a hard-trying third.

Both the winner and the third place finisher are owned by Joshua Horvat and trained by Katie Horvat, who is also the winning breeder.

Iron Sharpens Iron (Luke Plano, $2.10) did not disappoint his fans, posting another sharp win while equalling his own track record of 1:58.1 to take the freshman male trot and post his ninth straight victory.

Plano wasted little time in sending the 1-20 favourite to the lead, settling on top just after the (:28.1) quarter-mile. Early leader Wisco Wild Card (Tony Kerwood) tracked intently from second and was a strong presence in the pocket throughout the affair. Iron Sharpens Iron was very comfortable on the lead while posting a :59.2 middle-half and it was clearly down to the top two as they rounded for home. In the lane, Wisco Wild card angled from the pocket but Iron Sharpens Iron responded immediately and was clearly the best, drawing clear by two lengths at the wire. Whata Tettegouche rallied late to be a clear third.

Iron Sharpens Iron (pictured on top) now has 11 wins in 12 career starts and has banked $111,605 to date. The Banker Volo gelding became the first two-year-old to break the $100,000 barrier in seasonal earnings in the Minnesota program. He is owned by his breeder Jeralene Roland and is trained by Dan Roland and assistant Angie Coleman.

Teachmehowtotory (Rick Magee, $4.20) captured the aged mares trot division with a sharp gate-to-wire score by 1-1/4 lengths in 1:58.2 for her second win of the season and 16th career tally. The bay daughter of Braggart was bred by Glen Sauder and has now earned $197,579 in her career for owners Set The Pace Racing and trainer Jessica Johnson. Coatofmanycolors (Plano) was second best and SB Madam Secretary (Chip Lackey) got home in third.

Al Mar Richs Jetta (Brandon Jenson, $3.40) delivered a sharp-looking win in the freshman filly trot for her third career tally. The daughter of Lear Jetta was always in control after taking the lead just past the quarter and she turned back a strong mid-race challenge from runner-up Caronamar (Mooney Svendsen) to post a 1-1/2 length victory in 2:02.3, while longshot Wisco Tootsie (Dan Roland) picked up third money. The winner was bred by Al-Mar farms and is owned by Larry Jenson and trained by Brady Jenson.

Wavzeka (Rick Magee, $8.40) converted a perfect pocket trip into a championship win in the freshman filly pace, posting a three-quarter of a length tally in 1:59.3 over a fast-closing Anotherflasywoman (Dean Magee) and Quite The Flirt (Plano) in a thrilling stretch-drive that saw all seven starters lined across the track at the finish. The winner is a daughter of Arts Chip who now has three wins in 10 career outings for owner/breeder  Jay De Long and trainer Justin Anfinson.

Kitty Wampus (Mooney Svendsen, $7.20) rallied past favoured filly Give Me This Dance (Dean Magee) deep in the lane to capture the sophomore filly pace by three-quarters of a length in 1:54.4 with longshot Bekkums Fancy Star getting home in third. The winner is owned by her breeder Van Oterloo Stables and is trained by Brett Ballinger.

Curvsreasyondaeyes (Plano, $4.20) picked up his ninth win of the season in the sophomore male pace championship, equalling his career-best time of 1:54.1. Longshot SB Prince Archie turned in a career-best effort to be second by 1-1/4 lengths while Lovin On You recovered from an early miscue to get home in third. The winner is owned by his breeder Kati Sokolwski and races from the Williams Hernandez stable for trainer Maria Alvarez. The very impressive son of Easy Again has now earned $105,834 this season.

Im A Skoldier (Mooney Svendsen, $6.40) dug in gamely to score a gate-to-wire victory by a nose in the freshman male pace, holding off a furious late charge from Polar Storm (Lackey) in a 1:56.1 mile. Ex Why Zee (Rick Magee) was third-best and King Of Aces (Plano) was home fourth. The winner is a sharp son of Wind Me Up who now has seven wins from nine career starts for owner/breeder Van Oterloo Stables and trainer Bob Lems.

Twisted Bliss (Brandon Jenson, $9.40) rallied from a mid-pack trip to capture the aged mares pacing championship by 1-1/2 lengths in a career-best 1:56.1 mile. Brooklyn Moonshine (Plano) was a game second and Marced In Faith (Brady Jenson) was third. The winner is a four-year-old daughter of Its That Time, owned by her breeder Larry Jenson and trained by Brady Jenson.

Wilamar Spark (Dean Magee, $9.20) made a big mid-race move to win the sophomore filly trot by 1-3/4 lengths in a career-best 1:58 mile over race favourite Scroll On By (Rick Magee), with Triggered (Svendsen) getting home a clear third. The winner is a daughter of Southwind Flash who was bred by Jeanne Marquis and is owned by Marquis as well as Jay De Long.

Poko Loki (Lackey, $3.80) delivered as the favourite in the sophomore male trot, posting a half-length tally over Cobra Venom (Gary Magee) in 1:57.4 for a new career mark. Shadowfax (Brian Detgen) was the best of the rest in third. The winner is by Tamarind, he was bred by Set The Pace Racing and now has nine career wins and $119,522 for owners Ulf and Susan Holm-Johansen.

Watchmeneighneigh (Dean Magee, $9.40) closed methodically and powered home late to get up by a neck over Alilthundadownunda (Detgen) in the aged male pace championship in 1:53.1 for his 21st career win. SB Bodacious was third and Setoncruisecontrol (Svendsen) was home fourth. The winner is by Voracious Hanover and has now earned $245,943 to date. He was bred by Rick Davelaar and is owned and trained by Gerald Longo.

Luke Plano was the 2022 leading driver at Running Aces with 105 wins and Maria Alvarez captured the leading trainer title with 50 wins.