Charlie May Dominant In OBC Romp 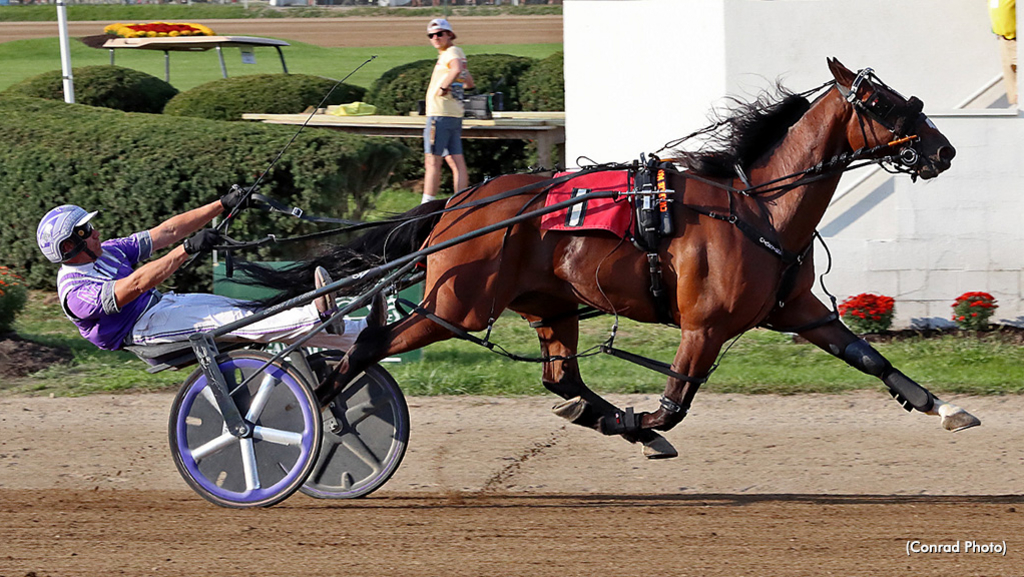 The reigning Ohio Horse of the Year, Charlie May, did not disappoint the Delaware faithful in winning the Ohio Breeder’s Championship (OBC) for aged pacers in a stakes record 1:49.4 on the opening day of the Delaware County Fair.

Driver Brett Miller used his rail position, grabbing the early lead and was able to control the field of nine and the fractions of :26.1, :55 and 1:23. The McArdle gelding used a :26.4 final panel to score a 3-1/2-length win over Odds On Shaggy and Cyclone Union Jack.

Charlie May won for the 24th time for owner-breeder Don Tiger and trainer Steve Carter. Next on Charlie May’s dance card will be the Dayton Pacing Derby on Oct. 1.

Fear Of Sports led gate-to-wire and held off a furious rally by Mcseaside to take the $127,114 second division of the Ohio Breeder’s Championship for freshman pacing fillies in a stakes record 1:52.3. The homebred daughter of Fear The Dragon won for the sixth time in eight starts this season. Fear Of Sports is owned by the Emerald Highlands Farm and trained by Kelly O’Donnell. Tyler Smith drove the winner.

Kassagi got up in the final strides and scored a minor upset in the first $63,557 division in a wild finish. The pacesetting More The Merrier finished second, but was placed fourth for interference. Elvette Hanover and Dragon Terror were elevated to second and third, respectively. Dan O’Mara trains and Marjorie Polhamus owns the winner, who scored her second win and established a lifetime mark of 1:55. Kurt Sugg drove the winner.

Guido Di went gate-to-wire to take the fastest of four divisions of the Buckeye Stallion Series for three-year-old trotting colts in 1:54.1. The Wishing Stone gelding is trained by Steve Schoeffel for Virginia and Kathy Schoeffel, Lewis Falton and Sara Zidek. Brady Brown was in the bike.

Country Hill and driver Chris Page scored at odds of 11-1 to take the third division in 1:57. The What The Hill gelding is owned and trained by Melvin Schmucker.

The final $17,500 division went to Peterbilt and Chris Page in 1:58.2 for his owner John Holman and trainer Fred Morgan, Jr. The win was Page’s third and final victory on the 20-race card.

Alana Hill, in rein to Brett Miller, held on by the slimmest margin to defeat Ill Ante Up to take the second of three divisions of the Buckeye Stallion Series for three-year-old trotting fillies in 1:55.4. The What The Hill filly is trained by Virgil Morgan, Jr. for GC Gold Racing, Walnut View Farm and John Schlabach. Her career earnings are approaching the $150,000 mark.

The remaining divisions went to What A Victory and driver Aaron Merriman in 1:57.2, and Gracious Triumph and Don Irvine Jr. in 1:57.3.

Christina Johnson guided Crazy Bad K to a come from behind victory in the Tim Fouts Memorial Driving Championship in 1:56.

The event brings together representatives from the various amateur driving clubs across the country. Johnson was representing the Great Lakes Amateur Driving Association.

Two divisions of the Great Lakes Amateur Driving Association trot went to Lauren Harmon with Walkonthemoon in 1:59 and Jazmin Arnold with Herecomescharlie B in a stakes record-equalling 1:57.