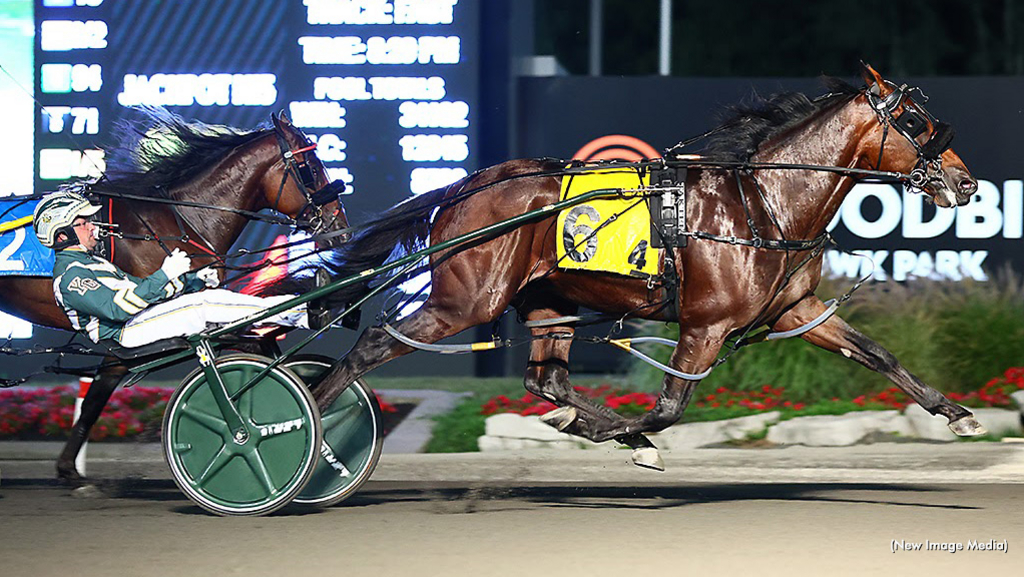 The top five finishers from each division qualified for next Saturday’s $900,000 Metro final.

In 2018, Stag Party was an impressive winner in the Metro Pace final and his little brother Save America is looking to make that a family tradition after capturing the first test.

In that elimination, the lead changed hands several times with Huntinthelastdolar first on the front at the :27.1 opener. Aces Of Aces popped out to grab the lead by the :56 half, but he was covered immediately by Moment Is Here.

First up at that point was favourite Save America, who was at the leader’s wheel by three-quarters in​ 1:22.4. Those two rookies battled down the lane, with Save America taking over in the late going to win in 1:49.4. ​Moment Is Here held strongly for second with Ace Of Aces taking third. The final two to qualify for the final were Huntinthelastdolar and Gung Ho.

A son of Captaintreacherous owned by the 3 Brothers Stable and Caviart Farms and trained by Nancy Takter, Save America now has four wins in five starts this year for $188,000 earned.

Despite coming into the contest riding a three race winning streak, the last two also Grand Circuit events at Mohawk, Gingras said that in tonight’s effort Save America finally felt like the colt he first started driving in the spring.

“The first couple of starts here [at Mohawk] he was a little bumpy at times, last week he was too aggressive on top of that, ​tonight I got the horse back that I really liked in the spring baby races. He was a gentleman to drive, two finger, I did whatever I wanted with him with no steps,” Gingras said.

“He was loaded with pace tonight, he only won by a length but I never really called on him, didn’t kick the plugs. It was a crazy good mile, especially off a half in :56 and I was sitting at least five lengths back. He was the colt I thought I had at the beginning of the year; I loved him. They’re babies, you have to tinker with them and change a few things.​ Nancy found the key to him and it was great tonight.”

In the second elimination, all eyes were on Stockade Seelster, who came into the contest undefeated in six starts to date. Unfortunately, that streak ended tonight.

With Jody Jamieson in the bike, Stockade Seelster had some company from Tickertape Hanover when he hit the opening panel in :27, but that rival instead tucked behind him and sat in the pocket when the half was hit in :55. There was lots of action in the back field when Stockade Seelster hit the three-quarters in 1:23.

“He’s always been a stop and go type colt, they liked him training down. I didn’t really like him two starts ago, he never really paced through the wire. Last week, he raced very good. He got a big last quarter and he showed he’s a pretty nice colt,” said Doug McNair, the colt’s regular driver for his dad Gregg, who trains for owners Scott Horner and Timothy Murray.

“Around the last turn he felt really good, there were two nice colts he was following. I just wanted to get him qualified for the final, I wasn’t expecting to win. I’ve been watching [the Metro] since I was a little kid, and it’s great to be in it too. The Metro would be a feather in Dad’s cap, it would be really special, but we have a long way to go yet.”

A son of Always B Miki, Tip Top Cat recorded the second win from six starts in his young career.

The draw for the Metro final will be held on Monday (Sept. 19) during the simulcast pre-game show. The $900,000 final will be contested next Saturday night (Sept. 24), Canada’s richest night of racing anchored by the Mohawk Million.