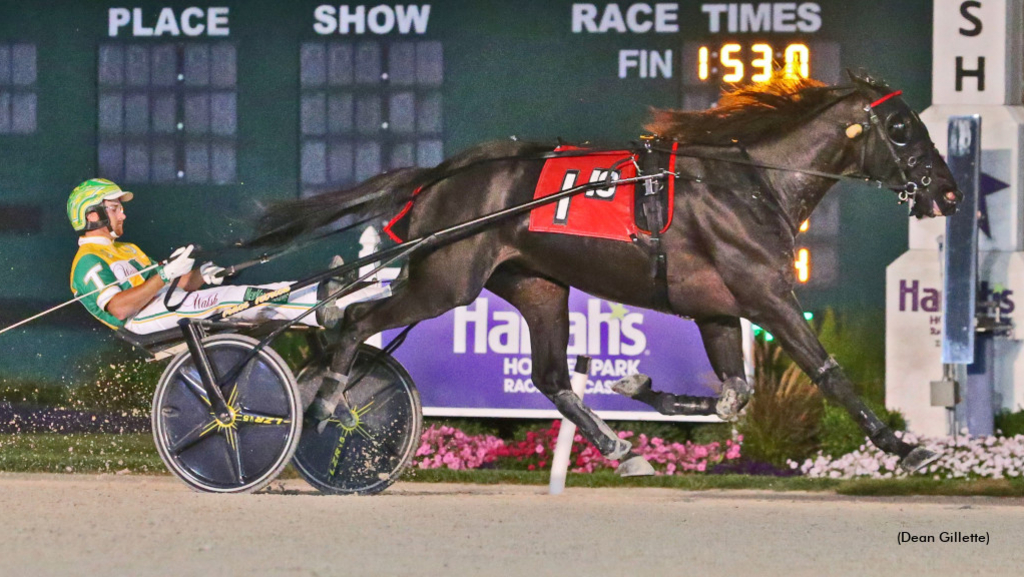 Indiana Sire Stakes action continued on Thursday (Sept. 15) at Harrah’s Hoosier Park with the sophomore trotters competing in the seventh leg of eight. Two divisions for the three-year-old trotting colts and geldings, as well as a single division for the fillies would highlight the 14-race card. All eyes were on Ponda Adventure and M Ms Dream as both entered with perfect seasons on the line, and both were poised to leave the night with their perfect records intact.

Ponda Adventure (pictured above) would be the first to extend his perfect record to 10 in a $48,000 division for the three-year-old trotting colts and geldings. Leaving from the rail, driver Trace Tetrick left aggressively protecting inside position and getting to the lead through an opening quarter of :27.4. Up the backstretch, Ponda Adventure faced pressure from 2021 Indiana Sire Stakes champion Dover In Motion and Ricky Macomber Jr. as they moved to the lead at the half in :56.4. Dover In Motion and Ponda Adventure began to gain separation from the rest of the field on the turn to three-quarters in 1:25.

With what appeared to be an impending stretch duel looming, Dover In Motion made a costly mistake going offstride at the top of the stretch. Inheriting the lead from there was a revved-up Ponda Adventure and Tetrick who powered home with a :27.2 final quarter to score by over three lengths on the line in 1:53. Swan Captain and John De Long finished second, with Yo Mister and James Yoder rounding out the trifecta.

With the victory, the Erv Miller trainee pushed his career bankroll over half a million dollars, banking now $501,912 for owners Engel Stable of IL, Andy Willinger and Jerry Graham. Bred by Pond-A-Acres, it was the 10th victory in as many tries in 2022 for the Swan For All gelding out of the Muscle Hill mare Wildflower, and career victory 18 in 20 lifetime starts.

Ponda Adventure provided driver Tetrick with the sweep of the stakes action for the trotting colts, as earlier on the card he scored with the Tyler George-trained Adamsville Road. Getting away from the rail, Tetrick steered Adamsville Road into the third position in the early stages as race favourite Late Night Hawk and Kyle Wilfong cut out the opening quarter in :28.1. Late Night Hawk remained unchallenged on the lead through a half of :57.2 before Tetrick made his move on the far turn with Adamsville Road, challenging the leader at three-quarters in 1:26.2.

As the field turned for home, Adamsville Road and Tetrick would scoot away from the field with a :27:3 final fraction to score by over a length in 1:54. Sweet Boy Ben and De Long rallied for second, with Skyway Professor and LeWayne Miller staging a bold stretch move to finish in the show position.

Owned by Mel Rose Stable and Joe Nesselroad, Adamsville Road has picked up five victories in 13 starts in 2022, banking $105,140 in his sophomore campaign. Bred by Joyce McClelland, Adamsville Road is a gelded son of Indiana’s leading trotting sire, Swan For All, out of the Yankee Glide mare, She Wore Red.

Not to be outdone by her male counterparts, M Ms Dream put on a gutsy display to score in the lone $92,500 division of Indiana Sire Stakes for the three-year-old trotting fillies. Driver Sam Widger elected to float from post six in the early stages, unable to find a spot along the rail in fifth as Jusmakinyalook and Jordan Ross carved out a :28.2 first quarter. Having no luck finding the pylons, M Ms Dream began to forge to the lead, striking the front at the halfway station in :57.2, finally crossing over to the cones entering the far turn on her way to three-quarters in 1:27.1.

In the lane, M Ms Dream's perfect season appeared to be in jeopardy as Jusmakinyalook and Ross surged up the passing lane, however, M Ms Dream dug deep with a :27 sprint to the wire to hang on to the victory by a head at the line in 1:54.1. Bluebird Dove and Peter Wrenn closed from the backfield for the third position.

Trained by Henry Graber Jr., M Ms Dream has now visited the winner’s circle in all eight of her trips to the racetrack in 2022 for owners Eleven Star Stables, Frank Baldachino and Hillside Stables. With the victory, the 2021 Indiana Sire Stakes champion now boasts a gaudy bankroll of $510,962. Bred by Mervin Miller, M Ms Dream is a daughter of Swan For All out of the Classic Photo mare, Trading Places.

Indiana Sire Stakes continue on the Friday night (Sept. 16) card at Harrah’s Hoosier Park, this time with the two- and three-year-old pacing colts and geldings highlighting the 14-race card. The card also features a $10,000 guaranteed Hoosier High Five in the Friday night finale with an industry-low takeout of 12 percent.